Andy Dalton is an anomaly.

He’s been that way since he arrived in Cincinnati. In his first season, Dalton put together an impressive rookie campaign but showed a propensity for having the occasional disaster game—look no farther than his three interception performance in the Bengals 31-10 Wild Card playoff loss to the Houston Texans. Over the next two seasons—which included two more dumpster fires in the playoffs—it became clearer that his struggles occurred mostly in nationally televised, primetime games. But this season, Dalton’s play in primetime games has deteriorated to a previously unfathomable level, and never has there been a greater illustration of the disparity in Dalton’s play in primetime vs. non-primetime situation than his past two weeks.

If you’re in a good place mentally and absolutely don’t have one single better thing to do, re-watch the Bengals offensive drives against the Browns and the Saints, one at a time, rotating back and forth. I did that this morning, and it was astonishing. Is it actually possible that the same man played quarterback for the Bengals in each of the last two weeks? Can one man, red-haired or not, complete just 30.2 percent of his passes one week and then 72.7 percent the next? The answer to that is both yes and no, and that’s the problem. Dalton can have the worst game of his career and the best game of the season in a 10-day span, and no one is really that surprised. We joke that it’s a Good Andy vs. Bad Andy thing, but he simply isn’t the same man when the stadium lights are on and he knows the entire country is watching.

Excluding the Bengals three losses this season, Dalton has completed 144-of-208 passes (69.2 percent) for 1,784 yards (254 yards per game), nine touchdowns, and six interceptions. But in those three losses (at New England in primetime, at Indianapolis, home against Cleveland in primetime) Dalton is a combined 43-of-95 passing (45.3 percent) for 396 yards (132 ypg), two touchdowns, and four interceptions. In his career, Dalton is 2-6 in primetime games with seven touchdowns, eight interceptions, and a passer rating of 66.1. Stats can be abused to over-emphasize (or de-emphasize) a player’s flaws, but these numbers are so cut and dry that they can’t be ignored. And, it isn’t just the stats. It’s body language, facial expressions, the look in his eyes when the camera cuts to a close up.

Dalton looked like he was playing two different sports in the last two games, and it was apparent from the jump. Dalton’s first pass against the Browns was an overthrow, a trend for him this season (46 total). His second attempt would’ve been perfect, had Dalton intended to throw it to Browns linebacker Craig Robertson. Then it got worse…

The Bengals’ third drive, which began at the Browns 32-yard line after a Cleveland special teams snafu, opened with four consecutive incompletions, all of which were overthrows. After being gifted a new set of downs on a pass interference call, Dalton proceeded to throw an absolute duck of an incompletion to a wide open Mohamed Sanu, who ran a perfect double-move route and would’ve scored easily on even a slightly well-placed pass. Then, on third-and-15, there was the play that best describes Dalton’s mental state during primetime games: 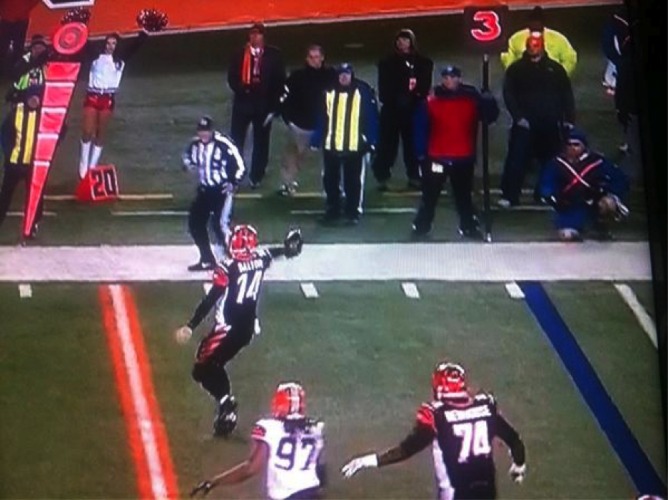 He is literally four yards beyond the line of scrimmage, and—I swear—he looked right at the down marker before doing it. Game over. This iteration of Andy Dalton is not winning an NFL game. He finished the first quarter 2-for-9 for 11 yards. By the time all was said and done (when Dalton was pulled mid-way through the fourth quarter), he had thrown three interceptions and compiled a career-low passer rating of 2.0.

Naturally, after a performance so poor that many were privately and publicly questioning his ability to continue playing at all, Dalton comes out against the Saints and looks as calm, cool, and collected as Brett Favre in a blue jeans commercial. On his first snap, Dalton spun out of a vicious pass rush and lackadaisically trotted 11 yards for a first down, then proceeded to convert three long third-downs on the drive, including a 12-yard touchdown pass (sorta) to Jermaine Gresham. Yes, Jermaine Gresham, notching the first touchdown by a Bengals tight end this season. It only took 11 weeks. Dalton finished the drive 4-for-6, and threw four more incompletions the rest of the game (16-for-22, 220 yards, and three touchdowns).

Dalton never faltered, his passes never fluttered, he converted five straight pass attempts on third down, and he led the Bengals to scores on five of their first six drives. There were times, more than a few, when Dalton looked “elite”—two scrambling bullets to Rex Burkhead for third-down conversions, and several passes to A.J. Green that only he could catch. The Bengals final scoring drive to put the game away at 27-10 was arguably Dalton’s finest of the season. He connected with Green for 32 yards on a crucial third-and-18 from the Bengals own 12-yard line, dropping the ball perfectly along the sideline between man coverage with a safety over the top. Three plays later, he did it again, finding Green on a 24-yard touchdown strike over the shoulder, between two defenders.

The most frustrating part of it all is that the only thing more certain to happen than Dalton’s anemic performance against the Browns was his inevitably impressive outing against the Saints. It’d be less frustrating if Dalton was just mediocre. That’d be cut and dry, and Bengals fans have dealt with mediocrity for decades. But he’s good enough to win—good enough to win playoff games and, maybe, a Super Bowl. Joe Flacco is a Super Bowl winning quarterback, for God’s sake. The Andy who played against the Saints could get it done. But the other Andy is the one who shows up in primetime games, and the one who has totaled one touchdown and six interceptions in three straight dreadful playoff losses.

It might not be too late for Dalton to exercise his big-game demons, but he’s running out of time before his growingly quiet supporters stop believing that the good outweighs the bad. It doesn’t help that his detractors, a group multiplying by each overthrown pass, have 100-million ($) more reasons to be angry after his questionably high-priced contract extension in the offseason. The Bengals have one more primetime game this season, a Monday Night Football matchup at home against PEYTON FU*#ING MANNING and the defending AFC Champion Denver Broncos on Dec. 22. It could be the difference between a Wild Card spot and an AFC North Championship. It could decide if the Bengals make the playoffs at all. The game will matter—Jon Gruden will be there, spazzing out about how much he loves Manning and Dalton and everyone else who’s ever thrown a football, there will be cameras everywhere, and the Enquirer and all the TV stations and probably myself and others on this site will talk about Dalton’s big game lapses for a full week leading up to the game. Even people that couldn’t care less about the Bengals or the Broncos will watch, because PEYTON FU*#ING MANNING will be there. Everyone will be watching, under the lights at 8:30 p.m., and it will be Dalton’s worst nightmare. For his sake, and the Bengals, Dalton has to find a way to be Good Andy that night.