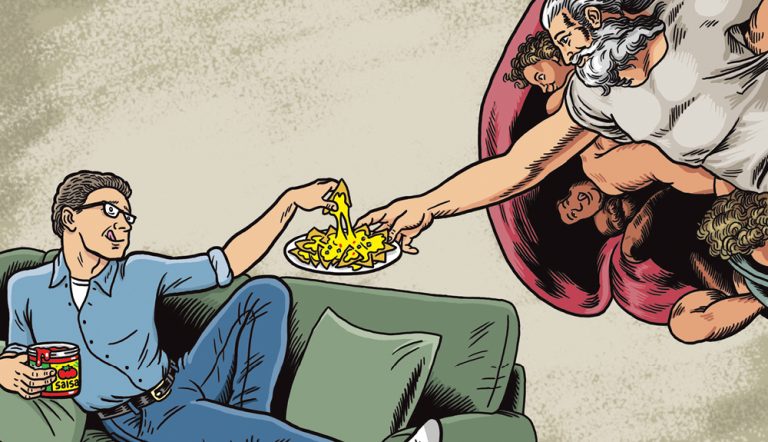 Let’s start with my death.

Me, wedged in a twisted, abstract metal sculpture that, mere moments earlier, was an on-the-cusp-of-recall GM Explodomobile, my broken, lacerated body leaking life faster than the EMTs racing toward the wreckage.

Me, in hospice, weak and waning, wasting away from a combination of old age, disease, and chronic, incorrigible coupon abuse.

Me, among others, splayed akimbo in a public space, our clothes spotted asymmetrically by crimson blossoms of entry and exit wounds, innocent victims of that particular day’s mass shooting in America, an incident which should in no way be blamed on the easy availability of guns, but rather, on me and my co-victims not carrying guns of deterrence.

Me, savagely mauled to shreds in my urban garden by a formerly exurban bear who, despite being an occasionally upright mammal born and raised in America, was denied his Second Amendment right to buy a gun by big government liberals and forced to kill like some effete European Union bear.

Honestly, the possibilities are endless, even if—spoiler alert!—life is not.

In each of these (or any other) projected demises, with my body writhing in agony, disengaged by shock, or afloat on a pillow of sublime Schedule II narcotics, and my final, fragile filament of vital force quivering on the threshold of rupture and a nonrefundable plunge into impenetrable darkness, it’s not entirely out of the question I might muster an urgent appeal. Something along the lines of “Please, God, don’t let me die” or “Oh, God, make the pain stop” or even “Dear Lord, I beseech you to smite that freakin’ bear.” I suspect such pre-expiration desperation requests are pretty common. I also suspect that after a lifetime of atheism, if there should be any omniauditory eavesdropping from on high, I won’t be afforded much consideration.

Unless, you know, that God-is-merciful stuff is true. And if true, only if it trumps the God-is-vengeful stuff.

Then again, who knows what (alleged) God’s ultimate tolerances and inclinations are? Maybe because of all the conflicting information (see preceding paragraph) and the global cornucopia of Higher Power brands available to imperfect wretches such as me (Amish to Zoroastrians, Mormons to Muslims, Hindus to Jews, Scientologists to Buddhists, cafeteria Catholics to actual Catholics, Pentecostal snake handlers to Flying Spaghetti Monsterites), faith isn’t the golden token that gets one through the coin-op pearly turnstiles. It’s conceivable the Incalculable Kahuna may give scale-tipping weight to other data, and in His or Her (oy, my cornucopia runneth over) wisdom, wave clean-living heathens into heaven just as routinely as it’s assumed S/He does dyed-in-the-wool, church-every-Sunday, reborn evangelical fundamentalist proselytizing tithers.

But forecasting the actions and reactions of (purported) God isn’t really what I’m shooting for here. How could it be? Even on my best day, I couldn’t possibly get inside the mind of an all-powerful, all-knowing Creator. It’s hard enough to truly know the mind of those we’ve actually met, grown close to, shared our lives with—partners, children, friends, Siri—and by comparison they are drooling morons. (No offense intended, my dear, dear idiots.) I mean, wouldn’t more (i.e., all possible) information on a particular (i.e., every single) subject hugely affect one’s thought processes and conclusions? Wouldn’t it alter—no, make that explode—the way one calculates life’s meaning and purpose? In short, can any of us ants even begin to guess what the guy holding the ant farm’s thinking?

I know, I know, ants aren’t created in the Ant Farmer’s image. OK then, let me refresh the analogy:

For 99.999999999 percent of the world’s population, the Big Bang, alternate dimensions, wormholes, the expansion of the universe, etc., are concepts we accept or reject based on who’s telling us, pre-existing personal beliefs, and/or the plasticity of our imagination. Contrast that with how a brainiac like Stephen “Dr. .000000001 Percent” Hawking sees the same things. For him, they’re deep, fully intelligible scientific theories. He conceives of, does, and understands the math (or in the parlance of scientists, “badass math”). The bases of his conclusions are hard data. Hawking’s grasp of quantum cosmology gives him a perspective on the space-time continuum that we cannot begin to appreciate.

Now imagine: (conjectured) God doesn’t just 100 percent understand those calculations and the whole of quantum mechanics and string theory and what lies beyond the edge of the observable universe and how gravity works and the intricacies, both physical and psychological, of the human brain and every chromosome in every strand of 7 billion different DNAs and all the facts in all the textbooks and all the computers in all the world, not to mention Rand Paul’s appeal. No, He invented them. The whole kit and caboodle. Thought it up, rolled it out, and set it to  humming without so much as a beta test. To call such genius genius is insulting, has no sense of scale, is the equivalent of equating a match to the sun. Toss additional personality shapers like immortality, infallibility, invisibility, and omnipresence into the mix and this is an entity I’d feel presumptuous claiming to “get,” much less interpret.

And no, a heavenly prospectus (i.e., a holy book or sacred text) doesn’t particularly help; it fails to fill in sufficient blanks to definitively divine the divine temperament. To further strain an already weary analogy, I could read A Brief History of Time every year for the rest of my life and maybe get smarter each time but I’ll never finish it Hawking smart. Not that it’s his fault. How can I reasonably expect a groundbreaking theoretical cosmologist to dumb things down enough to fit it in a single book digestible by the average Joe? (Reputed) God faces the same problem x infinity.

And then there’s the problem of determining which passages (theoretical) God feels strongly about and which ones are suggestions or just so much hot air from above. Who am I to say the 10 Commandments are non-negotiable but the prohibition on wearing cloth made of two different fabrics is optional? How do I know God’s command to observe the Festival of Unleavened Bread isn’t as important to Him as the Golden Rule? Just as thorny, if one is to leave that decision-making process to some individual or religious organization, how does one sort through the choice of choosers? Does one go with the homosexuality-is-an-abomination decider or the we’re-all-God’s-children decider?

To raise the “Seriously, what does God really take seriously?” stakes even further: Between a serial killer who contritely prays for forgiveness and a down-on-her-luck mother who steals a loaf of bread for her kids without a mea culpa, who’s waved into paradise with a complimentary ambrosia and Coke and who’s packed off to hell for eternal floggings with a rope of red hot razors? Similarly, does self-interest negate good behavior? Like, let’s say some guy, we’ll call him Mr. Johnson, is on the verge of cheating on his wife, but decides not to. Does his reason for nonadulterizing matter? Does stopping in order to spare his family potential pain gain Mr. Johnson swift entry into the heavenly after-party while reaching the same decision based on cold rationality (“If I get caught, I’ll lose everything in a divorce”) banish him to eternal life behind the rope line? Or does neither reason pass muster, due to their secular nature? Or perhaps both do because (ostensible) God is French and has a mistress himself?

Isn’t it possible—and by that I mean “In God all things are possible” possible—that an intellect so vast, so impossibly sophisticated and obscure, occasionally needs to unwind, and like some celestial NASCAR fan, only attends to us solely for the spectacle, the thrill as it were of the big-ass crashes? Because after all, to an everlasting Individual who has always existed and will always exist, who not only defines and directs time but created it, human existence, proportionately speaking, doesn’t even amount to an afternoon in the stands at Daytona.

Which presents me with yet another fork in the road to Damascus: free will versus determinism. In the projected Earth-as-Sprint-Cup-Series-highlight-reel scenario, humanity’s license to autonomously choose among many options (i.e., free will) is essential. Only through an assembly of unconstrained choices can our collective lives provide an all-knowing (rumored) God with a series of meta-random, mondo magnifico surprises. On the other hand, if we’re just going though the deterministic motions, then the when, where, how, and why of every fiery kiss of the grandstand wall and 20-car smash-up is a foregone, foreseen conclusion. Read: Predictable ergo no fun ergo why bother looking at all?

Seriously? Why bother looking? Great googly moogly, if S/He’s not even looking what’s the point of…

Hold on. I appear to be down the rabbit hole here. Let’s go back. To my death. To the rapidly eroding peaks of my EKG and the posited possibility of hedging my atheistic bet and floating a Hail Mary to Mary’s Immediate Supervisor. Which, should it come to pass, I’ll go on record right now as being not proud of. Because it seems only right and fair and coherent that I should go through death as I’ve gone through life: without faith.

Though not, I’ll quickly add then repeat and italicize for emphasis, not anti-faith. Major distinction. Huge.

To me, faith and people of faith are not silly or infuriating or even misguided. Not at all. In this rowdy world, I’m all for anyone whose faith in a Higher Power erases doubt and fear, and bestows comfort and happiness. I only want you to be you and to be happy. In fact, one of the main differences between my non-belief and the beliefs of many believers is my willingness to peacefully accept and coexist with all beliefs and believers—so long as they’re not oppressing, killing, terrorizing, warring, or proselytizing in the service of their belief. In other words, I’m not looking to be right, I’m just looking to be.

Notice I said differences, not selling points. This is not a recruitment drive. Nothing could ruin godlessness for me faster than a helter-skelter rush from piousness to paganism.

Damn. Sorry. I’ve wandered off again. If you’ll forgive me (and if you’ve read this far without rending the magazine into confetti, I like my chances), I need to loop back one more time to my deathbed/-car/-alley. Where I’m fading.

As already belabored, I can’t absolutely, positively rule out a last minute flinch or waffle, but I’m hoping not. Death seems a poor time to make major life decisions and philosophical revisions. So instead of renouncing my entire life, instead of spending my last few clock ticks in fear of what might be, I shall endeavor to inhabit the peace of the very few things I know for sure:

Now, I appreciate that this love and nachos ideology may not carry the day with (postulated) God. I further understand that my secular stab at being a decent, principled person—following the “Do unto others” prescription for humanistic rather than religious reasons, and obeying the seven Non-Deity Related Commandments because they align with my aversion to jail and inflicting hurt—is potentially damning. But love and nachos is what I’ve got. And if that makes me, in your or Anyone Else’s eyes, flawed or immoral or evil, well, hell.