Home Sports Football What the Bengals Should Do About Adam Jones 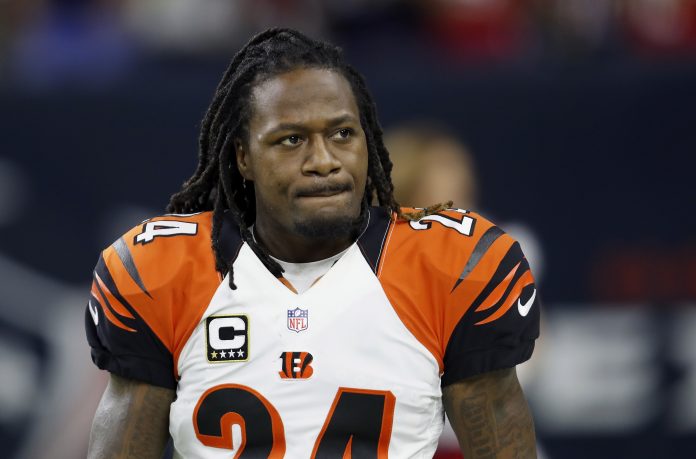 I won’t miss your rap sheet and role as co-conspirator in the Bengals playoff meltdown last January.

To be clear, the Bengals haven’t cut Jones—yet. But once the dust has settled from Jones’s latest off-the-field misdeed, the franchise should move on from their No. 1 cornerback. Sooner rather than later.

Following an incident at the Millennium Hotel in downtown Cincinnati early Tuesday morning, Jones was arrested and charged with four separate offenses, including a misdemeanor assault charge and a felony charge of harassment with a bodily substance. The incident marked the third time Jones has been arrested since he signed with the Bengals in May 2010, and the seventh arrest for the troubled defensive back since he entered the league in 2005.

When Jones was seemingly wandering the Island of Misfit Cornerbacks following the 2009 season, Marvin Lewis invited Jones to come to Cincinnati for a workout. Jones eventually earned himself a contract, and he later credited Lewis with not only saving his career—but also his life.

But given Jones’s latest and previous legal entanglements, his contract, his age, his recent performance on the field, and the Bengals depth at cornerback, the time has come for Cincinnati and the artist formerly known as ‘Pacman’ to separate.

In addition to his seven arrests, Jones has been charged in two other incidents over the last decade, including a Las Vegas stip club shooting in 2007 that left a man paralyzed. In January 2015, a judge upheld a $12-million settlement that Jones must pay to the victims of that shooting. Jones was also charged with disorderly conduct in a separate incident in 2013.

Even if the latest charges against Jones are dropped—and hey, there are two sides to every story, and during his court appearance on Wednesday, Jones was confident that his case would be dismissed—the possibility exists that Jones could face NFL suspension regardless of the case’s outcome, because of his prior brushes with the law. (Lewis is already on-record stating that the team will let the legal process play out.) Quite obviously, Jones isn’t much use to the Bengals if his off-field behavior prevents him from working on Sundays.

However, the three-year, $22 million ($6 million guaranteed) contract Jones inked with the Bengals last offseason does work in the team’s favor. According to Over the Cap, should the Bengals cut Jones before June 1, they would net just over $6.3 million in cap savings and face a cap hit of about $1.3 million. If Jones is released after June 1, the cap savings increase to $7 million and the cap hit decreases to $666,666. The Bengals can’t afford to wait until June to make a move on Jones, though.

Even if Jones is cleared of all charges before the new league year begins in early March, the Bengals should still cut him and use those savings to re-sign free agent Dre Kirkpatrick—and perhaps offensive lineman Andrew Whitworth and Kevin Zeitler—the team’s No. 2 corner over the past two seasons. Kirkpatrick, 27, resides in Cincinnati during the offseason and would reportedly prefer to stay with the Bengals, who could also use the franchise tag on Kirkpatrick. (Last season, the franchise tag—a one-year, binding contract for unrestricted free agents like Kirkpatrick—was $13.95 million for cornerbacks.)

On the field, Father Time appeared to finally catch up to Jones (who turns 34 in September) in 2016, as he ranked 45th out of 119 corners graded by Pro Football Focus. Still, the on-field impact of cutting Jones would (and should) certainly leave Lewis, defensive coordinator Paul Guenther, and the rest of the defensive staff feeling a bit queasy about its cornerback situation as the Bengals enter a crossroads season that is very much a playoffs-or-bust campaign.

Josh Shaw and Darqueze Dennard, the top backup corners, are unproven at best. The Bengals used their No. 1 pick in the 2016 draft to select University of Houston corner William Jackson III, who wound up missing all of the past season due to injury. And yet, the Bengals will never quite know just how good Shaw (24), Dennard (25), or Jackson III (24) are unless they receive consistent playing time.

Again, it won’t be easy for the Bengals to move on from Jones, who was one of the more vehement defenders of Lewis during the team’s disappointing 6-9-1 season.

“No way is it coach Lewis’s fault. Coach Lewis prepares us every week, and he does a great job leading the group,” Jones said after the Bengals Week 15 defeat to the Steelers. “ … Coach Lewis shouldn’t take the blame. A lot of people are giving coach Lewis hell, but it’s not his fault.”

Then again, with his third arrest since joining the Bengals and his freak-out in last season’s playoff loss, Jones has also shown an interesting way of repaying Lewis’ faith in him.

I hope Jones eventually finds peace, but it’s time for the Bengals to move on, trust their younger investments, and use Jones’s salary to fill other needs.