Home Culture TV Production in Cincinnati? Why Not? 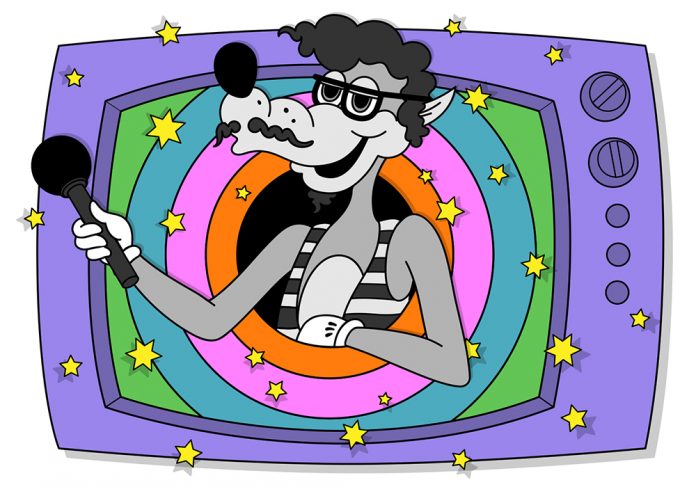 Cincinnati landmarks flash rapid fire across the screen—the Roebling Suspension Bridge, outdoor murals, Music Hall’s rose window—along with a dark-haired musician with glasses and facial hair. Through voiceover, he shares his philosophy about travel: He doesn’t want to see the Empire State Buildings and the Big Bens of the world.

I don’t want to see the whitewashed surface. I’m interested in the unique spirit of a city. I want to kick it with the real folks.

Then the man morphs into an animated wolf-person with a bindle and boards an animated train. I’m Yoni Wolf, he announces, and this is… A howl cuts off his voiceover, and a logo fills in the blanks: The Wandering Wolf.

If that sounds a little trippy, it is. The Cincinnati-centered pilot episode for a travelogue TV show, created by Wolf and Scott Fredette, has hints of Anthony Bourdain—only weirder. The late Bourdain was an influence, in fact, but they went for a bit more edge. “We’re on a different street over that’s a little bit grungier,” Fredette says.

So it’s trippy, yes, but also polished and engaging, showcasing talented Cincinnatians doing interesting things. Its creators aim to highlight emerging cultural scenes, especially in cities that aren’t exactly trendsetters. And if Fredette and Wolf get their way, they’ll turn The Wandering Wolf into a 13-episode, 30-minute TV show produced in Cincinnati. It’s just a matter of finding someone with the vision—and the money—to help them make it happen.

Original TV content coming out of Cincinnati? As Fredette’s forearm tattoo inquires, Can you imagine?

If you know Wolf’s music, much of which he’s created under the project name Why?, you know that “mainstream” has never been his thing. He started his musical journey, which earns him what he calls “a Northside living,” making experimental hip-hop music and adjusting from there. “He’s not Michael Bublé,” Fredette points out. “Surprise! I am Michael Bublé,” Wolf interjects.

Mainstream or not, Wolf’s music has been his ticket to see the world. He’s played shows to audiences as small as 20 and as large as 10,000 at festivals. Fredette, a freelance video director who does mostly branding and commercial projects, has also traveled extensively working for clients—from Mongolia to the Amazon. The two met in 2011, when Fredette worked on a documentary about Why? recording an album. He’s since produced seven music videos with Wolf.

Beyond having music industry work in common—Fredette’s credits include tour visuals for big-name artists like Kanye West, Katy Perry, Jay-Z, and Kenny Chesney—the friends also share a travel philosophy. That it’s better to bypass the tourist standbys and instead explore a city’s underbelly, seeking out the up-and-comers in its arts, music, and food scenes.

When they decided to create a visual travelogue based on that philosophy, they already had The Wandering Wolf name. Wolf started a podcast under the name in 2013 as “an extroverted outlet for an introverted guy.” He’s now recorded more than 130 episodes, interviewing guests from family members to internationally known musicians such as Lorde. Topics of conversation vary, but he pushes beyond shallow talk about the guest’s career to crack into “the deeper stuff they’re thinking about.”

That’s a primary goal for the TV show as well. Initially they planned to film the pilot episode on location somewhere, maybe Mexico City or Toronto. But when People’s Liberty awarded Fredette a $10,000 grant to hone the concept, it made sense to shoot the pilot and find their style here in their hometown. Perhaps that was fortuitous, considering how Cincinnati culture has grown and diversified.

I feel like it’s pretty rich compared to other Midwest cities. There’s a lot going on in the arts here.

Wolf isn’t the only one who thinks so. After naming Cincinnati No. 8 on its “52 places to go in 2018” list, The New York Times followed up in June with a story declaring “The Arts Are Flourishing in Cincinnati.” Fredette and Wolf, however, wanted to look beyond the places and people that feed those types of headlines. “Our idea is to highlight the stuff that happens in every city that doesn’t escape the city,” Wolf says.

The Wandering Wolf pilot focuses on four facets of Cincinnati culture: music, art, food, and community. During the music segment, Wolf reflects on how the scene in Cincinnati has changed throughout his own music career. “A lot of great music is happening here now,” he narrates. That “now” is significant for Wolf. Part of the reason he moved to the Bay Area (Oakland and Berkeley) from 2001 to 2010 was because he felt Cincinnati’s music scene, especially in the rap and hip-hop realms, was too conservative. “I don’t think that’s really the case anymore,” he says. He interviews musicians you’ve probably heard of, like Chuck Cleaver of Wussy, and some you haven’t, like poet/musician Siri Imani, who characterizes her style as “a more interactive way of doing poetry.”

People in costumes made from plastic bags dance around Wolf at one point—the show is trippy, remember?—as the focus transitions from music to art. Wolf interviews Terence Hammonds about his print-based sculptures, and Visionaries + Voices cofounder Antonio Adams about his artwork getting noticed outside of Cincinnati. In the food segment, chef Shoshannah Anderson of The Littlefield talks about roasting chicken for her family at age 7, while Boca Group lead chef David Falk discusses the importance of simplicity in creating great dishes.

The community segment turns to problems interviewees see in Cincinnati: segregation, poverty, food deserts. Fredette says he thought about cutting the segment from the final pilot due to length, but that option felt wrong, especially when some of the art featured in the show comments on those very issues. Still, the episode leaves things on a positive note.

Through the process of making this show, I’ve made many new human connections. I’ve got a lot of new, budding friendships. And that alone, despite some of the pessimistic conversations I’ve had, makes me hopeful.

What about hope for The Wandering Wolf? Fredette and Wolf have shown the pilot episode to a few people in Los Angeles and garnered initial interest from an executive producer there, but nothing concrete. Ideally, they’d love to see it find a home with an outlet like Viceland.

And they’d really love to see it produced in Cincinnati. After all, the city has the talent—Fredette estimates there are hundreds of skilled professionals in the local video production and creative communities who could work on this type of project. For the pilot, they used a local designer, animator, musicians, and editors.

The pilot got a great response at its first public showing in November 2017, according to Aurore Fournier, program director for People’s Liberty. “The best feedback was that it inspired them and made them think about their town a little bit differently,” Fredette remembers.

He is dismayed a bit about a lack of opportunity or push for creating original programming here—besides the People’s Liberty grant, Fredette provided the remaining funds for the pilot himself, along with professionals donating their time or agreeing to “massively reduced rates.” With so many new digital and broadcast outlets for content, though, he figures it’s time to think beyond the status quo. “I do get the sense that people need to broaden their perspective about the possibility of doing something great here,” he says. “We could be starting something incredible in Cincinnati. The opportunity is there.”

Perhaps getting The Wandering Wolf made here would give Cincinnati some momentum in that area. “I hope it would create opportunities for more local creative talent to collaborate,” says Fournier. Because while there’s not a market here now, Fredette likes to imagine that there could be. “You don’t need to be on the coast to do this,” he says. “We’ve proven that.”