Home Culture Arts This Local Artist Has an Impressive Social Media Following, and Rightfully So

Leigh Ellexson’s artistic career has been anything but conventional, and that’s why she loves it. With almost 90,000 Instagram followers and more than 100,000 YouTube subscribers, she’s made a name for herself in the art community, all from the comfort of her home in Cincinnati. Although she’s been an “artist since forever,” Ellexson started profiting from her art on Etsy in 2016. She was attending art school in Maryland at the time and sold commissioned watercolor portraits. Three years ago, Ellexson moved back to the Queen City to make a living selling her art. Over the next year, she constantly uploaded pictures of her drawings on Instagram, and her followers skyrocketed. Soon enough, her followers began requesting prints of her art, so she took down her Etsy page and launched her own website to sell her work.

Ellexson’s art is “colorful, carefree, cute, and just nice to look at.” Ultimately, she aims to radiate positivity through her art and her YouTube videos, which typically depict fast-motion painting demonstrations and art supplies reviews. Ellexson also frequently films studio vlogs that give viewers a behind-the-scenes look at her life as a full-time freelance artist. “I’m not trying to make serious art,” she says. Whether it’s an enamel pin portraying a dog and its grapefruit friend hanging out beneath a rainbow, or a vinyl streetscape sticker, all of Ellexson’s work is inspired by personal experiences. “Mostly the places I travel—I take a lot of color inspiration from there,” she says. “[I also draw inspiration from] things I see on a daily basis.” Toadie, Ellexson’s charming French Bulldog, and Hercules, her baby blue parrotlet, make frequent appearances in her art.

Fans can purchase Ellexon’s artwork at Lola’s downtown and Covington’s Handzy Shop + Studio. When Handzy first reached out to Ellexson to feature her as a “Maker of the Month” more than a year ago, she says she never would have guessed how their partnership would grow. “As they expanded their business, they would reach out to me for advice and we’d trade resources,” Ellexson says. “Then they expanded their shop to include clothes, so I started modeling for them. It’s been a good partnership.”

As she approaches her fourth year in business, Ellexson continues to strengthen her brand and social media presence, no matter the obstacles she faces. “I always say to just keep making stuff,” she says. “If you feel like you have art block, force yourself to make stuff. Eventually, it will be good.” Ellexson’s art is proof. 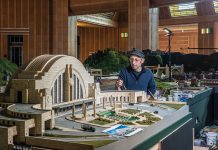