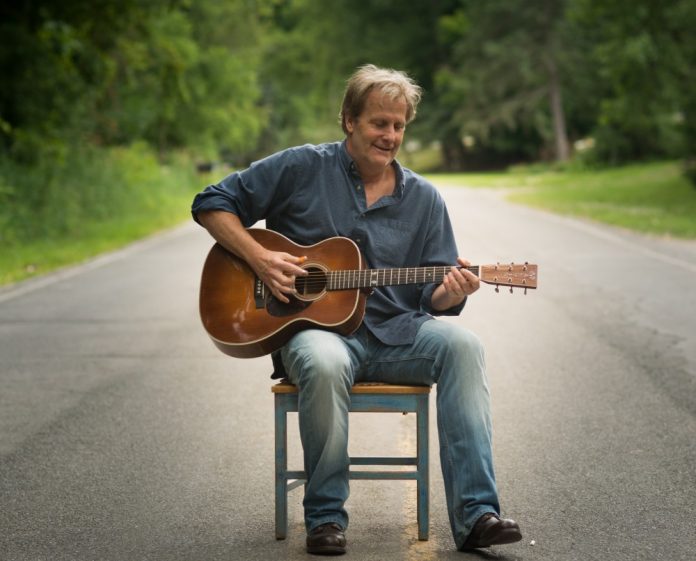 Actor Jeff Daniels (HBO’s The Newsroom, assorted Dumb and Dumbers, The Squid and the Whale) is an admired, just-below-the-radar-by-choice actor’s actor. But when he sings, he unabashedly becomes the center of attention. Daniels will be playing his songs at the 20th Century Theater May 21, with The Ben Daniels Band.

What songwriters have you learned from?
I love Lyle Lovett, Steve Goodman, Cheryl Wheeler, Keb Mo, John Prine. Suzanne Werner, I like her a lot. And then the young people: Noah Gunderson, Sturgill Simpson, Jason Isbell, John Fullbright.

When you are making a movie, do you break out a guitar?
Oh yeah –the guitar is in the trailer and it’s always been there. Movies are a bit like the army, ‘hurry up and wait,’ and there’s a lot of wait. Hurry up wait and then be brilliant. Creatively it keeps you alert, keeps you alive. You are always working on the next song or really woodshedding the guitar. I’ve worked on my guitar playing a lot in movie trailers.

What guitar do you play?
I play a Martin—there’s an OM Jeff Daniels custom edition Martin based on 1934 C-2 arch top. I can die and go to heaven now. There’s a list with Jon Meyer, Clapton, Stills, Stefan Grossman. And there’s my name.

How did you start playing?
It was 1976 and I was about to move to New York to try acting. I was interested in music, and I couldn’t take a piano with me. I bought a guitar because I had an idea that I’d be sitting in my apartment a lot waiting for the phone to ring.

But acting also really shaped me as a songwriter. I started at the Circle Repertory Theater, and being around those amazing playwrights—like Lanford Wilson, Albert Innaurato, Milan Stitt—I was watching their writing process, standing in the middle of it. I knew I could go back to my apartment and learn how to write on guitar based on what I learned from watching those playwrights writing.

At the 20th Century Theater you’ll be backed by your son’s group, The Ben Daniels Band. What’s that feel like?
It’s been a thrill to see what they do with my songs—a lot of the songs I do need a band. Originally I thought, ‘let’s get some old guys, a Viagra band,’ but then I though wait, I’ve got a band here. And it really works. It’s been really gratifying. And I didn’t know that a year ago.