It’s an odd time for the Cincinnati Reds. They simply have more problems than a team is generally prepared to deal with after just one month. Homer Bailey is out for the season, All-Star catcher Devin Mesoraco can’t squat to catch, Brandon Phillips and Zack Cozart have picked up small injuries in the past few days, Billy Hamilton’s average is dipping ever closer to the Mendoza line, and Jay Bruce…well, yeah. Despite all of that, and the perpetual early-season panic of most Cincinnati fans, the Reds are just one game below .500 at 16-17.

While there aren’t exactly many reasons for optimism, the sky hasn’t fallen just yet in Cincinnati. For that reason, and because I don’t want to write about something negative for a third post in a row, it’s time to take a brief moment to recognize the man everyone knew would be leading the Reds in batting average and OBP through the first 33 games of the season. That’s right, Reds perennial All-Star and biggest slugger, Brayan Pena.

Pena (catcher, first baseman, Director of Clubhouse Morale) went 3-for-4 Tuesday night, including a single that set things in motion for Devin Mesoraco’s walk-off double. (The Reds beat the Atlanta Braves 4-3 to avoid a fourth consecutive loss.) It was Pena’s fourth multi-hit game in a row, raising his average to .356, and his OBP to .429. In related news, his average amount of time spent smiling during TV close-ups remains near his MLB-record career average of .999.

Writers are not allowed to have favorites, but I can say with complete confidence that Pena is as far from being my least favorite as possible. Without precisely revealing what I did for a living during the 2014 baseball season, I’ll say that I had to watch every single pitch of every single Cincinnati game, without ever turning away, not even to pause the DVR and take a break from the, at most times, very painful play of the Reds last season. But, on several occasions last season, Pena, be it with his unorthodox/not-always-so-athletic defensive play at first in place of Joey Votto, or by sheer virtue of being the only player on the field who wasn’t radiating misery, made things a little more watchable. And, for what it’s worth, off the field he’s what old men in press boxes across the country would call, through cigarette-burdened voices, “One of the good ones.” For God’s sake, just look at his Twitter bio. 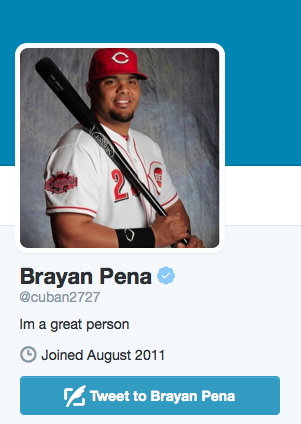 If Brayan Pena worked in your office, he and his wife would absolutely host all work-related barbecues—the ones you actually want to go to, not the ones that you attend to keep up appearances, despite the fact that you know they’ll be understocked on beer, tortilla chips, and general fun.

All of that aside, Pena has exceeded all that was expected of him as a Reds player over the past two seasons, considering he was brought in predominantly to communicate with Johnny Cueto and fellow Cuban Aroldis Chapman in addition to backing up Devin Mesoraco. But as a result of injuries to Votto and Mesoraco, Pena has played in 138 of the 195 games the Reds have played since he joined the organization, including catching Cueto for the majority of his 20 win season in 2014. Perhaps more impressive though, was that Pena committed just one error in 53 game (45 starts) at first base in 2014, having played the position just four times in his previous eight seasons. It’s very much overlooked that Pena’s ability to hold down first in Votto’s absence allowed Todd Frazier to stay at his natural third base position during his breakout season last year. Pena, who also batted .368 in 21 plate appearances as a pinch hitter last year, was quietly an unsung hero for the Reds in 2014, finishing the season at a playable .253 after seeing by far the most plate appearances of his career.

I have one lasting take away from Pena in 2014, and it came neither at the plate nor in the field of play. In June, during a homestand against the Cubs, both benches cleared an inning after Chapman inadvertently through wild and high to Nate Schierholtz on back-to-back pitches. Chapman waved at the Cubs dugout, Anthony Rizzo caused a scene at first, and the rest is history. But as the Reds funneled out of the dugout, Pena exited the northern steps, and headed promptly to the southern exit where he grabbed Chapman and forced him away from the brawl and back down the stairs. Being a calming influence on Chapman is just as much Pena’s job as catching him at the plate.

Fast forward to 2015, and Pena is stepping in to fill voids for the Reds once again. With Mesoraco’s bat again out of the lineup, and Jay Bruce’s struggles growing darker, Pena’s surprising presence at the plate is once again helping to steady the ship. A switch hitter, Pena has been especially impressive from the left side of the plate, batting .404, including an even .400 average against right-handed starters. Pena’s BB/K ratio is also at a career best 1.125. Defensively, where Pena’s ability to call games has been questioned in the past, he is managing the fourth best rotation in the league and maintaining a Catcher’s ERA of 4.25, despite having to deal with one of the worst bullpens in all of baseball for the second year in a row.

The Reds handling of the Devin Mesoraco situation has been disastrous, but Pena’s play is helping to weather the storm. For all the fan complaints that certain Reds players haven’t been “doing their jobs” thus far this season, Pena is once again doing far more than his.