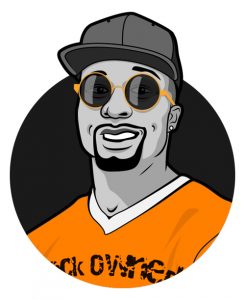 Means Cameron is a force: owner of the BlackOwned brand, designer, hip-hop artist…and now, coffee shop owner. We sat down with Cameron to talk Black Coffee Lounge and his new album, Espresso, both coming out this month.

When did the idea for Black Coffee come about? About four years ago, before we opened the [BlackOwned] shop. I realized coffee really was a medium to bring people together. And coffee originated in Africa, in Ethiopia. The name happened after BlackOwned. And we plan on serving a really good cup of black coffee.

You announced the shop earlier than planned, after the incident in the Philly Starbucks. There’s the question of who spaces belong to—the cues about who’s welcome. African-Americans are typically forced to be on the defense, more so than being able to create offense. If you look back 60 years, there were places we couldn’t go. So we had to create our own spaces, or we had to eat in the basement. Even though there are laws that have lifted that, the energy is still there. We realize the power we have, and we want a space that brings everyone together.

“Defense” makes a lot of sense. They run a play, and then we have to [respond]. I remember when we first started BlackOwned and had everybody in an uproar. People who didn’t know how to accept it—after years of being able to engage with me—they see that I’m not out here trying to fight people. I’m fighting for what I feel is right.

You’re allowed to assert yourself, to take up space. Exactly. In the past that’s been an issue—you can’t do this, you can’t say this. Well yeah, we can. The music we’ll play, the art and shows we’ll have, it will be a different vibe. You could be looking at a painting of Biggie Smalls but listening to Frank Sinatra. More overlap of cultures, a place where young creatives come and build Cincinnati.

You’re dropping an album, too. It’s called Espresso because espresso and music should do the same thing: boost your spirit and bring you up.

What’s your vision for Black Coffee? On a global scale, there is no minority- or black-owned large coffee chain, so I think there’s an opportunity there. People get intimidated by these ideas, but someone’s got to do it.