Last week, the production company behind HBO’s brilliant When It Was a Game baseball documentary series posted a “home movie” clip from a Reds game at Wrigley Field in 1940. It’s a beautiful minute-long look at one of the best Cincinnati teams ever, the color footage showing players warming up on the field and goofing off in the dugout.

The clip also brought a reminder of the single most somber moment in Reds history, the details of which aren’t familiar to most current-day Reds fans. With the 2022 team just playing out the string on another difficult season, now seems like a good time for us to take a moment to recall Willard Hershberger.

Hershberger had been a three-sport star at Fullerton Union High School in California. After graduation, he signed with the New York Yankees as a catcher, not long after his teammate Arky Vaughan signed with the Pittsburgh Pirates; Vaughan would go on to a Hall of Fame career. Hershberger hit well at nearly every stop in his journey up the minor league ladder (.357 in El Paso, .339 in Erie, .310 in Newark), but with future Hall of Famer Bill Dickey firmly entrenched behind the plate in New York, Hershberger’s future seemed to be elsewhere.

He got his chance in 1937 when he was traded to the Reds in exchange for shortstop Eddie Miller. (Five years later, Miller was traded back to Cincinnati and would be selected to four All-Star teams while wearing a Reds uniform.) After a fine performance in the spring of 1938, “Hershey” won a spot on the big league roster. Of course, he was slated to be the backup to another future Hall of Fame catcher, Ernie Lombardi, but that seemed to be just fine with him.

The Sporting News noted that Hershberger “was good humored and highly popular with his fellow players.” Over his first two seasons, he hit .319/.358/.384 as part of an effective catching duo; Lombardi’s nickname was “Big Slug,” and teammates took to calling Hershberger “Little Slug.” TSN called them the “ideal catching combination.” Early in the 1940 season, local radio personality Ruth Lyons took a poll among female fans to determine the “Most Popular Red.” Lombardi and Hershberger finished first and second in the voting.

His teammates also appreciated what Hershberger brought to the team, even if it seemed like he didn’t. Gene Thompson, a 23-year-old right-hander who won 16 games for the 1940 club, spoke for his fellow pitchers about their admiration of Cincinnati’s backup catcher. “No doubt in my mind he could have been a starter for most anybody,” Thompson said. “I don’t think Hershey realized he was near as good as he was. We pitchers just thought he was outstanding. … Most guys with Hershey’s ability would say, ‘Trade me. I want to go to a place where I can catch every day.’ He had no confidence. He was satisfied (to be Lombardi’s backup.)”

Hershberger cemented his spot on the 1940 team, which had high expectations. The season before, the Reds had returned to the World Series for the first time in two decades. Though they were swept by the Yankees, everyone expected good things in the upcoming season. Cincinnati didn’t disappoint out of the gate, winning 17 of their first 22 games. As August approached, the Reds built a nine-game lead over Brooklyn in the National League standings and appeared to be running away with the pennant.

Late in the month, however, the Reds began to stumble just as Hershberger was forced into the lineup on a more consistent basis. Lombardi had made his fifth consecutive All-Star team, but during the first couple of weeks of July he split the middle finger on his throwing hand and then sprained his ankle. On July 27, the Reds lost to the cellar-dwelling Phillies and Hershberger went 0 for 4. The Reds lost the next two (with Hershberger going 0 for 4 in each loss) but rebounded to defeat the Giants on July 30. Hershey went 3 for 4 in that game. 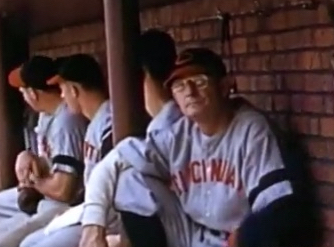 On July 31, the Reds blew a 4-1 lead when pitcher Bucky Walters, the reigning NL Most Valuable Player, gave up two walks and two two-run home runs in the bottom of the ninth, handing the Giants a walkoff win. In the aftermath, Hershberger was inconsolable. On the train to Boston that evening, he blamed himself for the loss, telling teammate Billy Werber, “I called for the wrong pitches. If (Lombardi) had been in there, we wouldn’t have lost. I’ve let the team down.”

His teammates had always joked about what they saw as Hershberger’s hypochondria and his insomnia, and while he’d always been seen as “moody” they noticed that Hershberger had become more irritable in recent weeks. He lost 15 pounds and suggested to a couple of teammates that he might kill himself. One of those teammates, third baseman Lew Riggs, was Hershberger’s roommate in Cincinnati. Later, Riggs would talk about occasionally seeing Hershberger staring out the window in the middle of the night. It was clear that their teammate was troubled, but they didn’t understand the depths of his despair.

The Reds had a double-header against the Boston Braves on August 2. Hershberger caught the second game and went 0 for 5 at the plate. In the sixth inning, according to Cincinnati sportswriter Lee Allen, Hershberger made no attempt to field a bunt that was only 15 feet or so from home plate. Cincinnati manager Bill McKechnie, himself a future Hall of Famer, emerged from the dugout and asked his catcher if something was wrong. “You bet there is,” Hershberger said. “I’ll tell you about it after the game.”

After the Reds were swept in the doubleheader, their lead in the standings now just six games, Hershberger sat with McKechnie and coach Hank Gowdy in the empty stands at Braves Field. He continued to blame himself for the team’s woes. The coaches tried to console him, to little effect.

Later, back at the Copley-Plaza Hotel, McKechnie brought Hershberger to his room, where the catcher lay on a couch and emotions overtook him. A week later, McKechnie described the scene to a reporter from Hershberger’s home state of California. “He cried like a kid,” McKechnie recalled. “Seemed he cried an hour, and then he told me he was worried about the club losing games he had caught. The poor kid. He was worked up particularly about that game in New York Wednesday night in the ninth inning. He said he thought he had called the wrong pitches. I told him everything was OK, and he seemed all right.”

After some time, Hershberger told his manager that the talk had eased his mind and they went out to dinner afterward. The next morning, Hershberger had breakfast with an Enquirer beat writer and later spoke to a number of teammates in the hotel lobby. By all accounts, he seemed to be back to normal.

When he didn’t show up for batting practice, however, McKechnie was alarmed. He asked Cincinnati’s traveling secretary to call and check on the catcher. Hershberger answered the phone and reported that he was ill and couldn’t play but promised to come to the park. He didn’t show up, though, so McKechnie dispatched Dan Cohen, a Cincinnati business owner who was traveling with the team, to the hotel to bring Hershberger to the park. “Tell him we won the first game and that he won’t even have to get into uniform, but to come out.”

McKechnie then went into the Reds’ dressing room to speak with his team before the second game of the doubleheader. “You know that Willard Hershberger has not come to the park so far today,” the manager said. “We have an unusually sick man among us who must be treated differently than we are in the habit of treating one another. We must cease playing jokes on him, and above all we must cease asking him how he feels. He is so sick mentally that we must overlook anything he does and try to raise his spirits back to normal.”

What McKechnie didn’t know was that his words were too late. When Cohen got to the hotel, he discovered that Hershberger’s door was locked. A maid helped him gain entry, upon which he discovered that the 30-year-old had taken his own life.

In the weeks following the tragedy, most of the coverage attributed Hershberger’s suicide to his despair over his (and the team’s) poor play. As is often the case, that explanation is far too simplistic. During that tearful conversation in his manager’s hotel room, Hershberger told McKechnie about an incident that he rarely mentioned to anyone.

In 1928, Hershberger was a popular high school senior, class vice-president, and captain of the baseball and basketball teams. One day in November, he went hunting and, when he returned, left his shotgun in the hallway of his family’s Orange County home. In the middle of the night, he heard a blast and Willard discovered his father’s lifeless body.

Hershberger’s father was deeply in debt and having troubles at work, but the young man blamed himself for leaving his shotgun in the hallway. He vowed to support his mother forever, pledging never to marry as long as his mother was alive. “Something snapped,” a high school teacher recalled. “It didn’t go away. It ate into him.”

No, it never went away, and Hershberger’s suicide on August 3, 1940, clearly was not just about a handful of disappointing performances in baseball games. It was the final act in what must have been a dozen unbearable years for a talented, troubled young man.

In the wake of the tragedy, Hershberger’s teammates dedicated the rest of the season to him. The Reds retired his uniform No. 5 temporarily—it would be permanently retired in 1984 after Johnny Bench wore it for 17 seasons—and wore the black armbands that are visible on uniforms in the home movie clip I mentioned above. The players vowed to win the World Series in Hershey’s honor.

They did just that, defeating the Detroit Tigers in seven games for Cincinnati’s first championship since 1919. When the Reds gathered to vote on which players would receive a share of the World Series revenue, they voted for Hershberger to receive a full share. Soon thereafter, a check for $5,083.62 was dispatched to his mother in California.