Home News Thank You for Being a Friend

On a wall in Bea Lampkin’s home hangs a 1981 painting titled Teardrop. It’s an acrylic, made by a young man she first met in 1965, when he was 3 years old and battling Acute Lymphoblastic Leukemia (ALL). Back then, notes Lampkin, a pediatric specialist who served as director of hematology at Cincinnati’s Children’s Hospital Medical Center (CCHMC) for nearly 20 years, “[the] prognosis of ALL was dismal and surviving the disease over about a year was not common.” 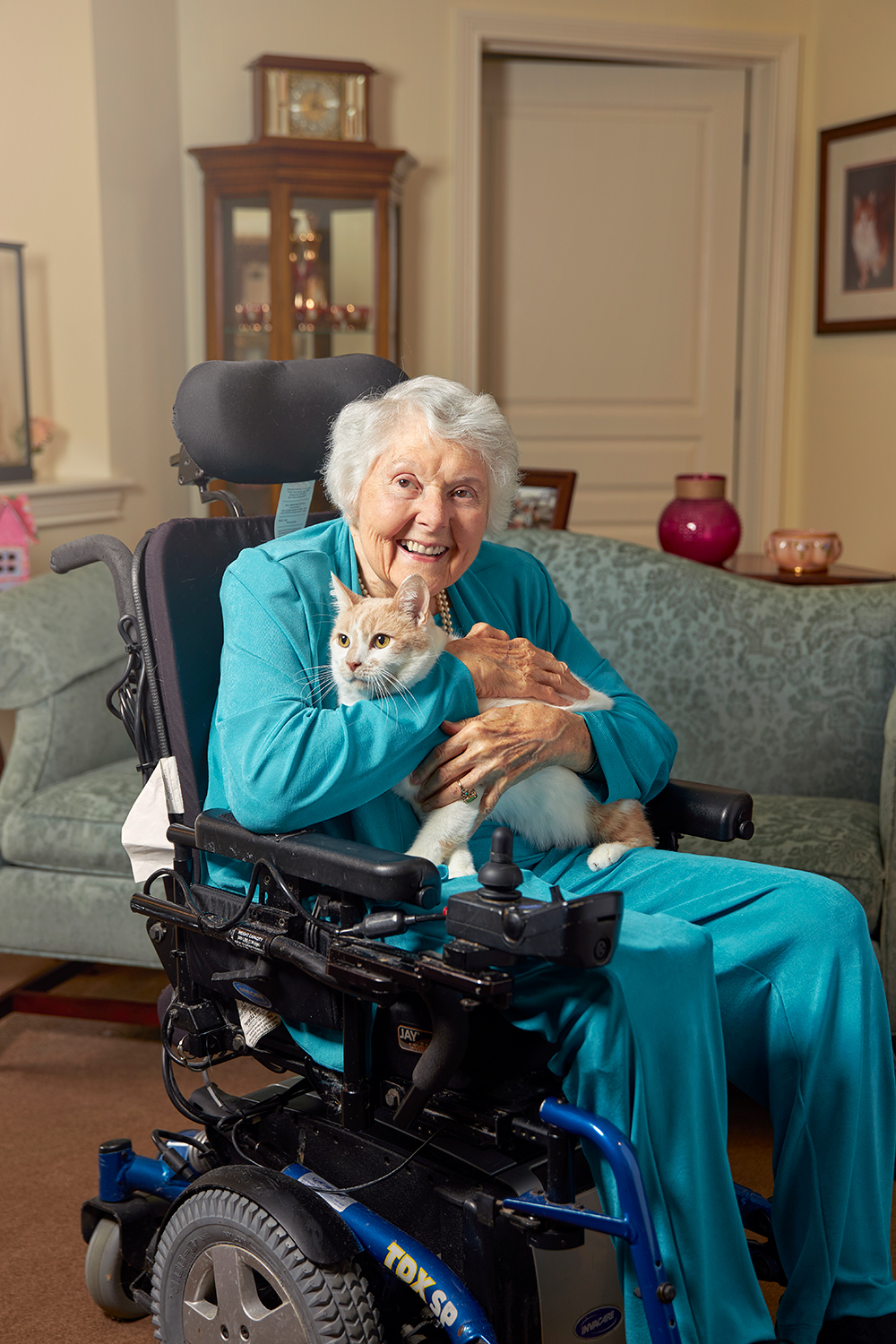 Still, this young man—a “hero” in Lampkin’s eyes for all he ultimately endured—defied the odds, responding well to the then-limited treatment available. While other pediatric patients rarely went into one long-term remission, Lampkin treated this young man through four remissions and a bone marrow transplant—time that allowed him to play basketball, graduate from high school, and earn a college degree.

When he couldn’t find a job because of his medical history, Lampkin hired him in her department. When she learned in 1990 that he was an artist, Lampkin helped arrange a one-man show at CCHMC for 42 of his paintings. And when she’d finally exhausted all means of fighting the cancer that would ultimately claim his life, she arranged for him to spend a week at the beach because he’d always wanted to see the ocean.

“I never will forget his reaching up and hugging me for being his doctor when he was just 3 years of age,” she says today in a gracious, deep-south drawl. “He was an inspiration to me and all who knew him.”

Inspiration is something Lampkin—an Alabama native who’s spent eight decades dealing with the challenging after-effects of her own childhood battle with polio— knows a little something about. In fact, the overwhelming message of her life’s journey, she notes today in perhaps the understatement of a lifetime, is simple: “It shows what you can do when you put your mind to it.”

Turns out, Lampkin put her mind to quite a lot. While treating pediatric patients with life-threatening illnesses and disorders, she was also working diligently to research one of the most vexing pediatric cancers of her time—Acute Myeloid Leukemia (AML). But where other doctors “thought there was no way forward,” noted Children’s Director of Oncology John Perentesis at a 2013 awards ceremony, Lampkin was a “trailblazer” who wouldn’t take no for an answer. Looking back, it’s no exaggeration to say that Lampkin’s work with AML, fueled largely by her innate persistence in the face of life’s many oppositions, altered the course of pediatric cancer treatment nationwide.

She’d gently decline full credit, but it’s clear from her dedication to this patient and so many hundreds of others that Bea Lampkin is an unstoppable force.

Born in 1934, Lampkin was the middle of five children and a Depression-era baby who grew up in Tuscaloosa, Alabama. Her early days consisted largely of walking to and from school, running barefoot through neighboring farms, and exploring a nearby forest and lake with siblings. Her mother, a University of Alabama (UA)-trained musician and eventual elementary school teacher, fed itinerant homeless men on the family’s back porch and formed a “rhythm band” for the neighborhood kids. Her father, who had to drop out of UA law school to feed the family, worked for 50 years as the Tuscaloosa postmaster and built the family home by hand, on land that also housed farm animals and a vegetable garden.

But Lampkin’s life changed forever when she contracted polio in 1941 and became paralyzed from the neck down. At first, she says, “I was sent away to a hospital in another city but did not thrive emotionally or physically,” so she came home and went back to school in a wheelchair. Slowly, she regained the use of her arms and most of one leg, but the physical and emotional journey took years and the painful struggle was profound. Many surgeries and custom braces later, she was able to walk independently with crutches; eventually, she became the March of Dimes poster child.

Still, life after polio was hardly easy. Her sister carried her schoolbooks. When friends were playing on the playground, Lampkin was relegated to eating alone in a classroom. When other kids ran to school, she struggled to keep up. But by the time she entered high school, Lampkin was playing football with the neighborhood kids (as quarterback only—no tackle), swimming regularly, and riding a bike using a special pedal her dad had made to accommodate her leg brace. “I wanted to be looked upon just like any other kid,” says Lampkin. That theme would echo throughout her life.

In college at UA, she lived in a dorm, studied pre-med, and played clarinet at football games with the University’s Million Dollar Marching Band. Money was tight, so she helped pay her tuition by working as a telephone operator, a clerical assistant, and a lab assistant in embryology and parasitology.

After graduation, she applied only to the Medical College of Alabama in Birmingham (“I thought if they didn’t accept me, no other medical school in the United States would, since I walked with Canadian canes and a brace on my right leg,” she says). When she was accepted on a full tuition scholarship, her father jerry-rigged a car so she could drive there on her own (albeit with her left foot and a hand brake).

The summer after her first year, she worked at a National Cancer Institute lab in Bethesda, Maryland—an experience that “piqued my interest in doing research,” says Lampkin. Later, she paid her own room and board by working as an extern at the Medical College’s teaching hospital. She’d go on to graduate second in her class, be certified as a medical doctor in 1960, and intern at the Medical College of Virginia, where she settled on pediatrics because she found her first interest, surgery, too physically demanding and because she liked the challenge of diagnosing and treating pediatric and adolescent diseases.

In 1961, she was accepted “sight unseen” for a residency at Cincinnati Children’s Hospital after multiple recommendations from professors. “I did not go for an interview because I feared I would not be accepted if they saw me walking on crutches,” she says. She soon became interested in children’s blood diseases and began a two-year pediatric hematology fellowship in Los Angeles after her residency.

An opportunity to study leukemia and pediatric chemotherapy treatment brought her back to Cincinnati in 1965 to work as a research fellow. Back then, writes Lampkin in a draft of her memoir, “a few children with leukemia were diagnosed and treated but chemotherapy was in its infancy. This disease was fatal in almost all cases and little could be done other than giving fluids, blood transfusions, and antibiotics. Only a few patients could be induced into a remission.” She set out to change all that.

After a series of promotions and extensive work in research, patient care, and teaching opportunities (she regularly taught at both CCHMC and the University of Cincinnati), Lampkin arranged a second fellowship in Australia on bone marrow stem cells and leukemia. “My plans abruptly, completely changed in 1973,” she says, when both of her superiors left CCHMC and she was offered the position of Director of Hematology—the only pediatric hematologist in a 75-mile radius.

During Lampkin’s tenure, the CCHMC hematology division grew substantially, most notably to include oncology. In 1981, Lampkin, still both a practitioner and avid researcher, was named the first leader and chair of the AML Strategy Group, a division of a national organization dedicated to studying pediatric cancer. She was also instrumental in starting up a bone marrow transplant program at CCHMC—a then-groundbreaking procedure that offered “some children a better chance for survivorship,” says Lampkin. As a result, “We not infrequently were referred children with AML from other pediatric institutions for treatment,” she says; even so, “very few of these patients became long-term survivors.”

The loss only made her work harder. After conducting countless studies involving chemotherapy drugs and delivery methods, she and her team finally made headway after realizing “very intensive therapy over a short period of time” was just as good as the then-standard of care (less intensive therapy delivered over the course of two or three years). Ultimately, “Lampkin developed one of the most effective treatment regimens for acute myeloid leukemia, an aggressive form of the disease,” Perentesis is credited as saying in a 2013 Business Courier article. “The core of it is still used today.”

Soon, peers began taking notice of what was happening at CCHMC. “As a result of our leadership in the field of AML,” says Lampkin, “our division became recognized nationally and internationally as a leader in the United States in the diagnosis and treatment of children with AML.” More importantly, pediatric cancer patients’ remission rates began to drastically improve.

“When she started,” notes a 2013 Business Courier piece on Lampkin, “only about 30 percent of children with cancer were being cured. By the time she retired, as many as 80 percent were able to become cancer-free, with even higher rates—85 to 90 percent—for leukemia.” In addition, notes Lampkin, “the Oncology Division had been designated as the Number One Pediatric Oncology Program by U.S. News and World Report [and the CCHMC] Bone Marrow Transplant Center had become perhaps the largest for children and adolescents and one of the best in the United States.”

Lampkin continued her groundbreaking work and research until 1991, when she chose to step down as Director of Hematology, “principally because of developing post-polio syndrome,” she says—a progressive muscle weakening that happens to between 25 and 40 percent of survivors and that eventually required her to use a wheelchair nearly full-time. Still, she continued teaching at CCHMC until June 30, 2015, “because I wanted to make it exactly 50 years,” she says.

Helping develop successful treatment protocols for childhood cancer might have been enough for most people, but Lampkin spent countless hours of her personal time giving back, too. When she saw how difficult it was for parents to find lodging while their kids received treatment at CCHMC, Lampkin helped raise $1.3 million and co-found a “Children’s Family House” in 1982—the predecessor to Avondale’s current Ronald McDonald House. In 1998, she cofounded GLAD House (Giving Life A Dream), a nonprofit with a mission of “improving the lives of children and their families by breaking the cycle of addiction,” says Lampkin in a video on their website. Now, eight years into official retirement, she’s following in her mother’s footsteps, having helped form a “Rhythm and Songs” band for Alzheimer’s patients at Montgomery’s Twin Lakes, in an effort to “help elderly patients with dementia,” she says. A friend plays piano while she and others help residents sing and play instruments like shakers and tambourines. No matter what, says Lampkin, “We always end with the Stars and Stripes.”

She still wishes she could be back at CCHMC, helping more patients. In her files, she keeps newspaper clippings about former patients and thank-you notes from long-term survivors. She also keeps a school paper a former patient wrote in 1990, titled “An Important Person.”

“I remember once when I was lying in my hospital bed,” it reads, “depressed, close to death, and close to giving up. Dr. Lampkin came to me and told me that she was doing all she could do to help me, and that she expected me to do my share by continuing to fight my illness. That pep talk was one of many from Dr. Lampkin that helped me overcome the lowest points in my treatment. She has not only been my doctor, but she has also been my friend.”