On paper, Liberty Center’s Son of a Butcher doesn’t seem like an obvious choice. The brainchild of Agave & Rye founder Yavonne Sarber, S.O.B. (as the eatery is casually referred to) begs an obvious question: How does one go from serving epic tacos to opening, of all things, a steakhouse? The answer, of course, is that, like Agave & Rye is no average taqueria, S.O.B. is a different kind of steakhouse.

“It actually goes back to how the taco concept started,” Sarber says. “Everything at Agave & Rye is fresh. We use French techniques. Fresh foods—we don’t have freezers—and everything has been in prep. We use mother sauces. And we just happen to put it in a taco.”

Sarber’s background provides a few clues, too. The restauranteur has a background in fine dining, working for master chef Hartmut Hanke of Columbus for six years, followed by a stretch at Morton’s The Steakhouse in Chicago. Coming out of the economic slog of the COVID-19 crisis and observing the changes the pandemic had caused in diners, the time seemed right to try something new. 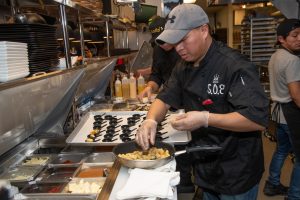 “We felt it was a really good time to give our guests an experience,” she explains. “We’re adding such a fun, unexpected element. They can still get the finest in steaks and Wagyu and all that, but they don’t have to sit at a white tablecloth for three hours and feel so stuffy.”

This focus on vibe is another key to what S.O.B. offers lockdown-weary diners, too, bringing the eclectic design and funky atmosphere that makes Agave & Rye such a fun dining experience to a steakhouse—one of the most traditional restaurant concepts in the history of fine dining.

“I don’t think a lot of people are surprised when they know that we’re the same people from Agave & Rye,” Sarber says, chuckling. “We’ve got what we believe is the most brilliant artist team that does our work, and they travel from location to location, doing each one by hand.”

She points to murals as huge draws, adding that comfort is securely in the driver’s seat for all design choices.

Of course, at the end of the day, the atmosphere enhances the food, and the menu at S.O.B. offers plates everyone can enjoy. Steaks and Wagyu are, of course, front and center, with nine options currently on the menu. And Sarber hopes to beef up signature proteins in the coming months as customers make suggestions and requests.

But there’s more to the menu than just steak, with Sarber pointing out an extensive “Get the Party Started” appetizer menu (including the Million $ Deviled Eggs, which feature gold leaf and have earned quick acclaim), extended cheese and charcuterie board choices, and even a raclette that she says goes with everything from Brussels sprouts to porterhouse.

You’ll also find some caviar offerings on the menu, as well as a burger and a couple of sandwiches. There are signature salads, pastas, poultry and seafood, and even vegetarian fare, such as the five-spice crusted cauliflower steak.

And don’t forget dessert. “I’m so proud of our pastry division and our pastry chef, Cristine [Muckenfuhs],” she says. “Her desserts are a work of art. Literally anything that you order … is memorable, for sure.”

In addition to offering an artsy, eclectic and delectable steakhouse experience, S.O.B.’s location inside Shindig Park Epic Events, Sarber’s 8,000-square-foot event space, extends the dining experience to catering events, too, offering a handful of targeted menus and a variety of rental options. In addition to S.O.B. fare, she says that, if the event calls for it, Agave & Rye can also provide catering.

As of this writing, S.O.B. has only been open a couple of weeks. And given the ambition it takes to tackle a steakhouse concept, one could expect Sarber to sit back and enjoy her success. But she’s already got her eye on the next thing. The team is currently developing a drive-through model called Papi Jochos, which will feature made-from-scratch Mexican street food. The concept will launch toward the end of this year or the beginning of next year in Oakley.

So epic taquerias across multiple states (with more Agave & Rye openings slated within the next eight months), a brand-new steakhouse, an event venue and a to-be-launched drive-through restaurant—it’s a diverse lot, though there is a common thread that runs through all of it. But it might not be what you think.

“The reason we do this—our brand ‘why’—is to give opportunities to our team members,” Sarber says. “We’re going to franchise to our existing team members and fund it for them so they can have their own legacy and work for something for themselves. And all of it just goes back to quality and respect for the food.”