The effect of COVID-19 on the restaurant industry has been, to say the least, disruptive. In recent years, we’ve seen some of the most creative culinary minds in Cincinnati (and the world beyond) struggle to adapt amidst staffing challenges, stay-at-home restrictions, supply chain shortages, and more. For some eateries, reacting to challenges led to innovative solutions. For other restaurateurs, the pandemic’s toll was far more devastating.

Margaret Ranalli of the now-closed Enoteca Emilia in Loveland definitely felt the pandemic pinch. The beloved eatery, with a menu of lovingly crafted Italian fare made with local ingredients and an eye toward seasonality, had only been open a few months in its new Loveland location (after a previous iteration in O’Bryonville closed due to real estate drama) when COVID came knocking.

“It became increasingly more difficult to staff at that caliber,” she explains. “I felt I could no longer operate that concept, which I loved, at the caliber that everyone and, of course, I expected.”

Though it pained her to close up shop on the Enoteca Emilia concept, her experience in the industry told her it was the right decision. With a long restaurant career stretching back to her college years, leading to her starting and running Bronte Bistro for Joseph-Beth Booksellers and later working in management with names such as Tavern Restaurant Group and Five Seasons, Ranalli knew something needed to change. “I was watching restauranteurs who were probably smarter and faster about it pivoting and doing some really smart choices,” she adds.

So in early 2022, she announced Enoteca Emilia would serve its last meal in March, with the space shifting to a new concept and menu in the coming months. Then, Ranalli turned to inspiration gleaned from Charleston, South Carolina, a culinary mecca she’d called home between Emilia Enoteca’s O’Bryonville closing and Loveland re-opening. The end result was the announcement of LoveBird, a new restaurant concept for the Loveland space serving fried chicken and Southern comfort food staples such as biscuits, meatloaf, collard greens, fried green tomatoes, scalloped potatoes, pie and, of course, bourbon. Rotating sides will be determined by what’s in season and available from local growers.

If pivoting from Italian to fried chicken seems dramatic … well, it is, but the shift is the result of Ranalli’s market research into what Loveland eaters want. (It also doesn’t hurt that she ran O’Bryonville’s southern-fried Son of a Preacher Man for a while, either.)

“Fried chicken travels well,” she explains. “It delivers well. You can put a box on the back of a bike and go down the bike trail. You could put it in a canoe, if you wanted. I really was looking for something very picnic-friendly for this outdoorsy, recreation area.” 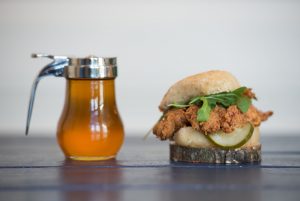 The moves makes perfect business sense—who doesn’t love a fried chicken picnic?—but there’s a layer of personal significance to Ranalli’s concept shift, as well. “I wanted to recreate a reflection of my time in Charleston,” she says.

Her personal Charleston story began after the first closing of Enoteca Emilia, when she suddenly found herself unemployed and, for the first time in years, looking for work. She embarked upon a national job search to leverage her multi-unit management and concept development skillset, and was hired by Charleston’s Midtown Republic restaurant group to conceptualize and build out three restaurants from an empty, 8,000-square-foot space. And like many people, Ranalli quickly fell in love with Charleston’s food scene while there.

“I was really inspired by the level of what they were doing with Southern food,” she says, pointing to the James Beard Award-winning Rodney Scott’s BBQ as an example of excellence in traditional cooking. “I was there two and a half years, and I just could not make it to every restaurant I wanted to get to. It’s just amazing. I loved it.”

Her affection for Charleston aside, though, it’s clear that Loveland holds the restauranteur’s heart. And to that end, LoveBird is a gift both given to and received from the community.

“Loveland is so great and has so much to offer,” she says. “And I feel like we’re going to be really well-positioned to be a part of what’s already going on here and yet, we’ll be uniquely different. I can bring a little Charleston here to Cincinnati.”

Ranallis is clearly excited to be opening a new restaurant concept, but after the uncertainty of the last couple of years, she’s incredibly grateful to still do what she loves—especially to the people of Loveland.

“The community of Loveland is amazing, and our guests have been so supportive,” she says. “I’ve walked around this town the last few months, and people are all like, ‘We’re so glad you’re going to stay here and do something!’ That has been so bolstering after the barbiturate of COVID.”