The most interesting person in the room is almost never the nicest person in the room. Sometimes, though, you walk into a room and see Hernan Iribarren there, and he reminds you that there are always exceptions.

Minor league players don’t usually get sendoffs when it looks like their careers are about to end. Sometimes, though, it’s Hernan Iribarren. There are always exceptions.

The Louisville Bats played their last two games of the season Labor Day weekend. In the first game, Iribarren’s daughter threw out the first pitch to her dad. He’s been known to run the bases with her on Sundays when all the kids from the stands are allowed a trot around the diamond.

I’ve been in the press box for Bats games for three years. Not only have I never heard anyone say anything bad about Hernan Iribarren, I’ve had countless people go out of their way to tell me how kind he’s been.

There’s the kindness. There’s the nicest guy in the room. But what about interesting?

In the final game, Iribarren started at catcher and hit lead-off. Then he played first, then second, then short, then third, then he pitched, then back to third, then left, center, and right. He played the first two outs of the ninth at second, where he once played in the futures game. It was his first career appearance at catcher. Everywhere else he’d played many times, even in just the last few seasons. With one out to go in the top of the ninth, he trotted out of the game to a standing ovation.

I asked him about it once—how he’d come to play everywhere—and he told me he just kept saying yes when he was asked if he could play somewhere. Short? Yes. Third? Yes. And so on.

When he was given a call up to the Reds in 2016 (his first major league time in seven years), it was partially because he was beloved by the organization, but also because he could play. He won the International League batting title that year while also being good defensively everywhere Louisville put him. And all he did with Cincinnati was hit .311.

Hernan has made mistakes, and he’ll tell you about them. He’ll own up to everything he’s done. He won’t blame anyone else. That’s not common these days. If he spends time with a player, you get the feeling things will work out. When Hernan told me Dilson Herrera was his roomie on the road this year and that Herrera had a great attitude, I figured he’d be up with the Reds before too long. When Hernan told me he was talking to Jose Peraza when he stumbled out of the gate this year, I figured Peraza would be OK.

Not that Iribarren would take credit for any of that. Claiming that he wanted credit for what those players have done might be one of the few ways to genuinely offend him, so I won’t do that. But he can tell you stories. He can tell you a lot about baseball. If your top prospect is learning a new position, you’re glad when you have Hernan to help with the transition.

Hernan had 74 plate appearances in the major leagues, batting .264/284/.389. Not the career he’d hoped for, but his career isn’t over either even if he might be done playing. And there’s more to life than a baseball career anyway, as Hernan will tell you.

This has been a rough season to cover. The Reds have been bad and the Bats were bad, too. There was all kinds of turmoil. Going into the Labor Day weekend, I was, to be honest, ready for the minor league season to be over. But then Hernan Iribarren played all nine positions. I don’t know how often that’s happened in the minors, but it’s only happened in the majors five times ever. 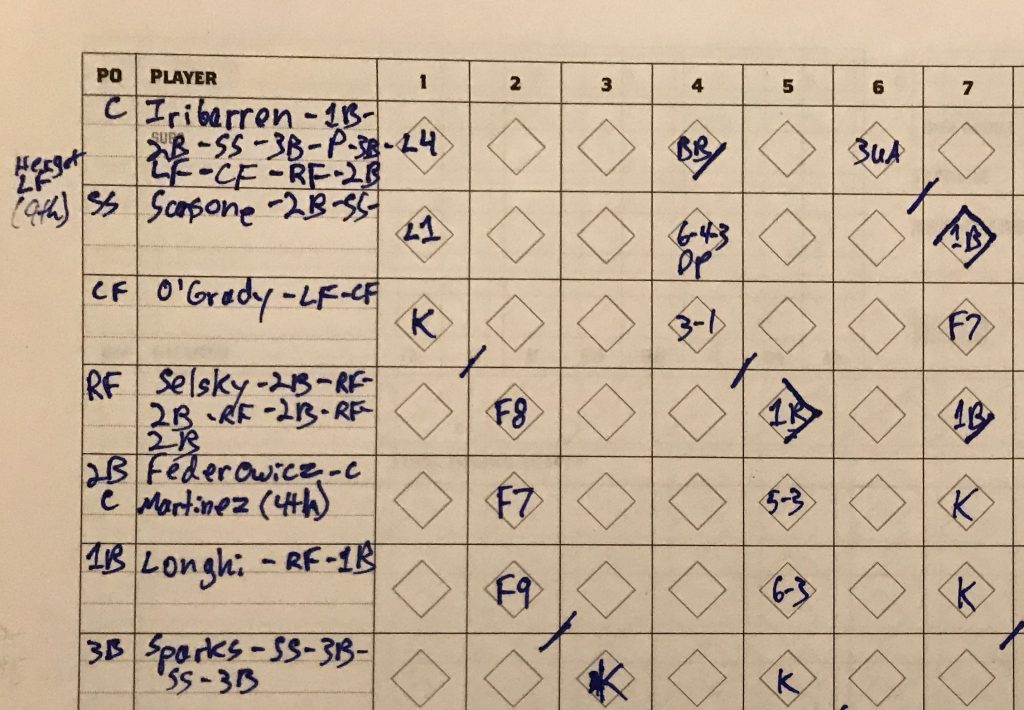 Other Bats players were sliding all over the diamond from one inning to the next as Hernan made his way around. The game ended with a pitcher in left and an outfielder at second and with me being reminded that baseball is fun. Funny what the right people can do.