Jack Shuler’s This Is Ohio: The Overdose Crisis and the Front Lines of a New America (Counterpoint Press) explores the heart-rending and resilient stories of Ohioans impacted by addiction, following individuals as they work through poverty, heartache, prison, and bureaucracy. Shuler, who chairs the journalism program at Denison University, also shows communities coming together to provide support and increase connectedness. By arguing for a more holistic explanation of the cause of the crisis and paying close attention to harm reduction efforts, he provides an empathetic look at where the state has been and where we should go.

Walk us through the key terms in your title: overdose crisis, front lines, and new America. How do these terms, which emerged from your reporting over several years, help frame the story you tell?

I think the press and popular culture have paid a lot of attention to the role pharmaceutical companies have played in flooding communities with opioids, for good reason. It’s an important story about lack of oversight, greedy companies, and communities with little access to healthcare finding a quick fix. But that’s not the only story, and it’s certainly not the one we need to focus on right now.

Today we need to focus on saving lives. Too many people have died, more than 93,000 last year. When I say “front lines” I mean that this book is focused on the people who are on the ground in a community affected by the overdose crisis who are learning—in real-time as I’m reporting—how to address that crisis. It’s an amazing story about mutual aid and organizing and people who have never felt they had a place to speak up in this country finding their collective voice. It’s what I love about this country—creative, community-minded, loving people gathering together to make change against unprecedented odds.

The book’s cover features eight people looking solemnly into the camera under the heat of a bright sun. Many look like determined mothers. Who are they?

By chance, these people were at the Newark Homeless Outreach one Saturday when I was in the town near Granville [home of Denison] with my friend Doug Swift, a documentary filmmaker. I gathered them together, and he snapped the photo. I wanted a tough image that underscored the scrappiness of the folks I profile in the book; I imagined it would look almost like a movie poster. And yet, these are just average people who have rolled up their sleeves and are, in my mind, superheroes. In the photo are organizers and direct service folks. All are parents. All of them show up. 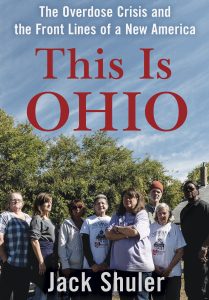 How do you think community trauma like economic inequality and hopelessness contribute to the crisis?

When you look at the places where overdose rates are particularly high, trauma is hovering around. There’s ample evidence based on peer-reviewed research—the footnote on this in my book is two pages long—that there’s a relationship between economic struggle as well as marginalization based on race or sexual orientation and overdose as well as substance use disorder.

If you don’t have access to resources, it’s harder for you to get healthy. I don’t think that’s too controversial. But there’s also strong self-centeredness and not community-centeredness ethos in this country right now. I’m thinking here of the response to COVID by some Americans. I know that the tension between individual rights and community rights is as old as the nation itself, but our obsession with self is killing us.

The book explores the tension between competing approaches for dealing with the crisis: stronger “law and order” on the one hand and “harm reduction” on the other. How did these differing approaches play out in Newark over the last four years or so?

The war on drugs hasn’t worked. That became painfully clear to me as I reported. We’re asking our judicial system to address a health crisis. If you like sports analogies, and I do, it’s like asking a placekicker to snap the ball. I honestly don’t think it’s fair that we ask law enforcement to deal with things we, as a society, haven’t addressed—sending police to shut down an encampment of unhoused people, for example. We need to be bold and work to keep people alive, and it doesn’t seem to me like some of our interventions are working. If we’re really going to treat substance use disorder as a health issue, then let’s do that. Completely.

You write, “Real systematic change looks like a movement of empowered people. And there are glimmers of that here.” What interventions make you feel the most hopeful?

We need to get naloxone into the hands of people who use drugs and their allies now. There’s plenty of research about which interventions work to address overdose. To be clear, I’m talking about overdose and not really about the broader issue of addiction. Not everyone who uses drugs is addicted.

Some overdose interventions challenged my own thinking, and then I reported and researched and learned and had to stretch my thinking. For example, if someone has a substance use disorder and they’re going to a syringe service program, they are more like to go into treatment—and they are also less likely to get Hepatitis C, HIV, or endocarditis. They’re also more likely to have access to naloxone. But there aren’t enough programs, and they aren’t always accessible. Another thing that would help is greater access to medication-assisted treatment, including methadone, especially in under-resourced communities.

People also need access to housing, transportation, and health care—especially mental health. If someone is in recovery, it’s important to have a supportive community, so we need to think about supporting recovery community organizations. People are more likely to die of an overdose when they’re alone, so safe consumption spaces or overdose prevention sites would help a lot. And we need to support the kind of grassroots folks who are on the front lines and make their work sustainable—financially and, more importantly, emotionally.