In the 1800s, Cincinnati diners consumed some 200,000 gallons of fresh oysters every season, shipped in the shell on ice from the east coast. That works out to something like 2.5 million oysters per year. The volume is remarkably consistent between reports in 1852 and in 1888. In the 1880s, 30 Cincinnati businesses either packed or served oysters. 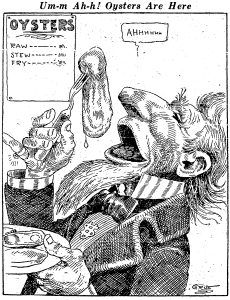 As early as the 1810s, Cincinnatians consumed oysters shipped pickled or spiced in hermetically sealed canisters. By the 1830s, entrepreneurs had worked out a system of speedy wagons to get fresh oysters from Baltimore to Wheeling, where steamboats could haul the tasty molluscan cargo to Cincinnati. From Chesapeake Bay to the Public Landing, the entire trip took just five days, with new ice added along the way to keep the oysters in prime condition. Within a few years, railroads shortened that run to just hours.

Pretty much everything about Cincinnati disturbed Frances “Fanny” Trollope. The acerbic British lady vented her displeasure in her 1832 best-selling Domestic Manners of the Americans, where she whined about Cincinnatians: “In eating, they mix things together with the strangest incongruity imaginable. I have seen eggs and oysters eaten together; the sempiternal ham with apple-sauce; beefsteak with stewed peaches; and salt fish with onions.”

Mail runs were profitable for stagecoach lines but not as profitable as oysters, and barrels of iced blue points were shoved into every available space on wagons departing Baltimore. The Daily Gazette [February 5, 1846] reported that mail deliveries to Cincinnati were arriving late because the postal coach had broken down from being overloaded with oysters. 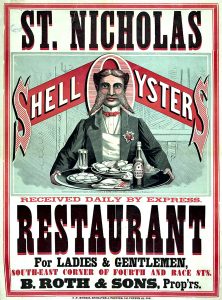 S.B. Nelson’s 1894 History of Hamilton County recounts the tale of Columbus Bennett, a school teacher in Anderson Township who enlisted early in the Civil War. He served with distinction for several years until captured by the Confederates. Eventually paroled, on reaching Union territory the famished prisoner consumed his “first square meal in eight long months, consisting of thirteen dozen raw oysters.” He survived to teach another 30 years.

Romance on the Half-Shell

The Enquirer [December 2, 1874] recounts local speculation about William “Billy” Stolpp, the keeper of an oyster house at 159 West Fourth Street, and his extended trip to Baltimore. His friends and customers assumed his long absence involved acquiring a stock of fresh bivalves for his shop. In fact, Billy soon returned to Cincinnati with his new bride, the former Miss Lizzie Evans of Baltimore, whom he’d wed in that city.

Six Words and $700 Created a Legend

James A. “Jimmy” Shevlin was no dummy. He was working as a bank teller when he noticed the substantial and regular deposits from the Central Oyster House on Sixth Street. “There is money in that game,” he said and borrowed $700 to open his own oyster house on the same block. Jimmy’s advertising slogan was If it swims, I have it, and Shevlin’s Oyster & Chop House became a hangout for Democratic politicians and celebrities of the baseball, boxing, and horse-racing worlds.

The WPA Guide to Cincinnati reports that, in the 1880s, Boudinot and Wardall avenues in Westwood were part of what was known as Shell Road. “The story goes that one winter a landowner sent his hired man almost daily to Cincinnati hotels and restaurants to obtain wagon loads of oyster shells. These shells were then scattered over the roadway. Horses’ hoofs ground them fine and created a shining white roadbed.”

If Cincinnatians didn’t feel like taking a streetcar to their favorite restaurant or walking to the local fishmonger, they could just wait until the oyster hawker pushed his wagon past their residence. In the 1880s and 1890s, Cincinnati streets were crowded with pushcart merchants offering to mend umbrellas, sharpen knives and scissors, grind some fresh mustard, slice watermelon, shovel coal and, yes, shuck a dozen oysters from an ice-laden cart.

No matter how Cincinnati diners ordered their oysters, whether fresh out of the shell or steamed or breaded and fried, they usually added some sort of flavoring. If the condiment of choice was a hot sauce, odds are it was brewed right here in the Queen City. Two brands of locally concocted chili sauce in particular, Snider’s (1900) and later Frank’s (1918), had wide distribution outside the tri-state region.

The Pig Is Still King in Porkopolis

A 1905 Dictionary of Slang and Colloquial English by John Farmer and William Henely defined “Cincinnati Oyster” as “a pig’s trotter”—in other words, a pig’s foot. The prevalence of pigs in the Queen City inspired many saloons to offer pigs feet as a regular component of their free lunch buffets.

World War I did nothing to abate Cincinnati’s hunger for oysters, even though wartime conditions hiked the cost of their favorite bivalve. In 1917, most Cincinnati oyster houses raised the price of oyster stew from 20 cents a bowl to 25 cents. Restaurateurs blamed the war, and customers blamed the Kaiser for starting the conflict.

Oysters for the Jury

Among the most sensational trials in Cincinnati history was the land-scam scandal of Roy Van Tress. At the conclusion of the court proceedings, resulting in Van Tress being sentenced to federal prison, the court received a bill of $848.46 from the Havlin Hotel for housing the jury and a bill for $1,383.75 from Shevlin’s Oyster House for feeding them. At that time, an oyster dinner with all the trimmings cost about 35 cents. That’s a lot of oysters!

In addition to newspaper reports, there are witnesses who attest that William Whipple Symmes, great-grand-nephew of John Cleves Symmes and prominent Cincinnati attorney, earned free oysters for life at the Central Oyster House. In one version, reported by Alfred Segal in The Cincinnati Post [June 22, 1946], Jacob Rosenfield, the proprietor, realized that Symmes had been a regular customer for 30 years and presented him with a free pass for the remainder of his days.

Another Post columnist, Si Cornell, reported [March 16, 1971] a different rationale for the free oysters, citing W.W. Symmes’ law partner, William Busch, as the source. According to Busch, Symmes heard that Cincinnati was paralyzed by an “oyster scare,” rumors that oysters “weren’t much good and maybe worse.” Symmes contacted the Central Oyster House and offered to sit in the front window eating Jacob Rosenfield’s oysters for everyone to see. Business picked up, and the proprietor repaid his customer with “on-the-house” oysters ever after.

Still a Lot of Oysters

Jacob Rosenfield’s old Central Oyster House was demolished in 1958 to make way for the new Federal Building on Government Square. The owner at the time, Rosenfield’s grandnephew Jake Spicer, proclaimed that the Central Oyster House would reopen nearby, because business was too good to close—averaging 4,000 hungry customers a day. One of Spicer’s employees calculated that she’d served 32,260,000 breaded and fried oysters during her 40 years at the restaurant.