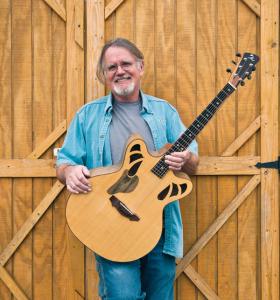 Zeiler. “I realized I had to do something to earn money,” says the Rising Sun, Indiana, resident about the years following his 1987 post-deal fallout. “My dad was a homebuilder, and I grew up doing cabinet-making. I saw an ad to learn how to make guitars.” That’s all it took for Zeiler to uproot from New York and head to Minnesota State College-Southeast Technical to pursue a degree in Guitar Repair & Building. Eighteen years later, Jamonn Zeiler Guitars has sold more than 100 custom guitars worldwide. The success, he says, lies in the build. “If you’re a factory, you have to build guitars strong enough to not get a lot of warranty work because you don’t want them falling apart,” Zeiler says. “I don’t have to worry about warranty work so I build them very light, which lets the wood vibrate. The vibration is key.”
Each handcrafted guitar takes roughly two months to complete and comes with your choice of personalized details—one client requested a brass-and-pearl-inlaid genie lamp. Prices start at $4,250 for classical models and $3,500 for steel string; he has an eight-month waiting list. “Ninety-five percent of guitar players buy for looks,” Zeiler notes. “They won’t admit it, but they do. If it looks great and sounds good, they’ll buy it.”
For his own playing, however, Zeiler focuses on the sound, not the looks. “My favorite wood is mahogany. It’s a great tone wood,” he says. “I like to make a very simply appointed guitar that’s tastefully done with beautiful, subtle woodwork.” And although he’s found his money-making niche, Zeiler admits he will always be “a musician first.” Should you ever catch him belting his folksy tunes from a local stage (he has regular gigs at The Courtyard in Rising Sun), you’ll notice that he plays as hard as he works.