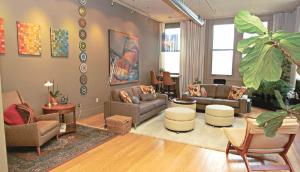 If you’re looking to move downtown, you can’t get much more centrally located than this condo in the Fourth National Bank building. Even though Tom Borcher and Valerie Louis are selling this 10th floor, 1,950-square-foot unit for $385,000, they plan on staying in the neighborhood. “I’ve walked to work every day for 15 years,” says Borcher. Why ruin a good thing?
The 1905 building was originally a bank (as its name suggests) and offices; it was converted to condos between 2003 and 2005. Amenities for all residents include keyed elevator access directly into each unit, parking spaces in the neighboring Westin garage, and storage lockers in the basement. The modern loft-style units—two per floor—bear few reminders of the building’s buttoned-up past, but architectural purists will delight in the lobby, where the original brass-framed entry and elevator doors, and marble walls and flooring, all remain relatively untouched. 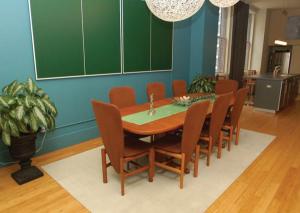 Borcher is one of the building’s original homeowners; when he bought the place in 2005, he enlisted the help of local designer Leah Spurrier to bring it to life. Features like the fiberglass chandelier in the dining room and sliding screen panels on the kitchen windows add to the home’s modern, “clean” feel, he says. 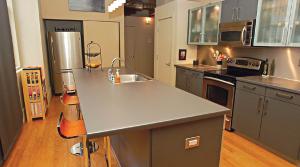 Spurrier’s and Borcher’s work earned the unit a place on the 2006 Downtown Tour of Living, a Cincinnati Magazine interior design award the following year, and a 2009 feature on HGTV’s What You Get for the Money. In this case, you get convenience—and a lot of style.