And now, the final part in this series explaining the origins of our city’s street names, from R to Z.

Dr. Augustus Ravogli had an important but unusual specialty. He was a syphilologist. In the days before penicillin and other antibiotics became available, Ravogli and his colleagues struggled to find a cure for syphilis, or what the newspapers of the day referred to as the “loathsome disease.” He was also a renowned dermatologist, and served as Italian consul in Cincinnati. His efforts to improve the image of Italian-Americans by condemning organized crime earned him several death threats, purportedly from the Mafia.

From the late 1870s until around 1917, Cincinnati maintained a red-light district in the West End, from Central Avenue west to Mound Street and from Fifth Street north to Seventh Street. Between Fifth and Sixth ran a street called Longworth. Between Sixth and Seventh ran George Street. Most of the red-light brothels were located on Longworth and George, mingled among otherwise respectable homes. Those residents not profiting from the sins of the flesh regularly petitioned the city to change the name of their block to remove the salacious taint. Consequently, parts of Longworth became Carlisle Avenue and Opera Place, while parts of George became Kenyon Street and Shillito Place.

Bordering the north side of City Hall is the only street in Cincinnati to honor a janitor. John Lambert Richmond left New York State with just a few weeks’ schooling, determined to become a medical doctor. With no formal education, admission to any of Cincinnati’s medical schools was impossible, but he secured a position as janitor at the Ohio Medical College. While working, he would linger at the classroom doors, absorbing the lectures. College president Daniel Drake recognized Richmond’s interest and acuity and encouraged his studies. Richmond eventually learned enough to go into practice. In 1827, at Newtown, Ohio, Richmond performed the first caesarian section birth in the United States.

There is a real romance behind Romance Lane in Delhi. Way back in 1915, a young salesman named Fred Duebber met a young lady named Alma Stetter at a picnic grove known as Green’s Woods off Anderson Ferry Road. Their courtship blossomed and they married on 28 November 1918. Forty years later, Fred, now investing in real estate, bought a portion of Green’s Woods to develop as home sites. There must have been some magic in those woods. For some years, Green’s Woods provided the venue for the reunions of the Rutenschroer family, with attendance regularly topping 100 offspring of offspring.

Salvator (notice the T) was a great horse, a hall-of-fame horse that dominated racetracks from 1888 through 1890, setting a world record for the mile. Despite his talents, Salvator could not spell, and nor could the Cincinnati city functionary who named this street “Salvador” in honor of the equine champion. It appears that the city was in a hurry to replace the old name for the street, Flour Barrel Avenue. The original name derived from a property owner who paved his sidewalks with the lids of old flour barrels.

The name of this street has nothing to do with a deficiency in tension, nor is it the singular of slacks, nor does it refer to the main goal of the Church of the SubGenius. Little Slack Street, bounded on the south by WLWT-TV, honors the memory of Dr. Elijah Slack, Presbyterian minister, first president of Cincinnati College, and among the founders of Cincinnati’s first medical school. Known as a good chemist with no sense of humor, Slack once picked up a pig’s bladder—used at the time as a laboratory container—and announced, “I shall now fill my bladder and proceed to make water.” He could not understand why his class broke into hilarious laughter.

There are some streets for which the origin of their names will forever remain a mystery. One is the short, address-less Stacon Street off Stanley Avenue in Columbia-Tusculum. Although there are people named Stacon, none appear to have ever settled in Cincinnati. A company in Illinois named Stacon manufactured temperature-control devices and we might imagine a clerk at City Hall, stumped while trying to imagine a name for a vacant street, finding inspiration on the thermostat. A reporter for the old Cincinnati Times-Star [27 November 1954] was skeptical when informed “Stacon” was a combination of two proper names and preferred to think it was just “No cats” spelled backwards.

You will search in vain for this street which, for 100 years, memorialized Confederate General Thomas J. “Stonewall” Jackson. Up until 1917, this hilly ramp among the old breweries was known as Hamburg Street. As the United States entered World War I, public sentiment demanded that any streets with “Hunnish” names get relabeled pronto. As Berlin Street became Woodrow Street and Hanover Street became Yukon Street, Hamburg Street became Stonewall Street. The anti-German designation for a handful of Cincinnati streets was reversed in 2017, due to the efforts of local historian Don Heinrich Tolzmann. Stonewall was returned to Hamburg.

Farmer John Fitzhugh Thornton died in 1907 at the age of 65 and his obituary mostly mentioned his famous grandfather, William Henry Harrison, and his cousin Benjamin Harrison. In 1912, Thornton’s widow, Eliza, donated a triangular bit of land just off River Road as a memorial to her late husband and decorated it with a fountain topped by the iron statue of a Native American warrior named Standing Watch or, in some tellings, Tecumseh. All was well until 21 December 1940 when James Bemberling, 21, of Covington, Kentucky, crashed into the monument and sent Standing Watch (or Tecumseh) crashing to the pavement. A few months later, residents of the Fernbank neighborhood were shocked to learn that their Indian had been sold for scrap, and for only $10 at that! The buyer, Nell Doctor of Aurora, Indiana, said she was willing to sell the statue back to the Cincinnati Park Board, but wanted $300 because her husband, Harry, had repaired and restored the damages caused by the crash. Mr. Bemberling’s insurance company coughed up $400, Mrs. Doctor was paid, and the statue was remounted on 14 April 1941.

Price Hill is not now, nor has it ever been, particularly Polish. And yet, this neighborhood boasts two streets named after the capital of that eastern European country—Warsaw Avenue and Cleves-Warsaw Pike. The anomaly is explained by examining old maps which reveal that a small village named Warsaw (even though it was founded and populated by Germans, not Poles) existed for many years along what is now Glenway Avenue between Sunset Avenue and Rapid Run Road. Cleves-Warsaw Pike ran, not surprisingly, from Cleves to Warsaw, and Warsaw Avenue ran from Cincinnati to Warsaw.

Right off Beechmont Avenue, there’s a monument to the World Champion 1919 Cincinnati Reds that thousands of commuters pass each day without notice. Wilaray Terrace memorializes two stalwarts of that team, short-stop William Lorenz “Larry” Kopf and outfielder Raymond Bloom “Rube” Bressler who got into real estate development while still participating in pro ball during the summers. While early advertisements for the Wilaray subdivision featured baseball stars Larry and Rube, their silent partner (the “Wil” of Wilaray) was Willard Kopf, apparently the only Kopf brother without a significant athletic career. It’s reported that some of the first sales were to teammates and that some houses have baseball-themed stained glass. (Thanks to Robert Hayes for the tip.) 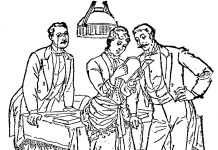 Cincinnati’s 1885 Election Involved Every Trick, Up To Hiding Votes In A Whorehouse