Home Home + Garden If Walls Could Talk: This Eclectic Victorian Home Has a Vibrant History

Jayn Meinhardt had questions about her historic East Walnut Hills house from the very beginning. She can still list them off, rapid-fire.

“Why was there a sub-basement when the house had been built years after slavery had ended? Why had the owner chosen this lot rather than one on the hillside? Why were there religious artifacts boarded up in the tower room? Why was there a hand pump in the kitchen? Why were there two entrances into the front hall? There was no carriage house or place for horses. How did the family get around? Who had painted those gorgeous frescos?”

For a while, her questions went unanswered. But when she reached out on a whim to a local woman with the same last name that was plastered on a plaque near the front door, the response opened the floodgates: Grandpa’s house?

The Victorian eclectic home was built in the 1870s for J.F. Moorbrink, a prominent merchant tailor who made his fortune outfitting locals at his shop downtown at Sixth and Vine. Moorbrook needed plenty of space for his brood of 12, and spared no expense in building the 7,000-square-foot structure, with the Enquirer noting that he “drew no boundaries in his search for the elegant.”

The Meinhardts got answers to their questions over tea, and while most of them weren’t as romantic or exciting as they’d imagined, they gave the new owners a stunning degree of insight into the lives of the home’s original residents. Instead of rounding up a dozen children for church each Sunday, for instance, the family converted the tower room into a chapel and had a priest stop by to give a weekly sermon—which would probably explain the musical instruments and religious pictures in the tower.

The granddaughters knew about things that even the Meinhardts had never noticed, like the wall safe that had been wallpapered over and the origin of those “gorgeous” frescos, which had been hand-painted by 18th century artist Wenceslaus Thein, whose talent was typically reserved for local churches, including St. Francis de Sales in East Walnut Hills and Mother of God Church in Covington. The Meinhardts, who have lived in the house since the mid-1970s, are saying a bittersweet farewell to their beloved McMillan home. But their “fervent” hope, they say, is to find a buyer who shares their enthusiasm and will appreciate the home for its vibrant history—and the families that came before. 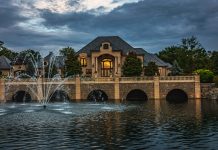