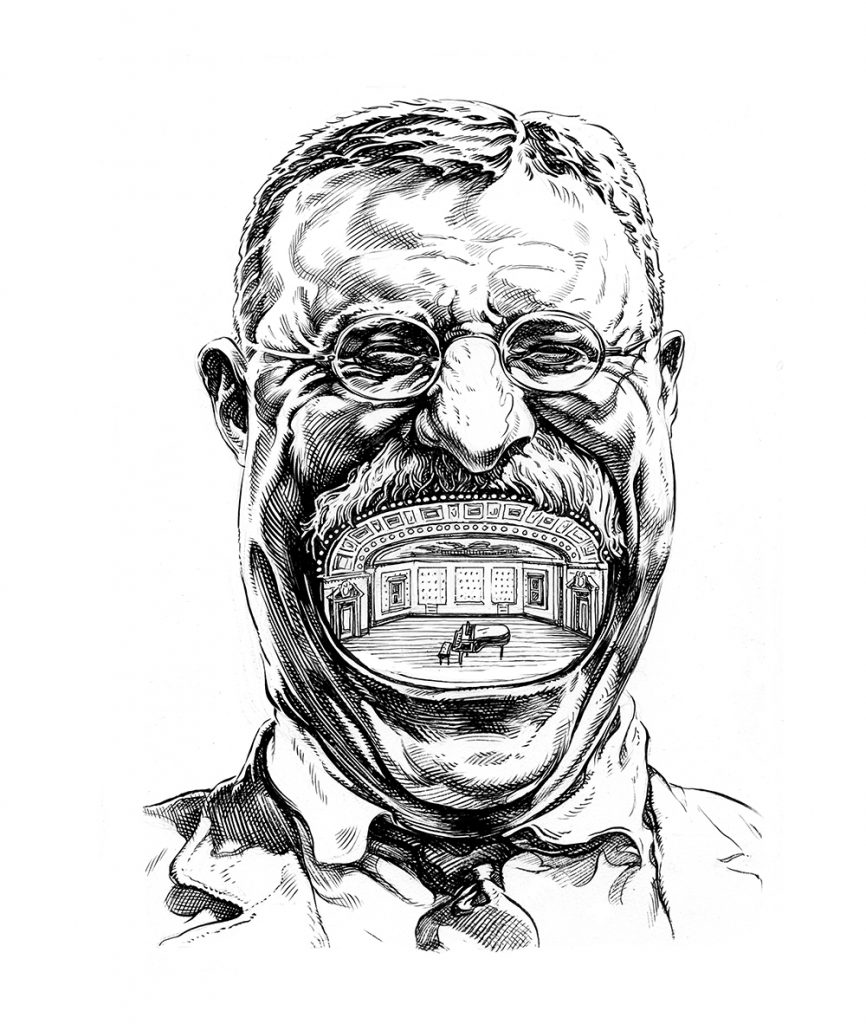 I recently attended a show at the newly renovated Memorial Hall for the first
time. It’s a great venue, but what’s with the giant-sized words plastered above the stage? I saw stuff like Will and Patriot and Martyrdom, and I especially remember Manliness. Whatever is that all about? —MEMORIAL SCRAWL

Dear Scrawl:
The fattest folder on the Doctor’s cluttered desk contains questions about the oddities of Cincinnati’s buildings and homes. He shall attempt, therefore, to reduce the bulge by answering three of them this month. Brace yourself: big words ahead.

Memorial Hall has a proscenium arch traversing the stage (pulled out your dictionary yet?). It displays nine “virtues:” Unity, Wisdom, Martyrdom, Patriotism, Philanthropy, Integrity, Manliness, Equity, and Will. These invigorating nouns had originally been sprinkled throughout a motivational speech delivered in 1899 by Teddy Roosevelt—arguably, the first Ted Talk. They were thus chosen to be plastered, in actual plaster, atop the Memorial Hall stage as homage to America’s manly-man war veterans, for whom the Hall was built in 1908.

Today’s eyes, as you suggest, glance warily at the word Manliness. Attendees at current-day events—more than 200 per year since the Hall’s renovation—may see it as saying No Babes Allowed. Not all traditions age well. Perhaps someday the word will be re-plastered, saying something like Inclusion, Diversity, or Gluten-Free.

There’s a house near me in Pleasant Ridge that looks like it was it was left too long in the dryer! It’s so small! How did this brightly decorated dollhouse get plunked among the regular-sized homes on Harvest Avenue? It looks like a tornado from Munchkinland dropped it there. —AND YOUR LITTLE DOG, TOO

Dear Dog:
Your instincts aren’t too far off. Pleasant Ridge’s miniature house wasn’t dropped from the sky, but it did get transported there from its original location in Golf Manor, where it began as a sales office for the area’s developers. That was in the early 1930s; the building got re-planted in 1939. Hey, that was the year of The Wizard of Oz movie, so feel free to assume that the house began in black and white, rose up, twisted through the air, and landed at 3221 Harvest Avenue—in Technicolor. Let’s not ask whether it fell on anyone.

The Brady Bunch would certainly feel more at home inside their little squares rather than inside this minuscule domicile. But for one or two people at a time, the home is a cozy conversation piece. Plus, it’s perfect for anyone who wants to escape the family rotation for hosting Thanksgiving.

Near the intersection of Columbia Parkway and Taft Road, a mysterious house has sat vacant for something like 30 years. I drive past it every day, and it’s noticeably unoccupied. I’ve heard many rumors and theories, but I hope you can uncover the truth about what’s (not) happening there. —UNFULL HOUSE

Dear Unfull:
This is the most repeated “what’s up with that weird house” question inside the Doctor’s fat folder.

Upon first glance, the weird house doesn’t seem that weird: it looks like a typical 1970s-style home. Only on closer inspection do you notice that one section is clearly much older (built in 1937), that the rest was added around the time of Mork & Mindy, and that the additions seem to have been neither completed nor occupied.

Here’s the soap opera as best as the Doctor’s research can confirm: David and Dora married in 1960, had a daughter in 1964, divorced in 1968, remarried in 1976, and bought the house at 1948 Taft Road in 1978. The expansion began soon afterward, but things then sputtered. David and Dora ended again in 1986; so did construction. City permits expired in 2003 because nothing had happened. The property now appears to belong to the daughter, who may live in College Hill, or in Georgia.

The Doctor’s drive-by observes that the home’s two parked vehicles have flat tires all around, but somebody is at least cutting the grass. Still, we are not sure if anyone’s home.

The investigation will continue. In the meantime, drivers along Columbia Parkway are reminded to avoid staring when passing this mysterious property. Do not become dangerously distracted from keeping your eyes on the landslides.