Sal Dali is basking in the glow of a major win. As a producer, he’s a long way from looping sections from hip-hop “cassingles” for his friends to rap over. His industry résumé now boasts two production credits on Beyoncé’s album Renaissance, which debuted at No. 1 on Billboard a couple of weeks ago.

For Dali, whose mother is from Cincinnati and father is from Senegal, being one of the collaborators behind Renaissance’s kaleidoscopic mashup of club music’s estranged disco kinfolk—Chicago house, New Orleans bounce, New York freestyle, and Afrobeat—feels surreal.

“There’s been a lot of celebrating, of course,” the Avondale native says. “I don’t even know if I’m processing it entirely yet.”

When Dali’s production partner L.V. called him to come to Los Angeles to work on projects last spring, little did he know he’d move there permanently or that the duo would stumble into Beyoncé, and eventually be in the studio with her, recording songs for a new album. After those sessions, Dali sat on pins and needles for what felt like forever waiting to find out if their songs were approved.

“We worked with her [around] May of last year, and at the time, everything went so well when we were with her that I was pretty positive we were going to be on the project,” Dali recalls. “I was thinking that it was coming out pretty soon. It got to the point where I was like, ‘I’m not sure if we’re going to make it [on the album].’ I was really just praying every day, like, ‘Please, this has to go through, because I don’t know if I’ll be able to recover from this.’ I was grateful for the experience and being able to be [in the studio] and impress her. But I was like, ‘Nah, this gotta be official—we gotta be on the album. I need my name on those credits.’ ”

A week before Renaissance’s July 29 release, Beyoncé posted the album’s credits to social media. Dali rejoiced when he saw his real name—Saliou Diagne—listed as a co-producer of the Afrofuturistic EDM romp “Alien Superstar” and the idyllic closer “Summer Renaissance,” which interpolates Donna Summer’s “I Feel Love.”

“We already knew coming in that she was trying to do a dance record and it was heavily disco, Studio 54 influence,” Dali explains. “That’s the kind of stuff me and L.V. have already been doing for the past few years with our Jacuzzi Spiritual Advisors project. We knew going in she was looking for a dance/disco vibe, so we wanted to encapsulate that as best as possible.”

Asked what made him become a producer, Dali recalls being an introverted teen heavily into hip-hop and R&B culture who feverishly read liner notes and dubbed hits from the radio. He and his friends, who were all MCs, grew up admiring definitive icons of the era, such as 2Pac, Notorious B.I.G., Wu-Tang Clan, and Nas. Dali’s ear for music further developed through analyzing styles of producers like Wu-Tang’s RZA, and later, Hi-Tek. Years before he’d ever tapped pads on a drum machine, his friends designated him as “their producer” because of his discerning knack for finding the “right” instrumentals for their freestyles.

“I was actually producing back then and didn’t realize it,” the 40-year-old says. “I didn’t know what I needed at the time to create because I didn’t know anybody that did it. It wasn’t like it is now where everybody has software that you can download on your laptop; you needed to know somebody who actually had expensive equipment, and I knew nobody who had any of that.”

While studying at the University of Cincinnati, Dali befriended an independent producer named Bill Tribble, who helped him learn beat making, studio engineering, mixing, and production.

“He was the first person I met who actually made beats and produced,” Dali remembers. “I was so amazed at his life. He would be in his mother’s basement recording guys for like $20 an hour and selling beats for $20, and it was the coolest thing in the world to me at the time.”

With Tribble, he co-produced neighborhood friends and cofounded IllumiNATI, 15 MCs of varying styles akin to Wu-Tang Clan. Recording with them taught him how to navigate different artists’ personalities and egos.

Being introduced to Hi-Tek by his friend, DJ Jentel (who was Hi-Tek’s studio manager), was how he landed his first gig as a recording engineer. Having the Cincinnati-based producer give a nod of approval at his music was the boost he needed.

“I was making music locally for so long with guys that were on my same level and I didn’t know exactly what it was going to take to get to the next level,” Dali explains. “But I got to watch [Tek] and use him as a measuring stick on what it takes to be a professional. He showed me what was possible for music.” 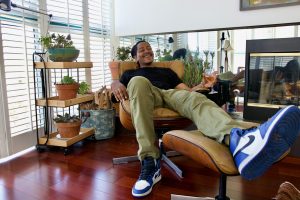 “When I walked into his studio, TekLab,” Dali continues, “I was like, ‘Damn, this was built off music from a guy from the ‘hood in Cincinnati just like me.’ To even see that was a big deal for me. Work wise and creatively, I got to see his attention to detail and how he focused on the smallest, minor detail for hours.”

When he turned 30, Dali realized he needed to leave Cincinnati to attract broader opportunities. Jerald Cooper, who was also from Cincinnati and managing Young Guru (Jay Z’s former producer), helped his move to New York happen by making Dali Young Guru’s assistant engineer. That pairing helped him land Viacom placement deals, where his production work was featured behind a variety of programming, including The Tonight Show with Jimmy Fallon, CBS’s Unicorn, BET’s Sistas, and ESPN’s NFL Draft.

Dali also became part of P. Diddy’s production team for about three years in New York and L.A. with producers Sean C. and L.V., and today, he still works with the duo in L.A. under his production company, Stable Genius Group LLC. Of his experience with Diddy, he says, “He’s a very musically conscious person; he knows what’s going on, so it’s hard to get anything past him. That kind of prepared me to be in any room and with Beyoncé, which was amazing.”

Aside from his work on Renaissance, the resourceful producer remains busy. He produced two tracks on Sons of Silverton’s God God Us, and he and L.V. co-produced two tracks on the third installment of Black Thought’s Streams of Thought, Vol. 3: Cane & Able—“Good Morning,” featuring Pusha T, Swizz Beats, and Killer Mike, and “Quiet Trip” featuring Portugal. The Man. He also produced “Written in the Stars” for Joey Bada$$, which was released in July. Currently, he looks forward to collaborating with local artists, Speed Walton and Brody Merlot, and contributing to the soundtrack of Bruce Willis’s upcoming action thriller, Die Like Lovers.

Overall, Dali’s takeaway from laboring behind the scenes as an engineer was that it wasn’t for him. He compares the grind to being a waiter, and he is empathetic toward an engineer’s essential role.

“If you don’t have a great relationship with the artist you’re recording, you kind of get blamed for everything,” Dali laments. “People are hard on engineers. Like, if the artist sounds bad, it’s the engineer’s fault. If there’s something wrong with the computers, it’s the engineer’s fault. And people feel like they can just talk to engineers however they want to. That didn’t really sit well with my spirit, but what I got from that is I’m a producer and not an engineer. I can engineer but production is my focus.”