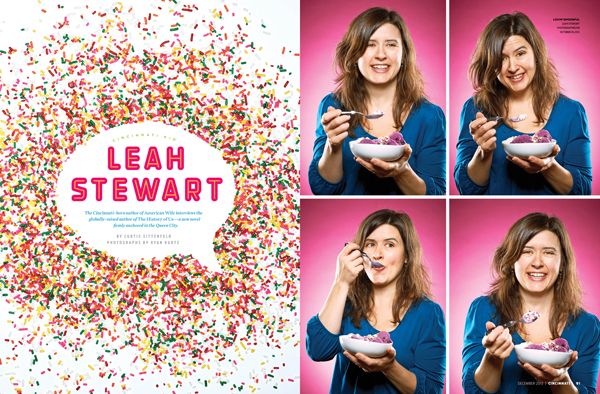 I haven’t lived in Cincinnati as an adult, but if I ever do, I definitely want to be friends with Leah Stewart.

I had this realization in October 2010, when I gave a reading and visited a class at the University of Cincinnati, where Stewart is an associate professor of English and director of the creative writing program. Intelligent, funny, and down-to-earth, Stewart has written three well-received novels and been the recipient of a prestigious grant from the National Endowment for the Arts. The Northside resident is also a mother of two; she joined UC in 2007, when her younger child was just 2 months old. Her husband, Matt O’Keefe, is an editor at UC’s literary magazine, The Cincinnati Review.

Stewart is not a native Cincinnatian—born in 1973, she “grew up military,” as she puts it, and lived all over—but her latest novel is all about people who are. In The History of Us (Touchstone), Eloise Hempel is a Harvard history professor who, after the death of her sister and brother-in-law, returns home to the Clifton mansion where she grew up to raise her nephew and two nieces. Almost two decades later, the children are artsy twentysomethings trying to make their way in the world, and Eloise is sizing up her own life and considering a major change. The family members not only fight, drink too much, and embark on secret love affairs, they also eat sundaes at Graeter’s and sandwiches at Melt, listen to bands on Fountain Square, and make awkward confessions while sitting inside the vintage streetcar at Cincinnati Museum Center.

This fall, I spoke with Stewart about what it means to live and write in Cincinnati.

OK, if someone says to you, “What’s your new novel about?” what’s your summary?
It’s about people who didn’t quite do what they expected to do, and how you come to terms with the life that you ended up living.

Did you decide to write a novel set in Cincinnati and then create the characters, or was it the other way around? When did Cincinnati come into play as the location?
It was always there. I think the book was motivated by two things. One was a desire to write my own version of [George Eliot’s] Middlemarch, which, you know, I didn’t end up doing. But the other thing that motivated it was living here and thinking of it potentially as a permanent place to live. I started paying a lot of attention to other people’s relationship to the place. I was interested in the idea of people who come here and somehow feel like they are in exile in some way. At the same time, I had started to really love the city myself. So I was interested in the dynamic between coming to see what’s good about the place where you are living and continuing to feel like you’ve been displaced from where you should be. Those things came together.

My impression is that you grew up all over.
I grew up military—truly everywhere: Texas, Idaho, Virginia, New Mexico, Kansas, England. I went to college in Tennessee. My parents were in South Korea the first couple years I was in college. I went to grad school in Michigan, then moved to Massachusetts and then North Carolina. I’ve noticed I do this funny thing where I mention a place in one book and then I set the next book there. I’ve never done it on purpose. This is the first time I’ve written a book about a place where I still live. Usually I write about the place I’ve already left.

Is the Cincinnati in the book one hundred percent accurate? You describe this sandwich shop in Northside…
Well, that one’s real. That’s Melt. The thing that’s made up is Wyett College. It’s supposed to be a small liberal arts school.

It’s not UC with a different name?
No.

What was your reason for making up a school?
Eloise has such a sense of having ended up someplace that didn’t match her ambitions, that I thought I would make up a school rather than insult an existing school via Eloise. Her perception is that it’s a lesser school, that she could have done better. We don’t really know that Eloise’s perception of that school is accurate. I just wanted to let Eloise’s perception be there and not have somebody weighing it against an actual school.

My experience has been that, strangely, most people are so eager to see themselves or details from their lives in books that they’ll even see them when they’re not there.
I had a friend that I based a secondary character on in my second book. It was a completely positive portrayal or I wouldn’t have done it. But I totally forgot to tell her, and she was reading the book in bed one night and suddenly she was, like, “That’s me!” She’s hitting her husband to wake him up. “This is me, right?”

So is anything made up besides Wyett College?
I don’t think so. I got super into the “I’m going to capture the flavor of the city” thing at first, and then I had to pull back on that some. But one of the fun things that’s happened is that the people in the publishing house got really interested in Cincinnati from reading the book and they got the idea to have a hand-drawn map like they do in fantasy novels. My friend Alice, who is a visual artist, drew a little map with a little picture of the Museum Center and a tiny drawing of Fountain Square. So that will be in the front of the hardcover.

And Graeter’s?
I don’t think she put in Graeter’s. [Laughs]

Well you can’t have a Cincinnati novel without—
Mentioning Graeter’s, yeah.

I do think a lot of this book deals with Cincinnati’s self-identity. Some people love the city, some feel defensive about the fact that they live there.
When I first moved here we had been living in a small town for a year and in the country in North Carolina for eight years before that, so I was out of the habit of urban life. It just seemed really loud and dirty and there were sirens blaring. And also, Cincinnati has a lot of beautiful areas, but there is also a lot of urban blight. You can see that driving around in a way you don’t in Nashville or Austin or other cities. Right after we moved here, I just thought, I have brought my children to this dirty, crime-ridden, loud place. What have I done? And then, I don’t know exactly when, things began to change. I think there’s a sense of community here that I really like, and that was part of it.

How has that manifested itself?
Living in Northside, we ended up knowing our neighbors in a way that I hadn’t experienced. I think sometimes when you live in a place that has a kind of reputation for being cool or awesome—like, you live in Ann Arbor, you live in Cambridge, you live in New York City—people are pleased with themselves just because they live there. Whereas, if you’re in Cincinnati and you’re a Northside resident, there is a sense of bonding to the people around you because it’s not like you see yourself replicated over and over in the larger community. One of the things I’ve realized about living in the Midwest and living in a place where people don’t automatically feel pleased with themselves for living there is that people are more humble, you know what I mean? In a way that I like. There’s not a “too cool for school” [thing] going on here, even though there are a lot of people who have the outward markers of being cool or bohemian.

So, if you run into friends from graduate school and they say, “How’s Cincinnati?” what do you say?
I talk about all the kid stuff—the great parks, the zoo, the aquarium. I also talk about the architecture and the fact that these gorgeous old buildings were never torn down. Things like Music Hall. And now there’s all this urban revitalization, like the renovation of Washington Park, which is really cool. Every time I’ve gone down there I actually feel this strange dislocation because it’s like being in a park in a bigger city. People of all different socioeconomic levels and different backgrounds are there and it just feels really vibrant. And sort of inclusively urban in this great way that I don’t even think I felt when we first moved here.

You’re selling me on Cincinnati.
I’m like a booster now. [Laughs]

Have any of your books been optioned? Have there been any sort of movie-making possibilities?
My first book, Body of a Girl, was optioned by a couple people: an actress named Kathleen Robertson who started her career on Beverly Hills 90210 and by a writer-director named Michael Steinberg. I wrote versions of the script for both of them. They conceived it really differently: She wanted it to be an indie film and he wanted it to be a thriller. Obviously it didn’t get made, but that was kind of a fun experience ’cause they both flew me out [to the West Coast]. I’ve gotten, you know, the e-mails periodically that you refer to your agent. But never an option since that one. 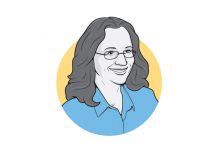