Home Sports Make It, Take It 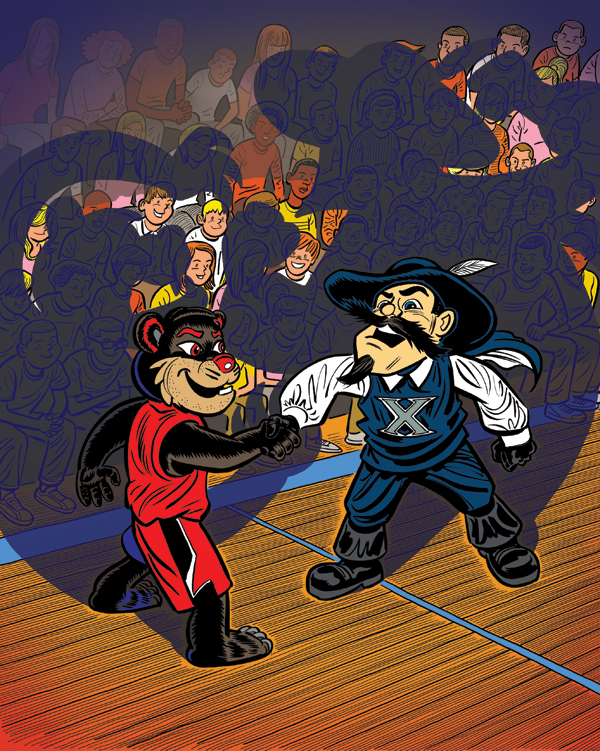 The whole ordeal started and ended with 9.4 seconds left on the clock. With the Xavier Musketeers leading 76–53 on their home court in the 2011 Crosstown Shootout, Ge’Lawn Guyn, a relatively anonymous freshman guard for the Cincinnati Bearcats, was standing face-to-face with Xavier guard Tu Holloway.

Words were exchanged, and what followed can only be described as ugly and embarrassing for all involved. Pushing. Shoving. Benches clearing onto the Cintas Center floor. Octavious Ellis and Mark Lyons throwing haymakers. UC’s Yancy Gates squaring up like a street fighter, urging Xavier players to come after him. XU’s Kenny Frease walking off the floor with his arms raised above his head, blood running down his face. And in the post-game press conference, Holloway bursting with enthusiasm about the melee.“We got a whole bunch of gangsters in the locker room,” he announced. “We went out there and zipped ’em up.”

Those 9.4 seconds never did come off the clock. The result on the scoreboard was no longer important.

The reaction among fans and media was swift and unequivocal. “This was a breakdown of epic proportions to allow [the rivalry] to get to this point,” says Lance McAlister, 700 WLW Sports Talk host. “It was a breakdown of the administrations, the facility, the security, the coaches, the players, and it led to an ugly statement about the city of Cincinnati’s two Division I basketball teams.”

Suspensions and punishments naturally followed for each team, though both programs eventually recovered and played their way to the NCAA Tournament’s Sweet Sixteen. The biggest issue in the aftermath became whether the game—first played in 1928 and at least once every year since 1945—should be kept on the schedule. Clearly, both schools have benefitted from stoking the rivalry over the years, so the decision was based on business and exposure as much as penalization.

“This game has been part of the landscape here in Cincinnati for years and years and years. We don’t feel it would have been a positive statement or an appropriate move to pull it off the docket,” says Xavier University athletic director Mike Bobinski. “[Both sides] felt that would have been surrendering to the lowest common denominator and basically throwing our hands up and saying ‘We can’t manage this’—which is absolutely untrue.”

Paul Daugherty, who wrote columns brimming with both indignation and insight about the brawl for The Cincinnati Enquirer, agrees—up to a point. “You can’t make the situation better if you end the situation,” he notes. “If you just stop playing the game, you’re not really achieving anything.”

True enough, which is in part why XU and UC appear to have bent over backwards to scrub clean the memory of last year’s debacle and start fresh. Maybe too fresh. We are the city that gave birth to brand management, after all, and in that grand tradition, this year’s contest has been fully rebranded.

At tip-off on December 19, fans will be witnessing a new-and-improved rivalry—the Skyline Chili Crosstown Classic (note the loss of Shootout); in a neutral venue (U.S. Bank Arena); with the National Underground Railroad Freedom Center receiving a portion of ticket sales (part of a two-year trial effort to incorporate The Banks and focus on the city as a whole). “Obviously, last year was something that neither school was proud of,” says Whit Babcock, athletic director for the University of Cincinnati. “It was time to change it up and rebrand it and celebrate all that’s good about the city.”

Change certainly is the order of the day, but support for the new modifications is not quite unanimous.

“I think it’s window dressing,” says Daugherty. He’s got other ideas about how to help heal the scars from last season. “I’d love to see the UC players and the Xavier players build a Habitat for Humanity house. I’d love for them get together on Thanksgiving or Christmas Eve and serve food or hand out presents, do that together. I think there are a lot of things that can be done to mend these fences…. I just think they haven’t taken it far enough.”

According to Bobinski, both teams will continue to consider joint activities in support of the game, all directed toward earning back the respect of fans throughout the area who have made the rivalry such a significant annual event, locally and nationally.

“So many of our alums, both from Xavier and Cincinnati, choose to make their lives here in our community and our region. They work with each other, they live in the same neighborhood, they go to the same church, so there’s a tremendous amount of interaction,” says Bobinski. “Athletics is one of those unique things that gives people a chance to rally around it. Because of that unique common experience, the game takes on that additional level of importance.”

He’s right. But healing—which, as New Age-y as it sounds, really gets to the heart of this matter—takes time and considerable effort. The general belief is that if the teams can mend the vibe surrounding the game, fans will not only continue supporting the rivalry but follow suit in terms of their own allegiance. Nobody wants the U.S. equivalent of a European soccer riot, of course, but it doesn’t change the fact that tensions do persist.

“There is a genuine dislike between the two places, and it surfaces at that basketball game,” says Daugherty. “I would hope that in the aftermath this has served as a reminder that this is just a basketball game, and we are, after all, one city. Let’s learn from this.”

Ultimately, the “one city” notion is what Bobinski and Babcock want the teams and the contest to embody. “In a perfect world, it should be a showcase of what Cincinnati is,” echoes McAlister. “If you market this beyond basketball into something that can be a feel-good for this city, I think that can be a winner. It should be a winner.”

And the result on the scoreboard will no longer be important.

Street Is Watching
ESPN 2 will carry a national broadcast of the Crosstown Classic at 7 p.m. on Dec. 19. The Bearcats lead the all-time series 48–31.

Couldn’t Get Much Worse
Was the brawl the most difficult incident Mike Bobinski has had to deal with at Xavier? “Unequivocally yes. There’s no question about that. It was the most emotional outpouring and reaction to any single set of circumstances in my 15 years by a significant distance.”

We Got Game
“If the nation is interested in Xavier versus UC just because of the fight, then we screwed up,” says Paul Daugherty. “If the nation cares, it should care because it’s a really good, competitive basketball game. It really is, in my opinion, the best city rivalry in college basketball.”

Camera-Worthy
“Nothing beats the view from the TV side of things when they show Skyline Chili and you get a shot of the city skyline and the bridge,” says Lance McAlister. “Maybe that night Paul Brown Stadium and Great American Ball Park are lit up. And that’s the way it should be.”