The full-length effort of singer-songwriter Cory Pavlinac, going under the moniker ZOO, has been years in the making. Pavlinac first began working on No Man’s Land shortly after he released his debut solo EP (his first ZOO project), Tree of Knowledge, in 2015. In between performing with the Cincinnati band Carriers and balancing life as a husband and father, the album came together bit by bit.

He started working on the project with friend and former Pomegranates member Isaac Karns. They recorded three songs, and initially Pavlinac was going to put them out as an EP, but then he recorded a few more songs and decided it was time for a full-length album, which comes out this Friday, Oct. 22.

“This particular record is kind of an amalgamation of many years and changes in my life,” he says. “I had a baby in 2017 and just had another baby a year ago, so I didn’t want to force anything. My project for ZOO has always been simmering in the background and I’ve been planning on releasing it for five years now, but it just took a long time to finish.” 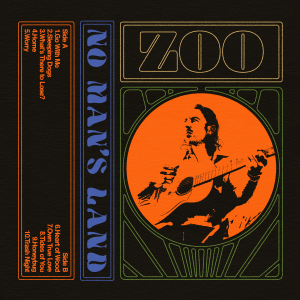 ZOO’s rollout for the record began earlier this year with “Sleeping Dogs,” a charged, Randy Newman-influenced track that was written in response to social and political divisions. The song, like many of the album’s cuts, was written a few years ago, but holds themes that are still relevant today. “That song stands out to me in a way because I was responding to something that was going on in the world, whereas a lot of the other songs on the album are more inward-looking,” Pavlinac explains.

Other standout tracks like “What’s There to Lose” and “Home” showcase his strengths as an introspective and poignant songwriter. As ZOO’s debut full-length project, No Man’s Land is also Pavlinac’s first official album as a solo artist, which meant learning to stand on his own as a singer and songwriter without the usual support from his bandmates.

“Writing a song and wondering if it’s subpar is a struggle for me,” he says. “I really rely on my friends and people that I trust to bounce ideas off of. It took a little bit more trust in myself to be able to do that with this album, but every time I release something new, I get more practice. Those feelings [of anxiety] are still there, but this is something that I want to do, so I push through it. And I’ve gained a lot more confidence in the past few years.”

That isn’t to say that Pavlinac didn’t get to work with his bandmates, and other friends, on the album’s musical side. Local artists like Knotts, Carriers’ Curt Kiser and more provided complimentary instrumentals and vocal harmonies.

“Most of the time I’d just be in the studio and someone would drop by, or you say, ‘Hey, come by,’ and something happens,” he says. “That’s kind of my favorite way for collaborations to unfold.”

“None of the songs on the album really feel like I was pushing them in any particular direction, but those are just the artists that are always in the top five of who I’m listening to,” he says. “The album is about isolation, loneliness, anxiety, but it’s also about rising above those things and finding beauty and hope in the midst of them. I hope it resonates with people and I’m happy to finally be putting it out in the world.”

ZOO will perform No Man’s Land at his Halloween album release show on Friday, Oct. 29 at MOTR Pub.