The yearlong celebration of 200 years of Jewish life in Cincinnati kicked off in September with theatrical and musical concerts, museum exhibitions about Jewish history and culture, artistic performances, and other events reflecting the community’s impact on the city. The centerpiece art program continues into January at the Skirball Museum in Clifton, and this month brings a lively Hanukkah event to Fountain Square.

The bicentennial program welcomes “anybody and everybody,” says Brant Schulz, communications project manager at the Jewish Federation of Cincinnati, which organized the program in partnership with multiple cultural organizations and corporate sponsors. “I really encourage people to come out and be open to the idea of experiencing one of the region’s most vibrant, inclusive, and exciting cultures that they may not have before.”

The opening of Chestnut Street Cemetery in the West End is generally considered the founding of Cincinnati’s Jewish community. In 1821, a Jewish immigrant passed away with wishes to be buried in accordance with cultural tradition, but there was no institution in Cincinnati to provide a proper burial. So the cemetery was established at Chestnut Street and Central Avenue, and today it remains the oldest Jewish cemetery west of the Allegheny Mountains.

The cemetery was rededicated on September 26 to formally begin the bicentennial program, which continues through October 2022. The ish Festival, an arts and cultural event, took place the same weekend at Washington Park in Over-the-Rhine and featured a concert by Matisyahu. It was created as a way to help “Jewish, Jew- ish, and culturally adjacent artists and artisans have a better platform to engage with the Cincinnati community,” says Marie Krulewitch-Browne, who serves on the bicentennial executive committee. “We were also interested in creating new and accessible entry points for Jewish and non-Jewish residents and visitors to engage with and explore Jewish and Israeli arts and culture.” 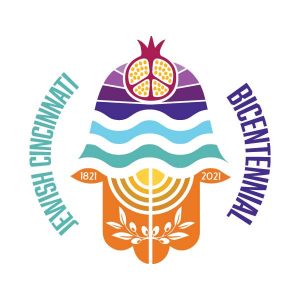 Krulewitch-Browne sees the celebration as a way to recognize significant historical milestones. “The city of Cincinnati and many of the institutions we know and love would look considerably different—and may not even exist at all—had it not been for the resilient and visionary Jewish immigrants who came here and decided to invest deeply into this community,” she says. Some of those institutions include the Fechheimer Brothers Company, which has been manufacturing uniforms for public safety workers since 1842; the founding of the first Jewish Hospital in the U.S. to provide healthcare for Jews but also people of every faith; the founding of Hebrew Union College; the establishment of Kahn’s Meat Packing in 1883; the founding of Syd Nathan’s King Records Studio; and the relocation of Macy’s headquarters to downtown Cincinnati.

Key bicentennial events currently taking place include A Portrait of Jewish Cincinnati: A Bicentennial Celebration at the Skirball Museum at Hebrew Union College, on display through January 30. Hanukkah will be celebrated December 5 at Fountain Square with ice skating, bumper cars, and a menorah lighting. “A Conversation with Eva Schloss,” a Holocaust survivor and the posthumous stepsister of Anne Frank, is at the Holocaust & Humanity Center at Union Terminal on January 26, marking the 77th anniversary of the liberation of Auschwitz. The Mayerson JCC Jewish & Israeli Film Festival will be hosted at various locations in February.

Schulz says the bicentennial program comes at an interesting time in history. “A lot of what is going on in the world is negative now, and there’s been a lot of upheaval for a variety of reasons,” he says. “We can finally, though, take the last 200 years and celebrate all the strides that have been made and all the wonderful accomplishments and contributions that Jewish members of Greater Cincinnati have made.”