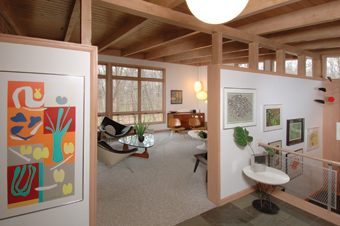 By the third or fourth real estate agent to whom Susan Rissover had to explain “mid-century Modern,” she knew she was destined not only to be a caretaker of her own Modern home but to champion all of them.

Meeting after meeting she’d describe the architecture style she and her husband, Arlen, sought: clean lines, open spaces, walls of windows, flat low-pitched roofs. And then the agent would cheerfully call up and urge them to drive by a “darling little house” on such-and-such street.

The couple eventually found the perfect home for their family of five in this 1956 Amberly Village bi-level, and Susan found her calling. Now a licensed real estate agent herself, Susan has become a nationally recognized expert on mid-century Modern architecture (quoted in Modernism Magazine and the Wall Street Journal), and she’s helping to educate a traditionally minded real estate community on the architectural value of these homes. With so many agents still out there who apologize for “dated” features in their mid-century listings or market these custom-designed homes as “teardowns,” Susan’s mission is clear: “My job as a Realtor is to try to get these houses in the hands of people who will really love them and take care of them.”

Few houses are more lovingly cared for than the Rissovers’ own home, designed and originally owned by architect Fred Pressler. And just to clarify: If you’re unsure about what constitutes mid-century Modern, this is it. With its low-pitched roof and organic, asymmetrical shape, the front of the house is nestled unobtrusively into the landscape—a hallmark of mid-century design. The back of the house is essentially a wall of windows that take advantage of dramatic wooded views. Inside, the lines and shapes are simple, with no ornate detailing or elaborate trim work, but with an unmistakable warmth of wood paneling, overhead beams and exposed brick.

Although the Rissovers knew instantly that they were buying a house with “good bones,” they had to overlook what they call “an unfortunate encounter with the ‘80s.” They removed their fair share of foil wallpaper and conventional brass light fixtures, and they repainted the Cape Cod-ish yellow and white exterior in shades of brown to blend in with the bark on the trees. But the most glaring transgression? The brick fireplace in the family room was assaulted with white crown molding and a terribly traditional set of brass doors. The Rissovers worked with designers from Dimensions DesignBuild to create the cascade of cherry wood shelves reminiscent of Frank Lloyd Wright’s Fallingwater. The bottom two shelves feature touch-latch front panels that open to reveal storage for TV components.

In the kitchen, Susan went all white, replacing the nondescript, non-Modern wood cabinetry that gave the kitchen a rustic cabin feel. She designed the seating area on the island in the free-form style that was typical of the era.

The house was also surprisingly lacking in many of the built-in features that characterize Modern homes, such as food prep centers to hook up blenders and grinders, intercom systems and bath fans. “It was short on that real Modern ‘bling,'” Susan notes. In the eight years since they purchased the house, the Rissovers have added the bling, brightening up a dark family room and hallway with skylights; building a deck off the master bedroom so inviting that even the deer have been known to stop and take in the view; and modernizing an out-of-place staircase banister with a can of stainless-steel spray paint.

Most recently, they redesigned the outside entryway to the house, restoring its 50s flair. The previous owners pulled out the original slate entry while doing some foundation work and replaced it with brick pavers-way too symmetrical for a mid-century home. After careful research into the materials and styles of the period, the Rissovers decided on large asymmetrical steps of exposed aggregate concrete, a material with a textured appeal from little rocks exposed on the surface.

“Sometimes you really have to stop and think about it,” Arlen says. “Our first instinct was stamped concrete, but we thought about it and that just wouldn’t be right [for the period of the home].”

Of course, much of the bling arrived with them on moving day. Since purchasing their first vintage piece in 1985—a George Nelson Ball Clock they bought for $1 at a rummage sale—the Rissovers have amassed an impressive collection of mid-century furnishings. From the trio of George Nelson Bubble Lamps in the living room, to the sizable collection of vintage Charley Harper prints throughout the house, to the 1950s sideboard they purchased from the Salvation Army for $25, the furnishings are as comfortable in the house as the Rissovers are. Contemporary furniture, they say, is a pre-requisite for the mid-century homeowner.

“You see so often a beautiful Modern home with totally traditional furniture,” Arlen laments. “The people who live there don’t seem to have a clue that they’re in a Modern design structure. They don’t seem to appreciate the style at all.”

The couple’s most prized possession is a pair of George Nelson Coconut Chairs that Susan discovered in the lobby of a phone company in Lafayette, Ind. Spotting them through the window as she drove past the building, Susan stopped the car and ran in for a closer look; it was 1985, and at this point she had only seen the classic chair in design books. As luck would have it, the company was redecorating, and new chairs were on order. They sold her the Coconut Chairs for a $25 donation to the American Heart Association.

“They’re definitely our signature pieces,” Susan says, noting that they have pictures of all three of their children—as well as a variety of assorted friends, relatives and pets—asleep in those chairs. “They’re comfortable, they look good, and I think they just really say what we’re all about.”

Don’t expect to drive by too many mid-century treasures today, though. The climate has changed dramatically in recent years; dealers quickly snatched up the bargains as Modern started to come back into vogue. Not too long after the Coconut Chairs coup, Arlen saw one on Ebay for $9,000. Commercials for everything from Target stores to allergy medications are now being filmed in Modern homes, and the Rissovers are often approached by companies looking for locations.

But mid-century Modern is not a fad for Susan. She remembers at 5 years old asking her mom to drive down a particular street so she could admire the cool houses. She’s also never worried about whether her pieces appreciate in value or about keeping them in mint condition; she’s simply surrounded herself with the pieces she loves—it’s about enjoying the design, not collecting it.

Now as a real estate agent, Susan is connecting with fellow Modernists and addressing the needs of homebuyers who, like her, don’t think these houses are dated. As a case in point, she had a listing last July that most agents would consider to be a challenge: a two-bedroom mid-century house in Amberley Village. Although she priced it higher than any two-bedroom had ever sold for in Amberley, she was still fielding calls from people wanting to make an offer two weeks after she had a contract on the house.

“If I had five or six of those houses I could have sold them for full price,” Susan recalls. “There is a demand [for Modern], you just have to market it to the right people and find the people who want it.” 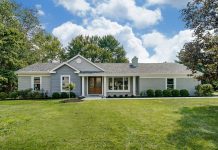 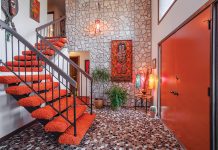 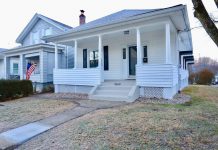