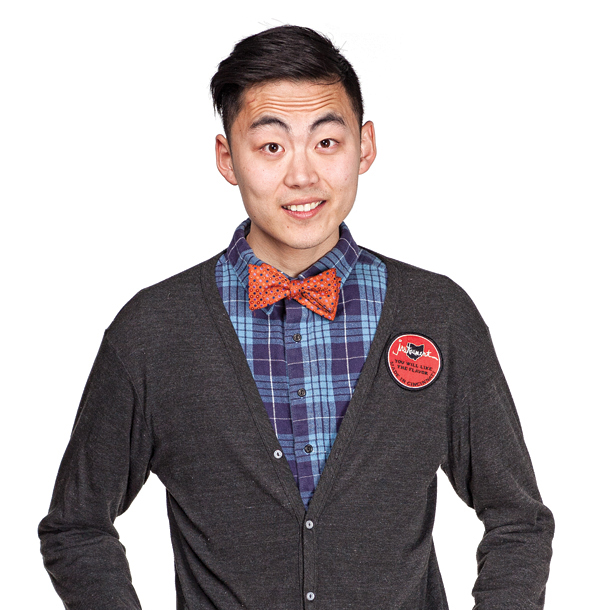 Lavomatic Sauté Chef Evan Scheller wears a bow tie while cooking. Skateboarding, too. With a large collection and maybe the quickest tying skills in the city, Scheller is a bona fide bow tie aficionado.

What’s with the bow ties? I like bow ties because they are something people don’t wear a lot anymore. I enjoy adding a little bit of clean-cut class to my outfits.

What do you have against a necktie? One, bow ties don’t get in the way, especially when I’m cooking. Two, not many people know how to tie a bow tie, so you sorta stand out.

When did you learn to tie one? I learned a long time ago. I was watching TV when I was kid and there was a J.C. Penney ad with bow ties. So I taught myself. I didn’t actually wear them much as a kid, but have started wearing them a lot as I’ve gotten older.

What made you start to wear them regularly? A couple years ago, I realized that I liked the way men used to dress and portray themselves back in the day, so I try to do that.

How many bow ties do you own? At one point I had 86 of them but I lost a few due to moving and such. I probably still have more than most people.

How quickly can you tie one? Let’s time it. [11 seconds later] Done!

Do you have a favorite? My purple Cremiux.

Bow ties have a formal connection. how do you make them more casual? Slap on some skinny jeans or put a on a cardigan. A true gentleman just makes it a part of everyday routine. Now if only I could grow a mustache.

Originally published in the April 2013 issue