Home News Salzano’s: Beyond a Shave and a Haircut 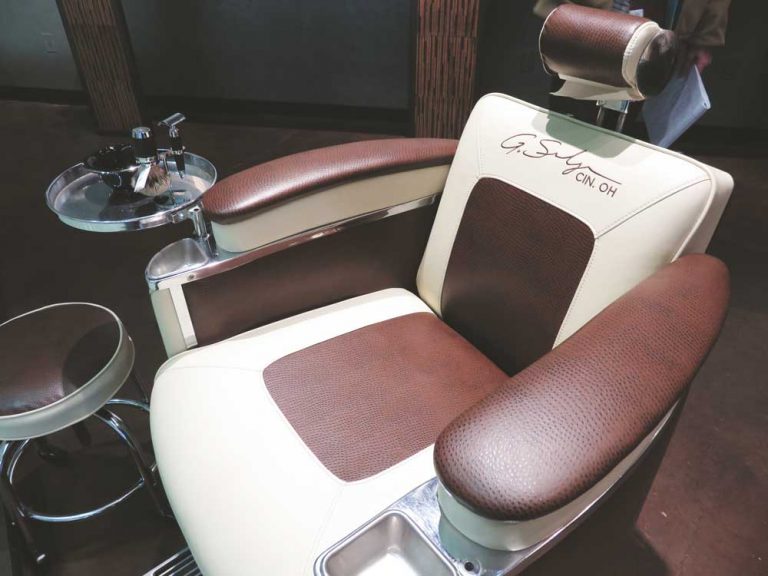 Retired barber Nick Salzano came to Cincinnati in 1956 from a small Italian town called Chiauci. Over the next 60-odd years, he and his family built a following among locals seeking a classic barbershop experience—specifically straight-blade razor shaves. A generation later, Nick’s son Guido is now using his own two decades of experience to operate G. Salzano’s Barbershop in the Atrium 1 building at 4th and Main streets. The centerpiece of the shop is the refurbished 1958 barber chair in which Guido received his first haircut (from his dad, naturally).

Just next door to the old-school chop shop is the G. Salzano’s store, featuring specialty shaving products from creams and soaps to safety razors and aftershave. “When you think of products, most people think of women. They go to the salon and buy products. Guys don’t do that as much,” said Guido. “But I want men to care about themselves like women do, and to have the products to do it.” The shop features a number of imports from Italy, Germany and London (it is, in fact, the only place in the city you can get London’s Taylor of Old Bond Street creams) as well as locally made products from Ohio Valley Beard Supply.

Guido also has plans to create his own G. Salzano’s line of products. Back when Nick was still in charge, he created his own aftershave that he would use on customers. Some loved it so much that they began asking to buy it, so he would bottle some up and sell it. Guido wants make his father’s creation a formal product.

Guido also hopes to host groomsmen parties, in which Salzano’s would provide food, a complimentary bottle of champagne, and anything else requested by the party (think specialty engraved razors or matching hairdos), plus, of course, a perfect shave.

But new plans aside, Guido and his brothers, Angelo and Domenico, want to just keep doing what they do best: cutting and shaving with passion and skill.

“Anything from a man’s shoulders up, we can handle,” says Guido. “We do it all and we do it great.”