No, he doesn’t want to go on Project Runway, and no, he doesn’t want his own company just yet. He wants to design alongside world-class talent, and a shrewd sense of next steps has gotten him well on his way. Madeira native Josh Stevens graduated from UC in 2007, where he took some courses in fine art and digital design, then saved up money, sold his car, and moved to New York City for a menswear degree from the Fashion Institute of Technology. On graduation day, he skipped the ceremony to start an internship at Theory, a high-end, contemporary clothing company. “I had an offer to join the Macy’s design team,” Stevens says, “and one to work for $35 a day at Theory—with this extraordinary designer from Paris named Oliver Theyskens. So it was: What trajectory do you want to shoot your career? The well-paid, stable route, or a more cutting-edge but risky one?”

At Theory, he learned how critical fit and construction are to good design, and he studied the early careers of the designers he most admired: John Galliano, Alexander McQueen, Stella McCartney, Hedi Slimane. Each had a tailoring apprenticeship, so Stevens knew his next step. Remembering Mike Trotta labels in some garments of family friends growing up, he contacted the Cincinnati tailor. “He’d never taken anyone on as an apprentice outside of his family,” says Stevens. “But I coaxed him a bit, and he agreed to let me train under him.” In 18 months with Trotta, he honed his understanding of how to put clothes together and how proportion and balance affect fit. “Before, I didn’t have an eye for the subtleties of fit, it was basically are the pants tight enough?” he says. Moonlighting at Saks gave him experience in selling to the customer he wants to design for.

After his time with Trotta, Stevens went to Central Saint Martins in London and the Institut Français de la Mode in Paris for summer courses in couture tailoring and advanced fashion design. Broke but with huge gains in his work, he came home, secured a tailoring job at Nordstrom, and focused on getting back to IFM—which is supported by  design houses like Chanel and Christian Dior.

He made the cut as a finalist for admission and set to work on a long jacket inspired by the Old St. George church fire in Clifton Heights—research involved burning wood to replicate the soot and shine and visiting cathedrals around town. He spent $410 shipping the jacket overseas, but it was worth it: He nabbed one of 10 spots—the first American in five years to do so—in IFM’s masters in fashion design program, which he starts this month. From there? “I’d like a creative role,” he says. “Proposing new ideas and setting a vision—with strong technical knowledge not leaving me at the mercy of others to translate my garment ideas into reality.” 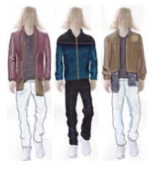 A Little Sketchy The concept sketch and jacket Stevens made for IFM—raw silk, with a woven leather sleeve detail. (Photograph by Joshua Deveraux)

In the Details “Get off the computer to do research,” he says. This handsewn embroidery is based on original art.

Common Threads His work (above, developed in London) has themes of rock and roll, nonchalance, elegance, and the poetic.

Originally published in the September 2014 issue.