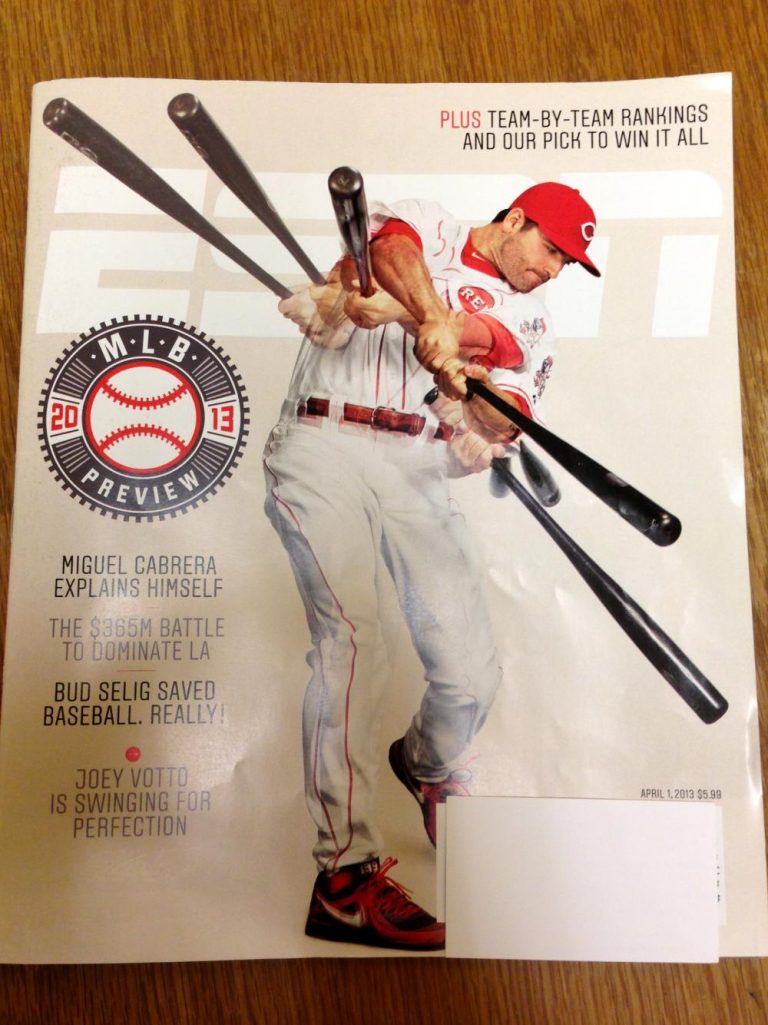 If you haven’t done so already, make it a point to check out Buster Olney’s cover piece on Joey Votto from the April 1 issue of ESPN the Magazine, on newsstands now. (The article is also available on ESPN Insider, if you subscribe/shell out the coin.) Olney is one of the top baseball writers out there, and he does an incredible job of delving into the hitter’s mind of Votto and what makes him so formidable at the plate, as well as so introverted and enigmatic off the field. I’ve always considered Votto to be incredibly boring (not that this is necessarily a bad thing), but the Olney piece has shifted my thinking a bit. It’s not that Votto is boring, but more that he’s a deeply inquisitive baseball player focusing so much energy and time to his craft that little to nothing else about him shines through to the fans and public. In other words, he’s a baseball nerd. And while it doesn’t make him as fun or exciting as someone like Brandon Phillips or Mat Latos or Jay Bruce, it is what makes him the best hitter in the majors.

This post is in no way meant as a substitute for reading Olney’s piece (because seriously, you should check it out, whether you’re a Reds fan or not), but I’ve pulled what I found to be the most interesting tidbits and revelations from the article, “Thinking Inside the Box.”

­-Votto took advantage of the opportunity to simply tell [Todd] Frazier he was sorry for not investing the time to get to know his teammate. “I take the blame for this,” Votto said. “I don’t know you that well, and I want to get to know you better.”…Votto doesn’t talk much in the clubhouse and always seems preoccupied. So Frazier saw an opening and took it. “Joe, since we’re speaking the truth here,” he said, “you’re a little different. But I respect you 10 times more for coming up and talking with me.”

This anecdote went a long way toward showing a glimpse of Votto’s personality and how he interacts with his teammates, but also to how his teammates view and interact with him. These are the clubhouse things that we as fans can’t glean from watching the games and reading the basic quotes/recaps afterward. Great bit of reporting by Olney.

-Using the advanced metric Adjusted OPS-plus, which takes a player’s OPS and adjusts for the ballpark and the league in which he plays, Votto rates as the offensive equal of Hank Aaron and Joe DiMaggio and is just a tick better than Frank Robinson.

-I mentioned to second basemen Brandon Phillips that I came to talk to Votto about hitting. Phillips laughed. “I hope you have a lot of time,” he said.

-When Cuban defector Aroldis Chapman joined the Reds for his first full season in 2011, it seemed wrong to Votto that he was unable to communicate with a pitcher integral to the team’s future… During the 2011 offseason, he worked with a Spanish tutor four or five times a week.

Similar to the Frazier anecdote, it’s an incredible peek into how much Votto values his relationships with his teammates. It also just perpetuates the stereotype of Canadians being the nicest people in the world. Too bad Votto didn’t offer Chappy any driving lessons though.

-He is a voracious reader. This spring, poring through metrics guru Nate Silver’s book, The Signal and the Noise, Votto noticed Silver making reference to Thinking, Fast and Slow, by Daniel Kahneman, a Nobel Prize winner in economics. Votto read that when he finished Silver’s book.

-When Votto is on the bench watching other hitters, Reds hitting coach Brook Jacoby has heard him predict pitch sequences, as if he is inside the head of the pitcher—not only the pitch type, but the location.

He’s like a Canadian Yoda with beard stubble and a propensity for hitting gappers with runners on base.

-Votto grew up in Toronto, the son of a chef and a sommelier.

-In fact, after Votto had spent six seasons in the minors, Cincinnati penciled in Scott Hatteberg to start at first base going into the 2008 season. Dusty Baker, the new Reds manager that spring, knew Votto’s reputation for being very quiet and rather odd—but Baker loved his swing, and soon he was starting.

Remember that, Reds fans, the next time you whine about Dusty’s lineup card on a random Wednesday in May.

-[Frazier:] “That’s why he’s the hitter he is. I wish I could take that approach. But for me, I’m just trying to relax as much as I can. Joey’s trying to speed it up.”

The most revelatory aspects of the piece were Olney revealing aspects of what make Votto not only a great hitter, but unique and unmatched in the way he approaches that facet of his game. From his pregame regimen, to how he varies his mindset based on the count, to how the passing of his father has impacted him at the plate, Olney’s insight is the best I’ve read on Votto since Jason Cohen’s interview in our August 2010 issue. (Self-promotion, sure, but Jason’s piece really is fantastic.) It’s no easy task living up to a $250 million contract, but if anyone can do it, it’s Votto. And be honest—you’d much rather watch him try it in Reds uniform than for some other club.