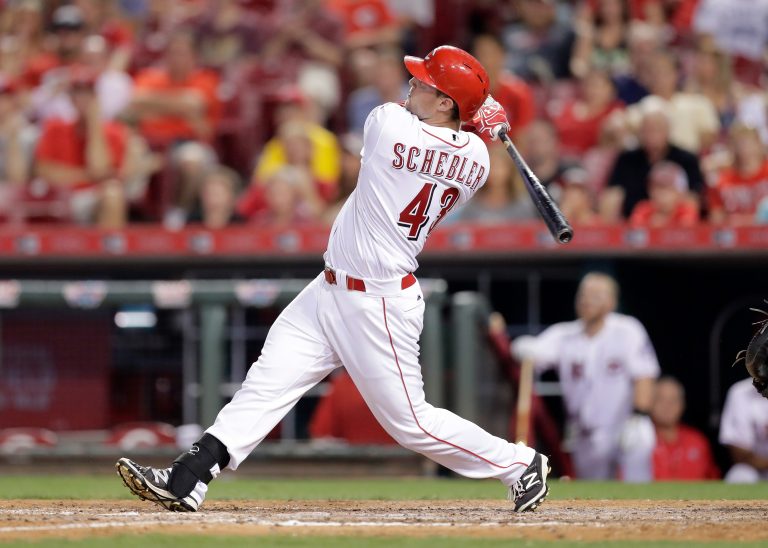 Confession time: before spring training, I was hopeful that Scott Schebler would be on the Cincinnati Reds bench by now. After just six weeks, I’m now wondering whether Schebler should be firmly in the middle of Cincinnati’s long-term plans.

Now, before you punch one of the “Share” buttons above to inform your mother about the dumb guy writing silly things in the digital pages of Cincinnati Magazine, permit me to clarify precisely what I mean by that. It’ll make sense, I promise!

Honestly, much of my pre-season opinion on Schebler had nothing at all to do with Schebler himself. You’ve probably heard of Jesse Winker. He’s been one of the top two prospects in the Reds organization over the last couple of years, a 23-year-old outfielder who has the reputation of being Joey Votto-lite (very, very lite), in the sense that he has a great command of the strike zone and will get on base at a high rate. You may also remember Winker from a brief, two at-bat stint with the Reds earlier this season, wherein Winker collected his first big league hit, a run-scoring double.

Winker is the first part of the equation here. I was hopeful that Winker would have earned a spot on the big league club by mid-May. After all, 2017 is a season for the Reds to determine which of the young guys are going to be in the longterm plans, and where the team will still have holes going forward. I’m ready to see if Winker can live up to his promise.

The other part of that equation is one Adam Duvall. Frankly, I’ve been saying for a while that I believe Schebler is a better longterm bet than Duvall (mostly because Schebler is two years younger than Duvall). But Duvall is now an officially sanctioned All-Star, and nearly a Gold Glove winner, too. The Reds aren’t just going to shuffle a guy like that out the door to make room for Winker. Nor should they.

So, if Winker were going to get a chance this season—and he’s really only capable of playing a corner outfield position, so replacing Billy Hamilton is out of the question—I figured it had to be at the expense of Schebler.

Schebler clearly didn’t like that idea, so he did what Scott Schebler does: mash the baseball with regularity.

This is coming on the heels of last season, when Schebler hit .265/.330/.432 for the Reds. But for Triple-A Louisville last year, you might recall Schebler posted a line of .311/.370/.564 with 13 home runs, 18 doubles, and 8 triples in 75 games. As we see Schebler’s power numbers improving in the big leagues (his ISO of .282 is at the high end of what he accomplished in his minor league career), you start to wonder if the real Scott Schebler isn’t making an appearance on the big league stage for the first time.

Did I mention that he’s just 26 years old? That’s not necessarily an elite prospect, but it’s still pretty exciting.

After all, Schebler had a bit of a pedigree before coming over to the Reds in the Todd Frazier trade. At one time, he was a top-ten prospect in the Dodgers organization, very athletic—he set high school track records in the 55-meter dash, the long jump, and the 800-meter relay, while also playing basketball, football, and soccer—with big-time power. By the time he reached the Reds, however, Schebler’s star had dimmed, thanks to a disastrous 2015 season in Triple-A, which saw him hit .241/.322/.410 with just 13 home runs.

As time goes on, it’s looking more and more like that 2015 season was an aberration, an outlier in Schebler’s career arc. His walk rate keeps going up, and his strikeout rate keeps going down. Schebler has seemingly developed into an above-average big league hitter, and if these gains in power prove to be real, the Reds could have…well, they could have another Adam Duvall-type, with better on-base ability. That’s a valuable player.

Meanwhile, Winker hasn’t been particularly outstanding thus far this season. He’s hitting just .288/.372/.364 for Louisville and, most troublesome, only has one home run. His power has disappeared, but Winker can still get on base with the best of them. I still expect Winker to be a valuable member of the next Reds team. And if he does end up being the hitter we hope he will be, the Reds have a problem on their hands. Who does he replace on the big league roster? I don’t know the answer to that.

But I really believe Schebler has the chance to be a late-blooming big leaguer, a guy like Chris Sabo or Todd Frazier than can put together a real career despite starting later than most MLB stars. I’m not quite ready to bet the ranch on that, but I don’t think it’s an unrealistic expectation, based upon what we’ve seen in Schebler’s career thus far.

Schebler, Duvall, Winker, Hamilton. There are a dozen different ways for this competition to play out—and some of those scenarios include other names (Aristides Aquino or Taylor Trammell, anyone?) As I noted when discussing the Eugenio Suarez/Nick Senzel competition, having too many good players is a great problem for the Reds to have.

But Schebler is firmly in that mix. As a matter of fact, he just may be the next Adam Duvall, and that ain’t a bad thing.