Home Sports Baseball Why the Reds Should Trade Adam Duvall 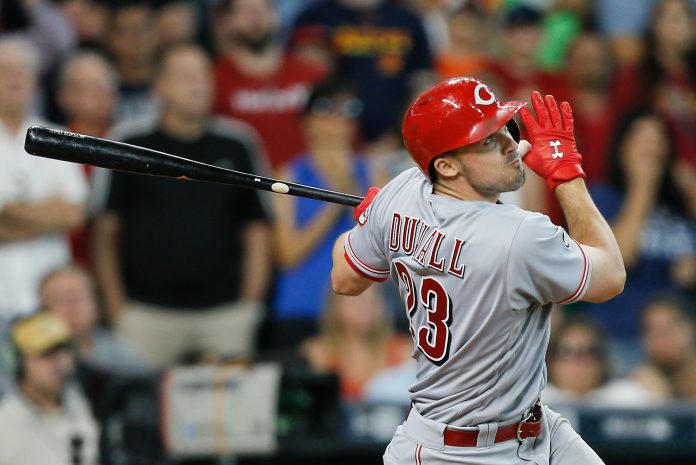 Time to strike while the iron is hot, Walt Jocketty. Or Dick Williams. Or Bob Castellini. Or Jim Bowden.

Whomever holds the conch in the Reds’ war room must be willing to engineer an unpopular move or two over the next nine days leading up to the trade deadline. If I may allow myself to step down from my soapbox for a brief moment, I am actually confident that the powers that be at 100 Joe Nuxhall Way will make the difficult but proper decision to trade Jay Bruce.

I am confident the Reds will pursue every avenue in shopping shortstop Zack Cozart in spite of what appears to be a thin buyer’s market at the position. (I guess the latest golden generation of shortstops just haaad to arrive at the same moment Cozart embarked on a career season.)

And yet, I am unconfident that the Reds will attempt to vigorously sell high on Adam Duvall.

A little over a year ago, Todd Frazier delighted a Cincinnati crowd and a national audience with a thrilling victory in the 2015 Home Run Derby. Frazier, always quick with a smile and by all accounts a superb public ambassador for the Reds, was seemingly on the rise to stardom.

And yet, the Reds should have been endeavoring to ship Frazier out of town before the smoke from the centerfield tall stacks at Great American Ball Park cleared on that exhilarating July night. Bruce and Aroldis Chapman should have joined the Toddfather on the way out, too.

A key tenet of a successful rebuild is striking while the iron is hot with respect to moving players who—whether it be because of age, a contract, the team’s timeline to win, etc.—will not be around to play on the next productive ball club a franchise features.

For this Reds Rebuild to find its highest ceiling, the power-holding minds in the organization cannot repeat the same mistakes (clinging to players past their Cincinnati expiration date) that they have over the past two seasons with Bruce, Chapman, Frazier, and Johnny Cueto.

The Reds—who were 13 games under .500 at the break, and needing to fully embrace the rebuild the franchise has since undertaken—chose to keep Frazier through the rest of the season. They followed the same protocol with Bruce and Chapman. After logging an .806 OPS in the first half of 2015, Bruce slumped to a .644 OPS in the second half. The Reds backed out of a trade that would have sent Bruce to the Mets at last year’s deadline, and they nearly traded Bruce to the Blue Jays in late February for pennies on the dollar before medical issues surrounding another player in the deal torpedoed the trade. The fact that Bruce has enjoyed a resurgence in 2016 and made himself perhaps the top position player on the market should not cloud the Reds’ previous bungling attempts to trade their longtime right fielder.

As for Chapman, no one (well, almost no one) could have foreseen the late October domestic incident the closer was involved in. But ask yourself this: was there any need for an all-world reliever on a squad 18 games out of first place on July 31?

Unless Duvall is a historical anomaly, his impressive power numbers are unsustainable.

“No player in baseball history with enough at-bats to qualify for the batting title has ever had an OPS that high (.849) with an on-base (.290) that low.” —Zach Buchanan, The Cincinnati Enquirer, July 5

And unfortunately for Duvall, his strikeout-to-walk rate is among the worst as far as National League regulars. Duvall’s penchant for punchouts and distaste for base on balls are two trends that fall in line with his major league career through 493 plate appearances, as well as his tenure in the minors (eight percent walk rate, 20 percent strikeout rate in 2,690 plate appearances)

Also, Duvall is sneaky old (in baseball terms), as he turns 28 in early September. And though Duvall made his MLB debut at age 25 back in 2014, he’s only accumulated the rough equivalent of one full season of plate appearances in the bigs. This factoid could mean that Duvall is a late bloomer, though the more likely scenario (as indicated by this study from Sons of Sam Horn) is that Duvall probably won’t enjoy a long, productive major league career.

There are risks in dealing Duvall, of course. Despite the Great Home Run Surge of 2016, power remains a scarce natural resource in baseball, and Duvall packs plenty of it—he is among the NL leaders in raw power—into his 6-1, 220-pound frame.

Also, the team acquiring Duvall would have him through two additional pre-arbitration years in 2017 and 2018 and under team control through the 2021 season. That’s a cheap, productive commodity to yield.

On the other hand, Triple-A outfielder Jesse Winker, the Reds’ top prospect and left fielder of the future, is damn near ready for his GABP close-up and will need to play everyday. If Bruce and Duvall wind up leaving town, Scott Schebler, acquired in the Frazier trade, deserves extended playing time. The Reds also need to see what they have in the enigmatic Yorman Rodriguez, a former five-tool prospect who has been hampered by injury in 2016.

Teams will be well aware of Duvall’s somewhat-fluky numbers, but the lure of player control for the foreseeable future could be enough to push a team over the edge—and it only takes one team. The Reds, who settled for underwhelming returns in the Chapman and Frazier swaps and came thisclose in doing the same for Bruce, need to be ready.