Fox News anchor, Elder High School graduate, and Cincinnati native Bill Hemmer will throw out the first pitch for the Reds this Saturday, July 12 before their game against the Pittsburgh Pirates. After finishing with Tuesday’s broadcast of his weekday show, America’s Newsroom, I chatted with Bill by phone in New York City about his nerves, the Big Red Machine, and which anchor would hit cleanup in the Fox News lineup. 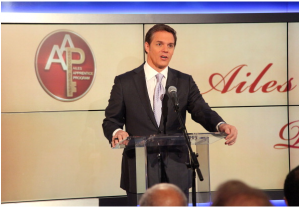 First thing, did you see that they put Votto back on the disabled list this morning?
What happened? Why did they do that?

I guess the quad injury is still bugging him.
No kidding, I hadn’t seen that. That’s a shame. They’ve been talking about him not being full strength for some time now.

On a lighter note, how did the first pitch come about?
I was home in March to do a speech for the Convention & Visitors Bureau, and I ran into Michael Anderson, the Reds public relations manager. So I asked him, How do you guys determine who throws out a first pitch? And he said, Why, you interested? And I said sure, if it works out for the team, and I would have to check with Fox, make sure it’s cool with them. So we came up with this Saturday.

I assume this is something you’ve wanted to do with Reds for a while now?
Yeah, but the thing is, it can be very nerve-racking. You only get one shot. And you’ve seen what some of the others have produced on that mound, and it’s not pretty. I did it a few years ago for Fox Fan Night at Citi Field, for the Mets. I’ll tell you, it’s the first thing you think about in the morning and it’s the last thing you think about before you go to bed, because you only get one shot and you want to make it count.

You still follow the team closely?
I follow them a lot. Technology has enabled us to do that. I’m probably a lot older than you, so I remember the Big Red Machine and my grandfather sitting out on his back deck with a transistor radio, listening to Marty Brennaman. We’ve gone from that to having the games on your phone now, and the MLB At-Bat app, which is fantastic. That enables me, obviously as a fan that does not live in town anymore, to stay pretty well connected. I will say though, man, this season started slow, and it was a bit of a grind. I feels like they’re starting to turn a little bit now. Five games back [at the time of the interview], which is great. Bryan Price was trying to figure out the job, I think. He’s a new manager, it’s a new style, different from Dusty. So maybe now is the time they’re starting to hit that groove.

I agree. Even living here in town, it almost felt like a chore earlier this season following them day-to-day.
Yeah, and as a fan, that gets frustrating. The last couple years, making the playoffs and going to the postseason and dropping that first playoff series. Oooof. As a fan you contribute seven months of your life to following them, and it’s one-and-done? So that can be tough. But I’m still a fan, always will be, and I’m very much looking forward to the experience on Saturday. It’s going to be a great night.

I saw a clip of your pitch at the Mets game. It was a little high, but you got it over the plate, which is better than the contrary.
The crazy thing about that was, there was a rain delay that night of about 45 minutes. Mother Nature was trying to ice me, clearly. But I was really pleased with the way it turned out.

I was impressed. People always talk about how it’s farther than you think, but you went out and threw it from the rubber.
Yes, you noticed that. A lot of people these days are stepping off, so you take your chances. Because that mound is what, 10 inches higher? So you’re stepping down, which throws off your natural rhythm. But a couple trips to the ball field to try and loosen up the arm, and hopefully the pitch will be fair and balanced, it will be right down the middle.

Do you feel like you learned anything from that first one you threw a couple years ago?
I think you need to leave it high. I think when you overthrow, that’s when you run into problems. I don’t need to be Chapman. This is not the German Missile out there. But if I leave it high, play it a little safe, I think I’ll be just fine.

You alluded to the famous Mark Mallory pitch before, which seems to loom over any first pitch in Cincinnati now.
Uh huh. Kinda hangs over him a little more than others. But I think what he did was really smart. He embraced the moment. Did Letterman, all that. I think that was the smart way to play it.

Are you more nervous for this one with it being in Cincinnati?
I’ll have some family at GABP, so maybe there is a little more added pressure. I would say that’s probably true. But I’m just looking forward to being out there. I’ve loved the stadium since it opened. Love the team, I’m a big fan. And just to get the opportunity to walk out there and be in your hometown, I think it’s quite an honor.

Who were the players you idolized growing up as a fan?
I mean Pete Rose, Johnny Bench—that’s Solomonic too. Wow. To be a young man and to be a fan, and to follow how good those players were and how good those teams were— we had no idea how lucky we were, until you start hitting these long stretches of time when your team doesn’t win. When you’re a longtime fan like that, you’re just hoping things turn around. Like 1990, nobody saw that coming. They go wire-to-wire the whole year, then sweep the World Series over a team that was so heavily favored to beat them in the Oakland A’s? That’s like lightning striking, and you’re never quite sure when it’s going to happen. And I guess in a lot of ways that’s why we’re fans, we’re waiting for that moment again. When it happens, it’s just a really great thing to be a part of.

So in a baseball game between the anchors from Fox News and the anchors from MSNBC, who comes out on top?
I just think you need to look at our lineup, brother. Top to bottom, you won’t find bigger names in cable news than here. That game is a blowout.

Where are you hitting in this lineup?
You know, that’s up to Roger Ailes. If I can bat second and get on base and get around a little bit, like Billy Hamilton, I’ll take it. If he needs me in the seven hole or the eight hole, maybe I can pick up the second half of the lineup. But O’Reilly is batting fourth for sure. Just ask him, he’ll tell you.