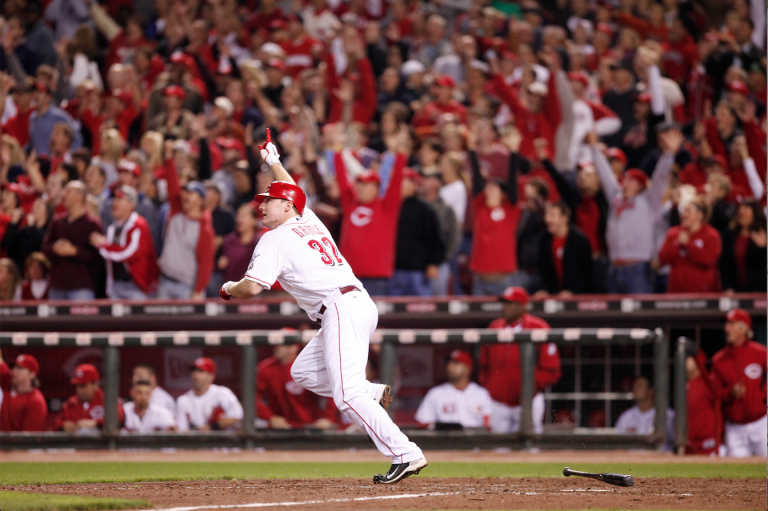 A little more than eight years ago, mid-June, I was in New York City, strolling happily toward Grand Central Terminal. I had been to NYC a couple of times before, but that evening was special. It was going to be the first—and only—time I would get to catch a game at Yankee Stadium. The old Yankee Stadium, before the antiseptic update.

New York is always a great experience but, for me, that day was even better than most. My wife and I jumped on the train to the Bronx, excited to see The House That Ruth Built. I was particularly excited that the opponent on that night was going to be the Cincinnati Reds.

But most of all, I simply couldn’t wait to watch the Reds’ new rookie right fielder. A kid who, just a few weeks earlier, I had written glowingly about over at Redleg Nation, in a piece entitled, “The Legend of Jay Bruce.” I had actually been writing about Bruce for a while, and anticipating his arrival in the big leagues, but this was going to be my first chance to watch him play, and he’d be manning the same right field grass as the Babe himself (not to mention Paul O’Neill).

And I wasn’t the only Reds fan who felt that way. All day long, I kept bumping into people wearing Reds gear around the city. From across the street, I’d hear someone yell to me: “Go Reds!” I saw no fewer than ten people—on the mean streets of New York—wearing Reds shirseys with “Bruce 32” on the back.

How had they gotten those shirts so quickly? Bruce had only been in the big leagues for a month!

Maybe this wasn’t a legend being born, but it was certainly the beginning of a special career for a player that was destined to make his mark on Cincinnati sports history.

Nearly six years ago, I settled into my seat in the moon deck at Great American Ballpark, my scorebook in one hand and a drink in the other. It would be almost an hour until the first pitch was thrown, but there was already an electricity in the air unlike anything I had ever felt at GAPB.

That fact wasn’t particularly surprising. On the heels of nine consecutive losing seasons, the young and exciting Redlegs had broken through that year, and on that cool September night, Cincinnati held a six game lead over the second place Cardinals with just six games left to play. The moment we had been dreaming about was upon us, though none of us dared to dream about what was actually in store.

Just before 7:10 p.m., the first-place Reds emerged from the dugout and ran to their defensive positions. Just below my seat, in right field, was the 23-year-old slugger Jay Bruce, in the midst of his breakout season. When the dust settled on that memorable 2010 campaign, Bruce had hit .281/.353/.493 with 25 homers.

More importantly, Bruce was part of a youth movement that had put the Reds in position to make the playoffs for the first time in fifteen years. The game that night was tense from the very beginning. Cincinnati scored a single run in the bottom of the first off Houston starter Wandy Rodriguez, thanks to a throwing error by Astros third baseman Chris Johnson. The ‘Stros struck back against Edinson Volquez the following inning, thanks to three singles and two bunts. (Houston manager Brad Mills loved the ol’ bunt.)

The Reds tied it up thanks to a Brandon Phillips infield single in the sixth, and the score remained tied 2-2 as Bruce strode confidently to the plate to lead off the bottom of the ninth.

Most of the 30,151 Reds fans in attendance rose to their feet, either out of hope or anticipation of what was to come. Bruce settled into the box against Tim Byrdak, took a couple of practice swings, then reached his left hand back toward the catcher.

You know that move. Reaching his hand straight back just before the pitcher began his windup. Jay does it every pitch, just loosening up that sleeve a little so he can unleash another powerful swing. How many times have we seen that over the years? How many kids have imitated that little move in backyard Wiffle ball games? Both of my kids have; my daughter actually does it subconsciously in her softball games sometimes when her sleeve is bothering her at the plate. I notice—and get a kick out of it—every single time.

Moments later, Bruce delivered a walkoff home run to center field and the Reds were National League Central division champions. Clinchmas. Everyone, myself included, erupted into pandemonium. No one wanted to leave the park. It was an amazing night, courtesy of Jay Bruce.

Five years ago, I signed up my son Casey for Jay Bruce Baseball Camp. I wasn’t expecting a lot, but we had a few free days, and it seemed like it would be fun for him. As it turned out, the camp was a well-run affair, with appearances by Bruce and some of his teammates, like Scott Rolen and Drew Stubbs, and instruction from a number of local college and high school coaches.

Bruce didn’t just make an appearance like the other players, however. Jay’s name was on the camp, and he seemed to take that obligation pretty seriously. He was there all day, every day, mostly providing encouragement to the kids, taking pictures with them, having fun. I’m not sure I’ve ever seen anyone smile as much as Bruce did during that camp, and it certainly seemed like he was genuinely enjoying himself with the young players. (And I used to be a politician, so I feel like I have a pretty good radar for fake smiles.)

On the final day of the camp, all the players had been split up into teams and were playing each other. Bruce went from field to field, pitching for a little while in each game and interacting with the players. Eventually, he made his way to the field where my son was playing.

Casey has mostly played second base since he began playing baseball, but they had him at first base on this day. With Bruce pitching, a ball was hit into the hole between first and second. Casey made a play on the ball and tossed it to Bruce, who was covering first.

Now, in all honestly, it wasn’t some spectacular play. Casey was seven years old—that day was actually his birthday—and just catching a grounder is difficult enough at that age. But Jay Bruce ran over, draped his arm around my son’s shoulder, and made Casey feel like he had just made the most amazing play in the history of the game.

I saw Bruce repeat that act with a number of the campers that week, and I was continually impressed at what a good guy he seemed to be, and completely genuine. Maybe it was an act. You never know with professional athletes. But if you speak to anyone associated with the Reds over the last decade, they’ll tell you: that’s just who Jay Bruce is.

That day, when Bruce put his arm around his shoulder on his birthday, that was the very moment that my son fell in love with baseball, and with Reds baseball in particular. To this day, you had better not say anything critical of Jay Bruce around him. Casey won’t stand for it.

After that walkoff home run in 2010, Bruce finally became the player everyone had hoped to see when he was drafted in the first round of the 2005 amateur draft. Over the next three seasons, Bruce would average 32 home runs and 102 RBI per year. He would be named to two National League All-Star teams, win two Silver Slugger awards, and twice finish in the top ten of the NL Most Valuable Player award balloting. Jay Bruce was a certified star.

Then he got hurt. And he suffered through a couple of difficult seasons. And his star dimmed a bit.

But this season—still only 29 years-old!—the old Jay Bruce returned with a vengeance. By the end of July, Bruce had 25 home runs, and was leading the National League with 80 runs batted in, all while hitting .265/.316/.559. He made his third All-Star team.

It has been the best season of Bruce’s career to this point, and for those of us who have always been fans of the guy, it provided a hope that he would continue to produce well into his thirties.

Jay Bruce was back.

And then he was gone.

Two days ago, Jay Bruce was traded to the New York Mets. It was not an unexpected trade, and though I continued to hold out irrational hope until the very end that the Reds would figure out some way to keep him in Cincinnati, there’s a good argument to be made that it was the right decision for the franchise.

But that doesn’t make it hurt any less. I hate this trade, despise it as badly as any trade the Reds have ever made. And not because it was a poor decision by Reds’ management.

No, I hate it because Jay was our guy, drafted by the Reds, developed by the Reds, a star for the Reds. He has been the epitome of what any franchise would want, a productive star who went about his business with a smile on his face, making friends everywhere he went. A genuinely good guy that the fans could be proud to root for.

Over eight-plus seasons with the Reds, Bruce hit 233 home runs, good for seventh on the franchise’s all-time list. No player has hit more home runs at Great American Ball Park. One day, he will be elected to the Reds Hall of Fame.

Jay Bruce has a lot of playing left to do, and I’ll be rooting for him until the bitter end. But one day, when I’m old and gray and my son is all grown up, the Reds will schedule a ceremony to celebrate Bruce’s induction into the team Hall of Fame. And I’ll make that trip, with Casey. We’ll enjoy talking about Clinchmas, and all the other incredible highlights of Bruce’s Reds career.

And we’ll remember a birthday from years before, when Jay Bruce made a fan for life. Two fans for life, actually. Father and son.