Home Sports Baseball Homer Bailey is back. And a bit peeved. 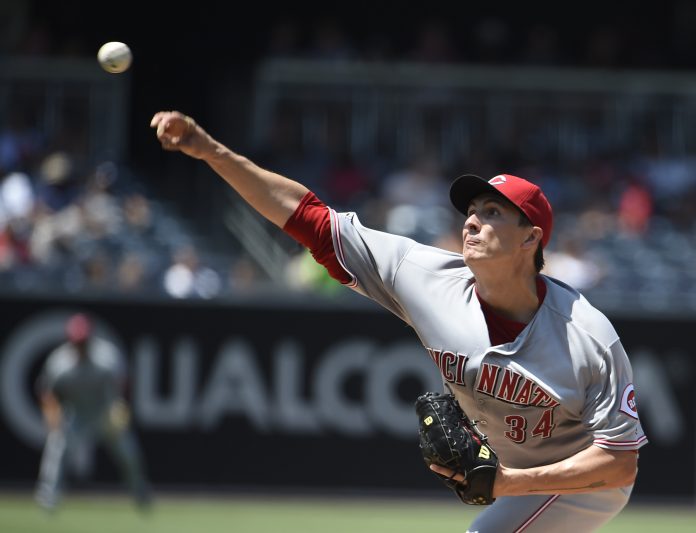 “One of the things I asked was, ‘Where are we going? What are we trying to do here?’ If it’s a thing where we’re sneaking in at third place with a very talented team, I don’t want to be a part of that. I want to be part of something that’s winning divisions and going deep in the playoffs and competitive every year. Just talking with [Bryan Price], it seems like that’s the goal of this organization. That says a lot.” — Homer Bailey, after inking a six-year, $105 million contract on February 19, 2014.

Prior to Sunday, Bailey’s last start in the majors was on April 23, 2015. The Reds lost Bailey’s start that day—the immortal Kevin Gregg was charged with the blown save—to drop to 8-8 on the season. Since then, the Reds have prevailed in 39 percent of their 252 games and spent a grand total of 14 days with a winning record. The club has also shipped out Jay Bruce, Aroldis Chapman, Johnny Cueto, Todd Frazier, and Mike Leake since then. Cincinnati attempted to move Brandon Phillips on (at least) two occasions and were purportedly seconds away from shipping out Zack Cozart at Monday’s trade deadline.

“I think I see the plan. They talked about us losing 100 games at the beginning of the year, and shit, we’re damn sure trying, aren’t we?” — Bailey, after the Reds traded Bruce to the Mets on Monday.

If Bailey failed to calculate the payroll math or do the necessary organizational homework before he inked the deal that will provide his family with generational wealth, that’s on him. It’s also not Bailey nor Price’s fault that the Reds decided against pursuing substantial upgrades to the 2014 or 2015 teams seemingly the second the ink dried on Bailey’s new contract. And no one bears the blame for the injuries that decimated any realistic chance at contention during those seasons, either.

In any case, when Bailey—who served as the Reds’ Great Right-Handed Hope nearly a decade ago—took the mound at Petco Park on Sunday for his first post-Tommy John surgery start, a relic from a bygone era was inserted into the Rebuilding Reds.

Bailey’s first ‘healthy’ start in two years was deeply encouraging; at one point he retired 14 straight Padres. He struck out the side in the fourth inning and was still pumping mid-90 mph heaters in the sixth inning. On the downside, Bailey would do well to to re-engage himself with the more nuanced parts of the game—he allowed four stolen bases, including the easiest steal of home you’ll ever see.

The 30-year-old Bailey appears healthy, but the real question is, with at least three years and $68 million left on his contract after this season, where does he fit into the Reds future?

Bailey could become a Gandalf-esque presence for the Reds next generation—an elder in the Fellowship of the Rebuild, if you will—serving as an experienced figure who instructs Cincinnati’s young talent on the ins and outs of the game—and hopefully the art of the hilarious postgame interview.

When Bailey was in his early 20s, he was what Reds fans hope Anthony DeSclafani, Amir Garrett, Raisel Iglesias, Michael Lorenzen, Jose Peraza, Cody Reed, Robert Stephenson, Eugenio Suarez, Jesse Winker, and the newly-acquired Dilson Herrera will be to the franchise in the coming seasons: a crucial piece of a year-to-year playoff contender.

When the Reds decided to hand Bailey the largest pitching contract in club history, they were banking on recent gains and future performance—and not his mostly underwhelming and injury-riddled period from 2007-11. Bailey was coming off his best seasons in 2012 and 2013, a two-year stretch where he threw 417 innings and was among the National League’s best starting pitchers in strikeout-to-walk rate and adjusted run prevention. Then, Bailey pitched hurt for most of 2014 and lasted two starts in 2015 before his right elbow needed a surgical graft.

Oddly, for someone whose career leaves a bit more to be desired given that he was the seventh overall pick of the 2004 draft, Bailey does possess some incredible highs in his career; he’s one of 31 pitchers in baseball history to throw at least two no-hitters, and he logged seven innings of one-run, 10-strikeout ball in Game 3 of the 2012 National League Division Series, by far the most important and high-pressure start of his career.

Fast-forward to present day: with Bruce gone, Bailey joins Phillips and Joey Votto as the lone remaining Reds from the magical 2010 team. Perhaps this comeback from reconstructive elbow surgery can provide Reds fans with a welcome shot of the feelz in the midst of a trying rebuilding campaign. Going forward though, it will be interesting to see if Bailey can make good on that historic contract—it’s not out of the question—or maybe more important (and realistic), get back to simply being a healthy, productive member of the starting rotation and embrace that role of pitching patriarch for a staff of young guns. It’s clearly not a plan he prefers, but right now, it’s all the Reds have.

—
Grant Freking writes for Redleg Nation, Land-Grant Holy Land, and is a regular contributor to Cincinnati Magazine. You can follow him on Twitter at @GrantFreking.