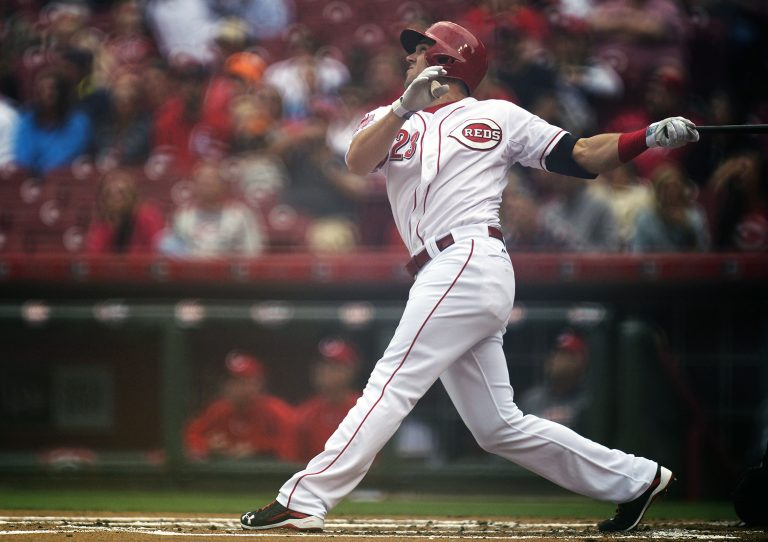 By now, you probably already know that Reds left fielder Adam Duvall was named to the 2016 National League All-Star team.

The Reds had three legitimate candidates—Jay Bruce and Zack Cozart were the others—but the selection of Duvall wasn’t particularly surprising. After all, the big guy has 22 home runs, which is fourth-best in all of baseball, and his 59 RBI are among the top five in the National League. Those are numbers that would traditionally merit inclusion on the All-Star team.

Sure, Bruce’s numbers were better overall, and Cozart has been one of the top two or three shortstops in the league all season. But Duvall is a valid choice. It’s just unfortunate that the Reds are so bad that it was a foregone conclusion that the club would only get one player on the roster.

Let us forget for a second, if we can, the names of players who might’ve been snubbed. Whatever the reason he was selected, Adam Duvall being a National League All-Star is such a fun story. Honestly, it’s stuff like this that makes me love baseball. (And I do love baseball; after all, I continue to write about a Reds team that is on pace to lose 103 games. My bona fides have been established.)

Think about it: Duvall might be the most unlikely Reds All-Star in the history of the franchise. As I wrote a couple of months ago, when he was acquired by Cincinnati, Duvall was just a throw-in, an added piece to a deadline deal:

Last July, the Reds traded soon-to-be free agent pitcher Mike Leake to San Francisco in exchange for 21-year-old right-hander Keury Mella. Mella (and his blazing, mid-90s fastball) was ranked as the top pitching prospect in the Giants organization by various publications in the business of making such rankings.

In essence, the Reds were trading a couple months of Leake for a young pitcher with a lot of upside. Good deal, right?

From failed third baseman to surprise winner of Cincinnati’s left field sweepstakes to National League All-Star, all in the span of less than one year. What a whirlwind ride for a kid from Louisville, Kentucky.

Here’s another reason I love this story: Duvall is among some great company in Reds history. After he was named to the All-Star team, I started wondering how many Reds had been named to an All-Star roster with fewer MLB games under their belt than Duvall’s 134. With the help of stat genius and all-around great guy Joel Luckhaupt (go follow him on Twitter), I came up with the following list of Reds position players at the time of their first All-Star selection.

That’s some kind of list. It’s a group of Cincinnati Reds legends, honestly. Other than Duvall, every player here is a Reds Hall-of-Famer (or, in the case of Adam Dunn, destined to be one when he becomes eligible). Two of these guys have been inducted into Cooperstown.

So let’s go ahead and say it: Adam Duvall is destined to be a Cincinnati Reds Hall-of-Famer. Congrats, Adam!

Okay, maybe not. Most of these guys on the list were breakout stars in their early-twenties. Players who make the All-Star team at age-22 or younger are generally the guys who put together long, productive careers.

Duvall is 27, so the only player on this list who is kinda, sorta comparable is Chris Sabo. Sabo—or as teenage Chad knew him, “Spuds”—stole the starting third base job from Buddy Bell in 1988 and was immediately a breakout player, winning Rookie of the Year. He would go on to make three All-Star teams, and the first four years of his career (through age 29) were quite productive: .278/.335/.456, 117 adjusted OPS+.

As he reached age 30, however, Sabo started declining. It’s a typical story for players who debut in their late 20s: his prime years were good, but it wasn’t a lengthy career. Sabo lasted only nine seasons in the big leagues but, to his credit, they were particularly memorable. A World Series ring, three All-Star Games, Rookie of the Year, and inducted into the team Hall of Fame. Most players would be ecstatic with a career like that.

I’m certainly not convinced that Duvall can reach anywhere near the heights Sabo reached (and let’s not even discuss Robinson or Bench). Duvall is killing the ball this year, with those 22 home runs to go along with 20 doubles (and just 29 singles). However, as Zach Buchanan noted, no player has ever posted an OPS of at least .849 while having an on-base percentage as low as Duvall’s. Never. It’s never happened before.

Perhaps Duvall will be able to sustain this performance over the long haul. If he does, he’ll be a unique player in baseball history. I’m not going to bet the ranch on that, though I do think he can be a nice little player for the Reds over the next few years.

But who cares about what the rest of his career is going to look like? Duvall is doing exciting things right now, at this very moment, and he came out of nowhere to earn a spot on the National League All-Star team. He’s likely to be a participant in the Home Run Derby, and I doubt any player in San Diego next week will be having more fun than Adam Duvall.

It’s a story worth celebrating, in a Reds season where those have been few and far between.