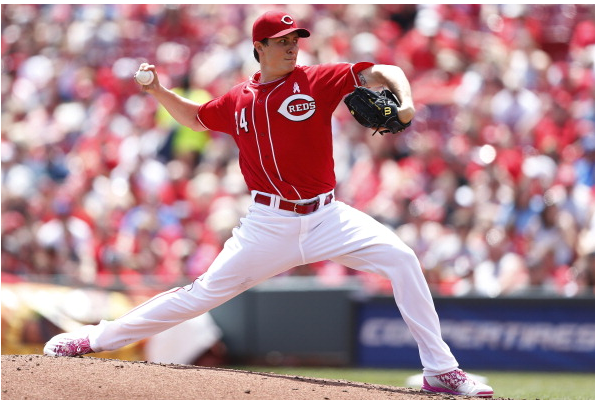 I have purchased a cane, started abusing prescription meds and started verbally abusing my editors. I’ve pumped opera jams in my walkman and ordered newbies to fetch me a cafe latte with a twist of lemon. Hell, I’ve even grown to accept that time is indeed a flat circle—all in an effort to diagnose what’s wrong with yet another struggling player. Today’s case? Mr. David Dewitt Bailey Jr., better known as Homer.

Bailey’s case is not particularly unique. He’s been coming into this office off-and-on for years, expressing similar patterns of uneven behavior and delivering similarly frustrating results. A pitcher with a great fastball and as much natural ability as Bailey possesses is a valuable commodity; that’s why it wasn’t big news that the Reds gave the 28-year old a $105-million extension this offseason. One of the drawbacks for fastball pitchers though is that when their control or velocity wavers even slightly, their out pitch suddenly becomes quite hittable.

Bailey’s 2014 numbers look ugly on the surface. Heading into this Friday’s start against St. Louis, Bailey has a 5.44 ERA and a 1.58 WHIP, a drastic difference from last year’s line of 3.49 ERA and 0.86 WHIP. But beneath that bumpy exterior lies a…well…a bumpy sub-layer.

Let’s take a look at the first symptom, the strikeout-to-walk rate. Bailey, a fastball pitcher, should have his strikeout-to-walk ratio (K/BB) number above 3.00 to maintain a healthy start. Breaking ball or sinker ball pitchers tend to find some leniency in regards to BB/K ratio because they don’t rely on strikeouts heavily and their pitches are often more difficult to locate (not to mention more often aimed out of the strike zone.) Last year, Bailey’s K/BB was solid at 3.69, 18th best in the majors. But this year, that number has slipped to 2.56, which would have put him just out of the top 50 last year. The fall is not a result of a dramatic rise in walks or fall in strikeouts; it’s a combination of slight fluctuations in both. Bailey’s K/9 is down from 8.57 in 2013 to 8.06 in 2014, while his BB/9 is up from 2.33 to 3.16. Which poses the next question: what is causing the slight fluctuations?

In order further examine this malady, I analyzed Bailey’s pitch location and how batters were reacting. Turns out, it’s a little weird. His Zone Percentage is actually up 5 points from 2013 to 49%, meaning that he’s throwing more balls for strikes. So at least he’s not wild. Against pitches outside the zone from Bailey though, batters are only swinging 29.9% of the time. BUT, when they do swing, they are contacting the ball far less than they normally do, which flies in the face of logic when considering the other two numbers. (Instead of fighting the logic, let’s all just sing the small sample size song. )

I do think the numbers suggest that perhaps for reasons beyond my knowledge, batters are seeing the ball a little bit better coming out Bailey’s hand this year. That is not exactly a positive for Homer or the Reds, but it’s also a correctable one for a pitcher who has maintained a successful delivery in the past (which Bailey has). Perhaps a slight change in release point or arm slot could bring Bailey come back to normal.

The home run situation, however, coupled with a few other numbers, paint the picture of a terribly unlucky pitcher. (Which is good news if you were worried about all that “zone” nonsense.) His home run-to-fly ball ratio is bananas, with 18.4% of his fly balls turning into home runs. Typically, that number hovers around 10%. The counter argument is that someone who throws hard like Bailey is more apt to give up home runs. (Faster the pitch, farther the ball flies. Take THAT, high school physics teacher.) But that doesn’t explain a departure this far from the norm. That number will fall, as will his absurd BABIP numbers. This year, batters are hitting .348 on balls in-play against Bailey, which is significantly more than the .296 league average. That number could be worrisome if, say, his line drive percentage had raised considerably, but that has actually dropped slightly, while his ground ball rate has gone up and his fly ball rate has dropped. All of these are good things, despite the fact that balls are still finding their way out of the ballpark. Lefties have posted a .409 BABIP this year to go along with a 1.055 OPS. This is the luck equivalent of SNL having Tina Fey as a cast member when Sarah Palin was a notable political figure, except the exact opposite. Most likely, these numbers will come down to earth and he will be fine.

The last symptom that warrants at least a passing mention is his inconsistent outings. In 32 starts last year, Bailey had only one in which he pitched less than five innings, and in 24 of 32 he pitched at least six innings. This year, Bailey has been yanked twice before completing five innings of work and already has four games in which he hasn’t lasted six innings. (Guess that’s what an excessive number of home runs allowed will do to a guy.) Though this isn’t nearly as concerning when you consider that notorious arm endanger-er Dusty Baker is no longer calling the shots. (Hopefully new manager Bryan Price didn’t pick up any of those ol’ Dusty tricks.)

Final Diagnosis: Bailey will be fine. His xFIP, which attempts to adjust an ERA based on a number of different factors that ultimately show what the figure should be (3.64), is right on target of his career average at 3.66. And among qualified pitchers, he has the third biggest positive difference between xFIP and ERA. He may not match last year’s consistency, but he should have much better luck moving forward. Now go eat some guava pastries and be merry.