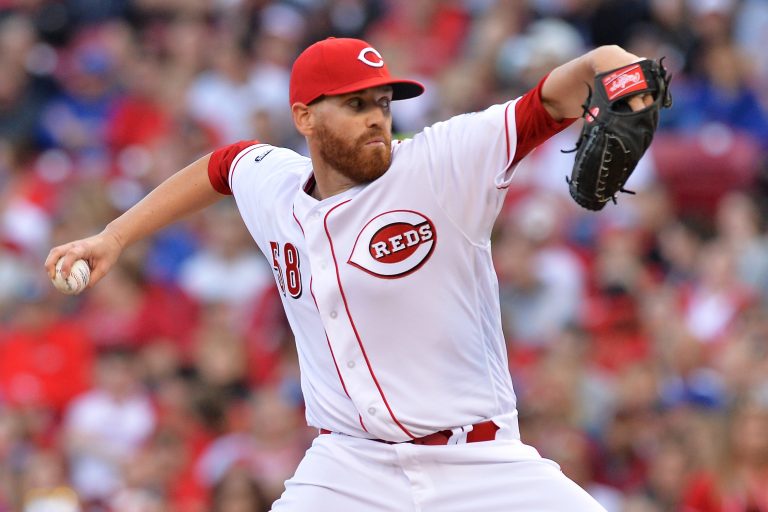 After spending all of spring training with the Houston Astros, right-hander Dan Straily was abruptly traded to the San Diego Padres on March 28. In return, the Astronomicals received a 35-year-old catcher.

Three days later, the Padres placed Straily on waivers; they didn’t necessarily want to lose the 27-year-old hurler, but Straily was out of options. He wasn’t going to make San Diego’s Opening Day roster, so the club thought they might be able to sneak him through waivers, then send him to AAA when he wasn’t claimed.

But he did get claimed off waivers, by the Reds. According to beat writer Zach Buchanan, no one from the Cincinnati front office or coaching staff had seen Straily pitch live. The team needed pitchers, and Straily qualified on that front. Plus, he was cheap.

In less than a week, Dan Straily and his sweet red beard had been a member of three organizations. When the dust settled, he was named to the Reds’ Opening Day roster—without having made a single appearance for the team in spring training.

As many noted at the time, it was a reasonable gamble to take. Though Straily’s recent track record wasn’t great, there was a time when he was considered a good prospect. Drafted by Oakland in the 24th round (in 2009), he used impressive strikeout rates to push his way to the majors, making his debut as a 23-year-old in 2012. The following year, Straily put together a solid rookie season for the A’s, going 10-8 with a 3.96 ERA. The next couple of years, however, saw a noticeable decline, mostly because of a decrease in velocity.

After being stuck in AAA for much of 2015, Straily decided he had to do something different. His changeup and slider had always been considered above-average pitches, but with his fastball velocity dipping into the high-80s, those pitches were becoming ineffective too. It was time for drastic measures.

In the off-season, Straily reached out to the experts at Driveline Baseball. Quickly, they got him on a weight-training regimen and throwing program that was designed to help Straily get his fastball back into the low-to-mid-90s. It worked, as Straily touched 94 this spring. (It has been in the neighborhood of 91-93 during the regular season.)

Then, after joining the Reds, pitching coach Mark Riggins suggested to Straily that he begin throwing a two-seam fastball more often. As noted in the Enquirer, Straily said that he’d never had much success with the two-seamer in the past, but Riggins taught him a grip that the pitcher found to be more comfortable than his previous grip. It seemed to work.

The result of all this tinkering: Straily has been extremely effective since joining the Reds. His first three appearances came out of the bullpen, but Straily quickly forced his way into the Cincinnati starting rotation. Since his first start on April 18, Straily is 3-2 with a team-best 3.36 ERA. He has been, by far, the biggest bright spot on a beleaguered Reds pitching staff.

This is the kind of baseball story that I love. Here’s a guy who was a nice prospect, but was on the brink of pitching his way out of baseball—his ERA in AAA last year was 4.77, and that’s not a number that will make many scouts sit up and take notice.

But Straily worked his butt off in the offseason, and made a couple of significant changes in the way he approached his job. That appears to have translated into very real improvements in his performance on the mound. Finally, at the age of 27, Straily seems to have finally secured a spot on a big league roster. The guy may be here to stay.

And the best part of that story, at least from the Reds’ perspective? Straily is under the team’s control for four more years after 2016. Not bad for a waiver-wire pickup.

Yes, it remains to be seen whether Straily can continue to be effective. The gains in velocity appear to be legitimate, but getting big league hitters out on a regular basis isn’t an easy thing to do. If you want to know my opinion, however—and yes, of course you want to hear my opinion—I think Straily can be a solid pitcher for this club for the foreseeable future. I don’t know that he’ll be in the rotation for the next good Reds team—although I wouldn’t discount that possibility—but I feel very confident that Straily can be, at worst, an effective reliever.

Talk about a rags to riches story. A couple of months ago, before he joined the Reds, August Fagerstrom over at FanGraphs said this about Straily:

At this point, he’s still a lottery ticket, but now, he’s like a $20 lottery ticket, as opposed to a $2 scratch-off. He still has to prove himself in the regular season before we can say anything definitive regarding the benefits of his offseason gains. But for the Padres to acquire a pitcher as young as Straily, with his kind of repertoire and his kinds of recent improvements in exchange for a 35-year-old catcher? That’s the kind of thing that can make a front office look real smart.

What about a front office that picked him up for free? This could end up looking like a stroke of genius from Walt Jocketty and company.

Plus, Straily was born in Redlands, California. It’s only appropriate that he end up with Cincinnati. Redlands to Redlegs. I like it.