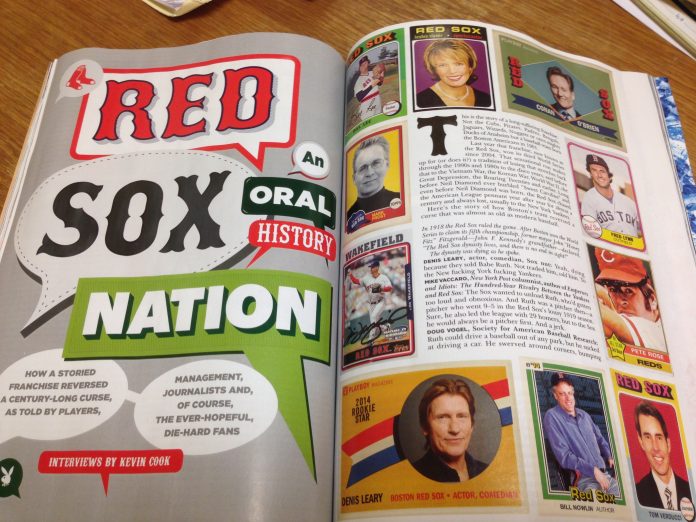 Pete Rose is in Playboy.

A horrifying thought, I know. But it’s true. A picture of Pete Rose does appear in the June 2014 issue of the leading name in men’s “adult entertainment” publications (AKA: nudey mags). Even more horrifying—I wanted to buy a copy.

A little context: The most recent issue of Playboy features an oral history of the Boston Red Sox, told from the perspective of former players, front office members, reporters, and a few celebs who consider themselves members of Sox Nation. I also learned, through the Twitterverse, that an old baseball card of Pete Rose was featured on the opening spread of the article. Why? What could the Hit King offer to an oral history of a Boston sports team? Was he quoted in the piece? Was some Playboy page designer too distracted by all the boobs to notice that Reds and Red Sox were two different entities? The article isn’t online yet—that was a fun Googling session—so in order to solve the mystery, I had to man-up and do what any responsible, diligent journalist would. I bought the magazine. My mother is so proud, I’m sure.

Purchasing a copy was a story in and of itself. The first spot I tried, a local coffee shop close to our office, didn’t have it. (Prudes.) Though of course, a very nice female employee did ask if she could help me find anything as I nervously glanced through the magazine racks. I quickly declined her offer while running away in embarrasment. I did manage to track down the issue at my second stop a few blocks away, at a newsstand that immediately seemed to fill up with customers the second I pulled the plastic-wrapped packaged off the shelf. I bought the June issue of Vanity Fair as well—featuring a dashing Jon Hamm on the cover—just to ensure no one would think I was some uncultured perv. The cashier seemed a little confused.

Anyway, I quickly discovered—after some carefully guarded page turning—that Rose is in fact quoted in the oral history, letting every boob-absorbed page designer at Playboy off the hook (for now).

Rose mainly commented on the famous 1975 World Series between the Sox and the Big Red Machine, his thoughts merely a few page inches away from a cartoon comic strip about a sexually depraved duck. Rose even related an entertaining story about the Reds having to train in a gymnasium at Tufts University while in Boston due to a few days of downpour during the series, and how a local gas station attendant (wearing a Sox cap) offered bad directions when the entire Redlegs club rolled up asking for help locating their destination.

In the end, mystery solved—Pete Rose’s appearance was no accident. Plus, proof that you can read Playboy for the articles.