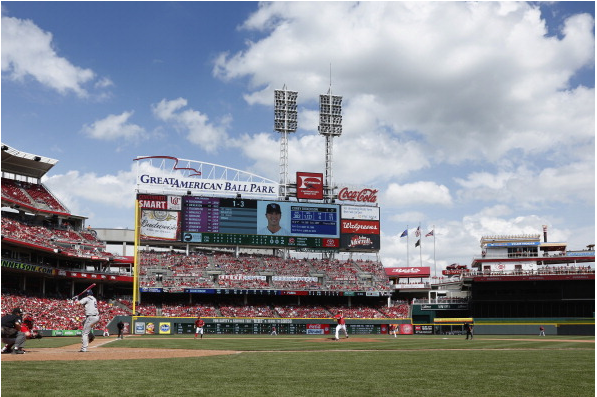 Baseball statistics are concerned with what something is. A player with a .300 average gets a hit in 30% of his at-bats. That is what he does. A lefty specialist reliever that has a .165 batting-average-against when facing left-handed hitters gets them out 83.5% of the time. This is what happens, this is what is believed to be true. Over time, these numbers gain more acceptance from the mathematical community, because every pitch thrown provides more data for which to corroborate findings. As is often heard, the larger the sample size, the more accurate the numbers.

A question that is too rarely asked is why or how these numbers exist. For certain numbers, there are explanations. Why does Joey Votto have a high BABIP? Well, likely because of his high line drive rate and low ground ball rate. Why are batters only hitting .121 against Aroldis Chapman this year? Well, I’m sure it has something to do with the fact he hurls baseballs 105 MPH less than a foot away from their cranium, testicles, and various other body parts that would be irreparably damaged if they were to be struck by said baseball.

Beneath the explainable statistics lies more statistics. To understand why a batter hits a certain way against certain pitchers (or vice versa), you tend to open up a wormhole of questions with no discernible conclusions. You turn into an annoying little kid jabbering at your parent, asking the same thing over and over and over agin. Why? Why? WHY?

Cincinnati’s Great American Ball Park is widely assumed to be a hitter’s ballpark. The stadium’s silly name (I know Great American is a bank, but the whole thing is way too cheeky for my taste; It’s like a goofy headline for a small-town daily being used every day) lends itself to the equally cheeky nickname Great American Small Park. I’ve never examined the concrete numbers behind GABP’s reputation, so I wanted to see if they still matched the perception of the field. I wanted to know what the numbers were. But inevitably, the why? sucked me in.

First, let’s get to the numbers. To varying degrees and by various methods, sites like Fangraphs and Baseball-Reference use park factors in evaluating which parks are more generous to pitchers and hitters. The numbers behind the calculations are daunting and I won’t even pretend to I understood them completely. (And by completely, I mean at all. If you care to occupy your spare time with frustration, here are a few explanations into the calculations.) The far-too-basic explanation is that a park factor is a measure of a team’s runs scored at home versus its runs scored on the road.

When these numbers are determined, smart people apply them to statistics to adjust for a numbers earned at a hitter’s park versus a pitcher’s park. Whenever you hear about a statistic that’s adjusted for the ballpark, it means it is applying this number.

(It should be noted that Park Factors are not a universally shared belief. It’s a nubile statistic that has kinks to work out, and many baseball nerds do not swear by it for that reason. But it is still one of the best ways to approximate ballpark factors, so we’ll take what we can get.)

For Park Factor (PF), 100 is considered neutral. Any number that is greater than 100 indicates that the park favors the hitter in that category. Any number that is less than 100 indicates that the park favors the pitcher in that category. Now before I go any further, allow me to alienate those of you that aren’t confused or completely checked out. This 100 number is not an estimate of runs or some tangible object. It is a factor related to runs, which is to say that any number above 100 means a player’s run total is inflated by a certain percentage. (At least, I think so. This is confusing stuff.)

That being said, turns out based on these numbers that GABP is in fact quite the hitter’s ballpark, but only in regard to one key aspect—home runs.

GABP has the third-highest average home run Park Factor between 2006 and 2013. (Note: I excluded stadiums that were built during that time, namely Yankee Stadium.) Its average home run PF over that stretch has been a whopping 110.9, just barely less than the White Sox (112.6) and Rockies (111.3), two other notorious hitter’s ballparks.

But seeing as the park factor only really tells us that yes, in fact GABP is especially generous to home run hitters, it doesn’t give us any tangible numbers to latch on to. So I looked for more concrete evidence that I could actually comprehend, combing through eight years of data on home runs kept by Greg Rybarczyk’s Hit Tracker for ESPN. I wanted to see some of the raw data instead of factoring in runs scored at home compared to ones away. I thought it may be useful, if not overly simplistic, to compare the raw home run data of the top hitters parks in terms of PF. Turns out, this only further proved that GABP is a great park if you like to hit home runs.

I took the five parks with the highest average PF (White Sox, Rockies, Reds, Orioles, and Rangers) and averaged all of the numbers Hit Tracker has between 2006 (the first year of tracking) and 2013. Here’s what I found:

Of the top five teams in terms of PF, more balls left GABP than any other park. Seems to me that this chart, coupled with the PF info, proves that GABP is in fact a hitter’s ballpark. We know this. But we still don’t know why, and the search for that reason proved far more difficult than proving the assumption.

I started to look at the dimensions of GABP. According to Major League Baseball Rule 1.04, Note A, any field built after 1958 should have “a minimum distance of 325 feet from home to the nearest fence…and a minimum distance of 400 feet to the center field fence.” That’s what the rule says, but the league minions are not exactly sticklers for meeting these seemingly easy requirements. There are at least five instances since 1958 (and probably a few more) where clubs have basically asked, So I know we aren’t supposed to do this, but can we please?, and the league basically said, Screw it, go ahead! As long as you get somewhere kind of close, or have an excuse, or wanted to make it look like the old one that you tore down, you’re probably good.

GABP is a small ballpark, measuring 328 feet down the left field line, 325 feet to the right field line, and 404 feet to center. It’s a pretty standard curve as well, without the sharp angles or weird corners that define other parks. The only oddity, and that’s using the term loosely, is that the left field fence is 12 feet high while the rest of the fence is 8 feet high. In essence, this park was made for hitting home runs.

Via ESPN’s Hit Tracker, below is an image of every home run hit in Cincinnati in 2012 and where they landed. The red line is an outline of the San Francisco Giants home field, AT&T Park, which allowed just 908 home runs between 2006 and 2013. 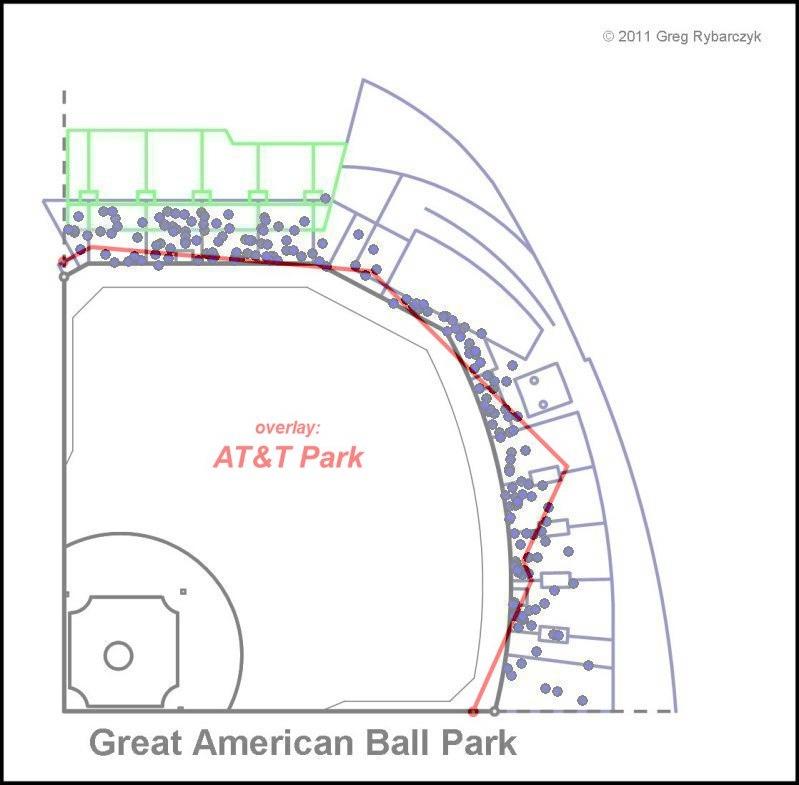 You can see that the dimensions of the park clearly play a role in the amount of home runs in a given park. But beyond that, the information dwindles. There are so many factors beyond just the park itself that should be explored, and even beyond the hitters and pitchers that play in said park. They change every year. There are atmospheric differences that are likely constant (Or are they? These are things I need to know!) that play at least some role in making a park conducive to hitting. There are wind patterns to account for, temperatures that affect air density. There is the psychological factor of pitchers being more nervous about missing their spots at a certain park because they know how easily it could turn into a home run, and batters hacking away for the same reasons. But in an age where there are minute details to explore seemingly every facet of the game, there is still plenty of room for people much smarter than myself to explore park factors in-depth.

There is more to the story than simply that “the park is small.” I want to know about the difference in flight patterns, the importance of the height of the wall, how to adjust for different temperatures and weather. These and many more questions could give the real answer as to why GABP is such a hitter’s park.

For now, we’ll have to just accept that GABP is in fact a hitter’s park, a park with smaller than average dimensions, a park that allows for a lot of home runs, and that is that. Asking anything beyond that has proven to be a fruitless labor. Guess I’ll have to just eat my French fries and shut up.