Home Sports Baseball Are The 2017 Reds For Real? 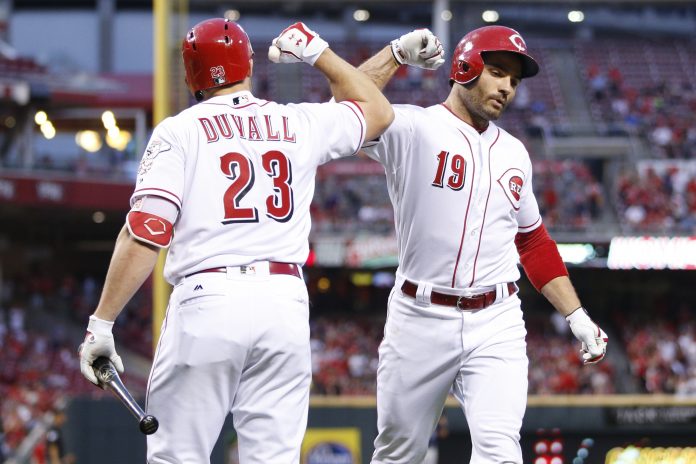 Remember how the 2016 Reds season wasn’t about the 2016 season? Well, 2017 isn’t about 2017, either. It is about 2018 which is, you know, pretty soon. Correspondingly, you might have noticed that the baseball has been a little more interesting out at GABP than it was last year.

And interesting baseball is what you can expect to see. Not always good, necessarily. But interesting. As the Reds spend 2017 figuring out 2018, we’re all going to be in for a wild ride. But this early in the year, it can be hard to tell what’s real and what’s just typical start-of-the-season weirdness. Let’s take a look.

Real
The new Bryan Price. We all thought that we were getting a new-school innovative manager a few years ago when Price was hired. It didn’t happen. But this year, we’re seeing elite relievers as soon as they’re needed. The ninth inning is no longer deemed the most important part of the game. This doesn’t appear to be something likely to change.

The new front office. Remember how Drew Storen struck out the side the other night? Drew Storen was bad last year, if you go by the old metrics, but Dick Williams signed him because his peripheral stats were still good. And that’s sure working out so far. The front office also has to get at least some credit for the way the bullpen has been used in that they either told Price how to approach it, or took the shackles off and let him do what he wants.

The bullpen. The change in quality can best be illustrated by looking at what happened on April 9, when the Reds beat the Cardinals 8-0. Tony Cingrani finished that game with a scoreless inning. Last year, Cingrani had 17 saves. Now he’s the guy they bring in up 8-0 in the ninth. This isn’t a knock on Cingrani. He’s a solid pitcher. The point is that if he’s your blowout reliever, then the rest of your pen is pretty dang good. The horror show of last season is gone.

Amir Garrett. The rotation is going to be in flux all year, but I’ll bet on Garrett sticking. I’ve been shouting about him since he was called up to Louisville last year, and he’s certainly opened plenty of eyes in Cincinnati.

The Cincy-Louisville shuttle. The Reds spent the first two weeks sending players back and forth from Cincinnati to Louisville, and that’s not about to stop. Dilson Herrera and Jesse Winker are in the minors still. So is Sal Romano. And those are just the frontline guys. It’s probably best to think of the Reds as a team of about 32 players who are all used at different times. This is the year everybody gets a shot as the Reds figure out who’s got it and who doesn’t.

Mirage
First place. Sorry kids—it’s not very likely to stay this way. However, don’t be surprised if the Reds hang around the wildcard race all season. They’re currently 9-7. If they play .500 ball the rest of the year (a very real possibility), they’ll be part of the last-playoff-spot conversation right up until the end.