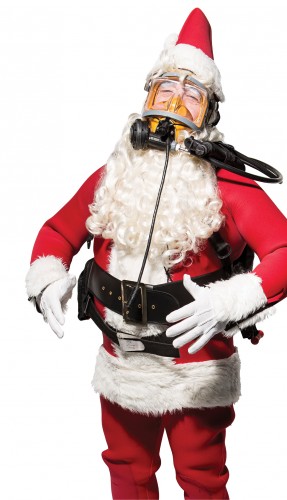 Since 2003, visiting Scuba Santa at the Newport Aquarium has become as much of a Cincinnati holiday tradition as the Zoo’s Festival of Lights and ice skating on Fountain Square. The man responsible for spreading that Christmas cheer—and fending off fish—is Ed Evans, who’s been donning a Santa hat and red wet suit for more than a decade.

“Anytime you work with animals, something is going to happen. Denver, the sea turtle, loves to grab the pompom on Scuba Santa’s hat. Once, he got ahold of the mask and almost ripped it off Santa’s face. That’s why the ‘elves’ are so important to Santa in the tank—they act as the eyes in the back of his head. There are so many things behind the scenes that make this work. It’s like a Broadway show.

In 2005, a reporter from The New York Times came to see the show. The story spread like wildfire. I did live shows for Good Morning America and Today. Lynn Margason, the Aquarium’s former PR director, had the foresight to register Scuba Santa as a trademark, so we have the only Scuba Santa in the country. Other places do a similar show, but they have to use a different name.

We’ve been run out of the tank a couple of times when the animals get too frisky. The sharks are what you’re worried about. If they’re going after another fish, we say the shark is ‘taking a snack’ and then we want to be out of the water. It’s not that they’re interested in Scuba Santa, but right around Scuba Santa is a fish about to get eaten.

The sharks at the Aquarium are not tamed. They get used to the divers, but there is no such thing as a tame shark.

I’ve been on shark feed dives in the Bahamas and had them swim beneath my arm and between my legs to get to the food. We are not on their menu. Anytime a shark bites a person, it’s nothing more than mistaken identity.