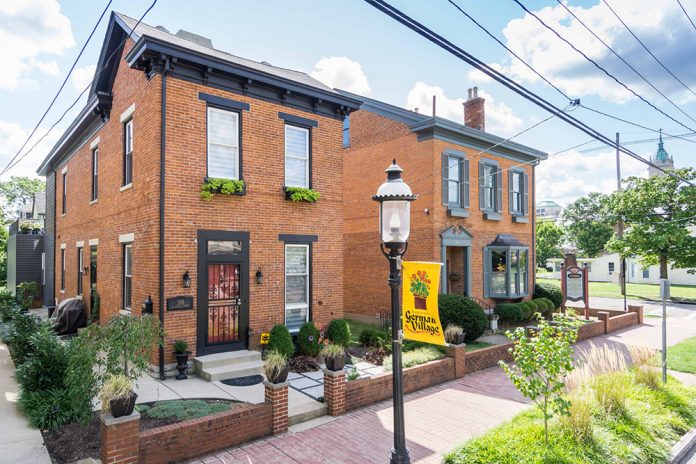 Still think of Hamilton as a depressed post-industrial river town? Swing by for a visit and you’ll likely reconsider that opinion. Today, thanks to a team effort between city administrators and groups like the CORE Fund (the Consortium for Ongoing Reinvestment Efforts, which is essentially Hamilton’s version of 3CDC), the bustling city of 62,127 is home to a burgeoning arts scene, urban revitalization not unlike what’s happening in OTR, and residential gems like this.

Owners of a local cigar shop named Henry and Mary Segers built this home in 1850 on North Second Street, the south edge of a now nine-block historic district called German Village. Named for the heritage of its early residents, the neighborhood is a stone’s throw from Marcum Park and the Great Miami River, and a short walk from Hamilton’s downtown business district.

When Joshua Smith purchased the place in 2013, German Village was heavily populated with subdivided rental properties. Unlike many neighboring structures, the Segers home likely stayed a single-family residence up until the late 1900s, when it served as a law office. Smith hired architect Mike Dingeldein, a Hamilton native, to convert it back to a single-family home with an updated kitchen and enormous upstairs bath clad in Carrara marble.

Mitchell Willis and Jon Yslas bought the place from Smith in 2014. Dingeldein completed additional renovations for them, including designing a 1,000-square-foot, two-story addition that includes a second bedroom and bath and a two-car garage with a 25-foot by 25-foot rooftop deck. (It’s the home’s “most talked-about component,” says Willis, thanks to festive outdoor lights and numerous social and charitable events the couple has hosted up there.) Willis and Yslas also added small details with big punch, like reclaimed wood accents in the main living spaces by Hamilton’s own Unsung Salvage Design Co.

Today, the home—which sold in two days this past October for nearly double what Willis and Yslas paid—is prepping for new owners. If the sale price of this property and its short time on the market are any indication, it’s safe to say Hamilton’s resurgence is indeed going strong.