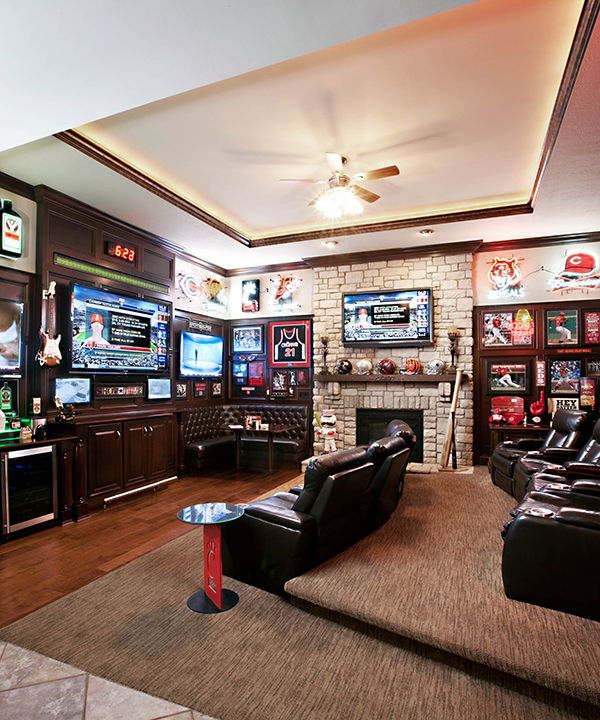 In late January, Sherry Gregor was expecting company. “The Reds Caravan is coming,” she said. “Marty Brennaman is coming to my house.” Gregor, a life-long Reds fan, won the Reds Caravan Home Takeover contest with an essay explaining why the team should stop by, but she could’ve easily won on the strength of photos alone.

What was once a typical 500-square-foot family room is now a sports bar, complete with neon signs, a constantly updated sports ticker, and six flatscreens. “That’s how we got this whole idea,” Gregor explains. She and her husband Keith, a former UC basketball player, wanted to watch two different football games at the same time. “There was only one TV in there,” she says, “so we dragged another one in from the basement. That was kind of the ah-ha.”

To make that arrangement a little more permanent, the Gregors connected with
Doug Roth of Transformations Custom Wood Design. The design process took a bit of back and forth. “There were a number
of changes,” Roth says. The original plan called for the bar to be along the fireplace wall, but to give more room to the second row of reclining seats, they rotated it 90 degrees.

After the project was completed, Roth posted photos on the Houzz, a Pinterest-like website devoted exclusively to home design. The photos generated a lot of feedback, some of it not very kind. “There were people who said, ‘I hate sports, I’d never do that,’” Gregor says. “Of course you wouldn’t! But we love it. It works for us.”