Tucked away from the main drag on a tree-lined street, this four-bedroom three-bath home at 20 W. Orchard Rd. is just steps from the 70-acre Ft. Mitchell Country Club. This is the heart of the Old Ft. Mitchell Historic District, an early 20th century neighborhood that’s one of the area’s original “streetcar suburbs.”

The entire neighborhood shows diversity in architectural style, with examples of more common American Foursquares, Tudors, and bungalows, along with examples of less-seen French Eclectic, Spanish Eclectic, Craftsman, and Mission Revival structures. Architect Lanham Robertson was responsible for the design of many significant homes in the neighborhood, and this brick abode is attributed to him. Built in 1910 for Louis Fritz, who was then president of Fritz Mineral Water Company, a business started by his father in 1873, it’s noteworthy for its shaped roof dormers with stone coping, an element inspired by the Mission Revival style.

The full-width porch, with its brick posts and angled brackets overlooking the front yard, creates a welcoming facade. The porch is deep enough to offer cooling shade, and large enough for sitting and visiting with friends.

Beveled glass sidelight and transom windows pop against the dark wood of the massive front door, making for a grand entry into the wide and airy foyer, which features gorgeous parquet floors. Turn right, and you’ll find pillars framing the entry to the first living space, anchored by a mint-green tile fireplace.

To the left of the foyer, pocket doors hide a dreamy living-room-slash library with plenty of space for gathering, reading, or entertaining.

The sunny kitchen radiates happiness with its yellow walls and muted cabinets but also features finer touches like stainless appliances and even a separate space for barware above the wine fridge. Nearby, you’ll find a bright breakfast nook and a door leading out to the backyard.

Upstairs, more stained glass adds charm to the split stairwell and hardwood throughout creates warmth in the hallway. The owner’s suite is actually two rooms—one for sleeping, and another that’s just begging for a set of cozy chairs around the fireplace. With plenty of windows, natural light abounds in this space. 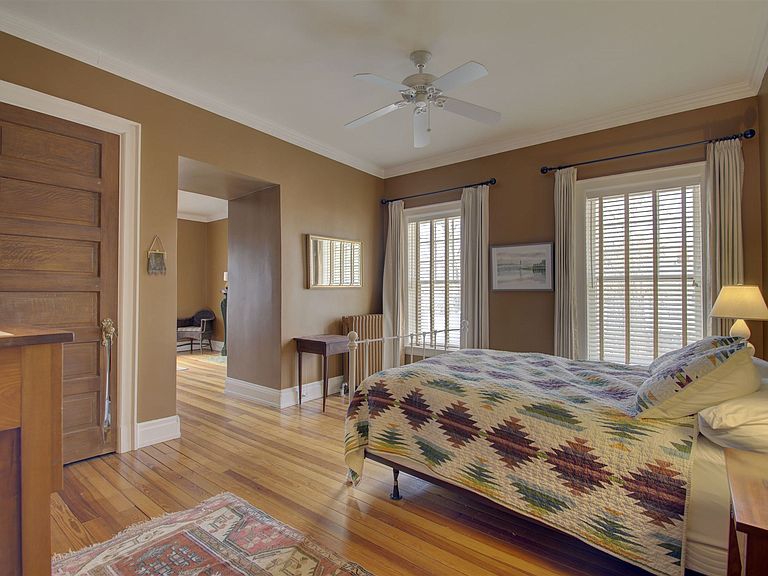 The second floor also features three more bedrooms with similar finishes, as well as a few bathrooms. But the most exciting part of the home, perhaps, is its potential. The third-floor attic is only partially finished, so channel your inner Chip and Joanna Gaines to turn the third floor into a swanky hideout, an in-law suite, a playroom, or a killer office. There’s plenty of opportunity to let your creative juices flow.

And if you are the creative type, the detached-garage-slash-artist-studio is a dream come true. The three-car garage still sports its original Mission tile roof. (It would have twinned with the main house, which now is topped with regular shingles.) The garage offers plenty of storage, and the second level has been converted into a partly finished studio with built-in shelving, hardwood floors, and a set of doors that separate the unfinished space.

It’s not often that a you see a 111-year-old house so well-suited for 21st century family life. But this one certainly is, especially when you consider that it’s also located in the sought-after Beechwood Independent School District.