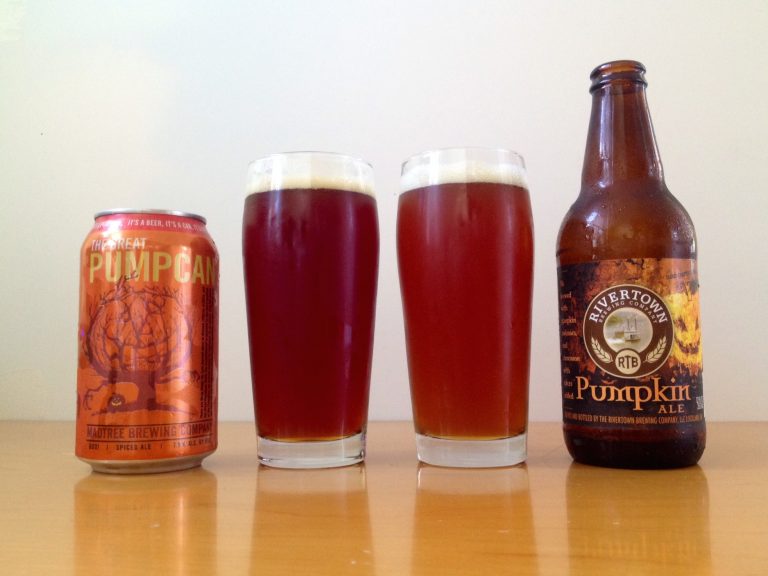 There’s something about fall’s changing foliage and crisp air that makes us go pumpkin crazy. Me, I’m a recovering pumpkin spice latte addict who prefers to eat squash, not drink it. But even though gulping pumpkin isn’t my thing, pumpkin ales can really warm up a nippy fall night, so I drink them anyway.

The MadTree cans and Rivertown bottles are still the easiest to find, and it’s worth trying both because these breweries take pumpkin in two totally different directions:

The Great PumpCan, MadTree Brewing Company
There’s not any actual pumpkin in it, but PumpCan (7.9% ABV) still tastes a lot like pumpkin pie. Six malt varieties give it a thick, full body. It’s super toasty, but at the same time deeply sweet and sticky (molasses is used). Most of all, it’s big on spice (cinnamon, nutmeg, ginger, and allspice), the aromas of which come out more as it warms. This is the kind of beer I’d drink for dessert.

Pumpkin Ale, Rivertown Brewing Company
There’s molasses and cinnamon in here too, but also the delicate flavor of real pumpkin. This one’s much lighter in body and color, and easier drinking at 5% ABV. The spicy, tickling cinnamon really comes out as it warms, more so on the nose than the palate. Lighter and crisper, this beer can take the gluttonous edge off of a slice of pumpkin or pecan pie (preferably of the Frisch’s variety).