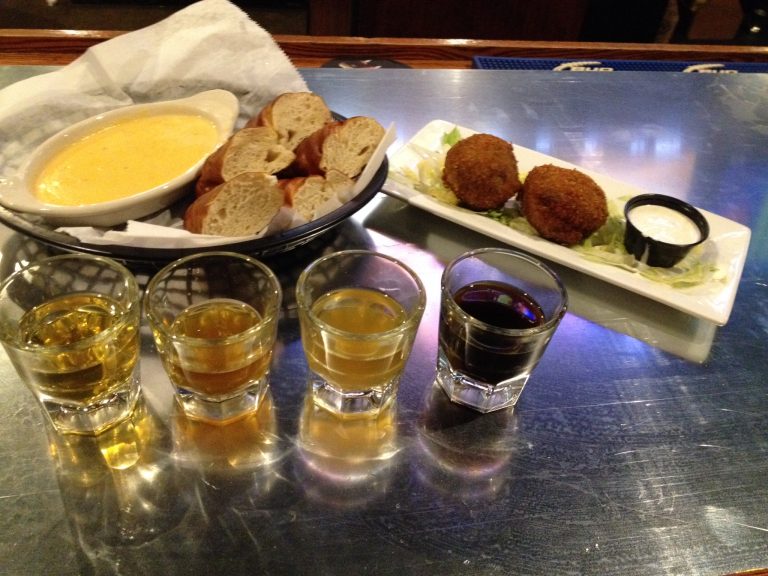 The first craft brewery on the West Side opened on December 19, and while we hoped the name—Tap & Screw—was a shameless pun, it’s really a local historical reference. Cincinnati Milacron was in fact initially dubbed Cincinnati Screw and Tap Company. All jokes aside, with a name like that, you know this place has to be fun, and it is. Unless you hate sports bars, in which case go home, fancy pants. Owners Tom and Jerry (the hits just keep coming!) Lorenz bought the space in 2011 and operated it as Tom & Jerry’s Sports Bar, closing for just a few days before reopening with a new sign, a revamped menu, and a shiny brew house on full display in the dining room. Even with the new on-premise brewery, it mostly still feels like a sports bar: loud, with no shortage of big screens, a Jägermeister tap sitting proudly on the bar, and tastings served in rocks glasses.

Tap & Screw offers three of their own beers on tap: an IPA, mocha porter and kölsch, with a double Belgian ale coming soon. The porter was the best of the bunch, and though they’ve got some kinks to work out (namely, carbonation—or lack thereof—and taming the hops bitterness), the brews show promise. There were nine other (mostly local) beers on tap, including Rhinegeist’s Blue Saison and Old Firehouse’s Pin Up Girl blonde ale, along with Angry Orchard and the less crafty Blue Moon. The bar is fully stocked with liquor, and there’s a local wine list too.

The menu is your standard pub fare—burgers, sandwiches, and apps aplenty. Chuck’s Homemade Goetta Balls (we’re still not convinced the name isn’t at least a smidge bawdy) were surprisingly good, and this particular blogger rarely eats goetta. The pair of fried, almost-baseball-sized fritters of sausage, feta cheese, green and red bell peppers, jalapenos, and onions were crunchy on the outside, gooey on the inside and perched proudly on the plate like the finest family jewels. The beer cheese, served with Servatii’s pretzel sticks, was also legit (in that it had the requisite tang of dry mustard), and I’d come back to try the Smokehouse burger (third-pounder with Pepper Jack, lettuce, tomato, barbecue sauce, bacon, and onion straws on a pretzel bun) with the mocha porter.