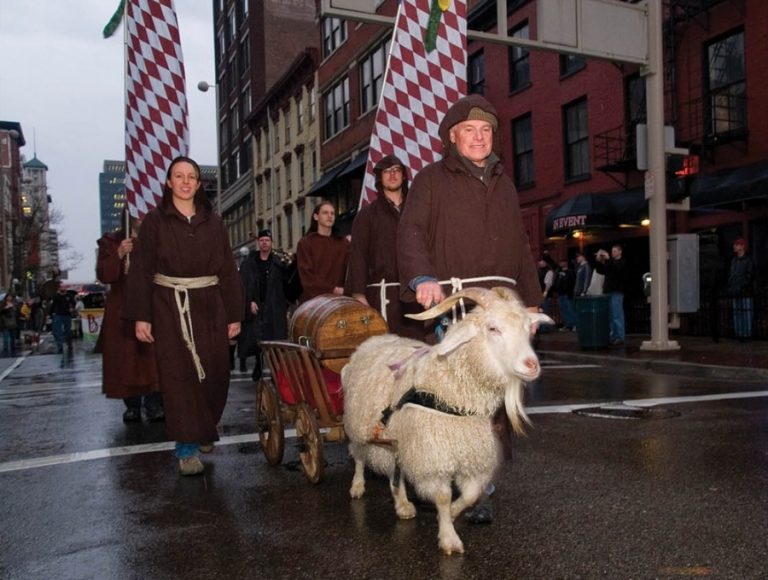 Are you familiar with the Cincinnati rite of Spring known as Bockfest? No? Then perhaps you should look to Zachary Petit’s 2015 story on the annual tradition. Already up to speed with Sausage Queens and goats? Then you’ll enjoy this Friday’s prelude to the festivities: Precipitation Retaliation Happy Hour.

The story behind the tradition, as self-proclaimed Bockfest czar Mike Morgan explained to Petit, starts with a 2008 blizzard. With all the snow that year, the police revoked the permit for the parade, and even though a few hundred hardy souls made the trek from Arnold’s to Bockfest Hall, it wasn’t a sterling example of what the event could be. So, at a meeting to discuss the 2009 Bockfest, Morgan decided there needed to be some response to the blizzard: “We need a ritual. We almost need to, like, sacrifice something. Steve Hampton [a long-time Bockfest partner] says, ‘Well, maybe we should burn a snowman.’ And I look at him like he was an idiot, and say, ‘How the hell are you going to burn a snowman?’ And he looked at me like I was an idiot, and said, ‘An effigy, obviously.’ ”

Clearly, the ritual works: It hasn’t snowed at Bockfest since. (Currently, there’s a 40% chance of rain/snow showers on March 4, with a high of 48 degrees. And that’s before the snowman burns!) To watch this year’s Precipitation Retaliation, head to Milton’s, on Friday, February 26, from 5:30 to 10 pm. The burning starts at 8.

Still can’t wrap your brain around it? Check out this slideshow from the 2015 version of the event, from Bockfest’s site: