Christmas Beer: Dad, Rhinegeist
This holiday red ale with notes of malty caramel and a touch of piney hoppiness makes us want to bust out our matching plaid pj onesies and raise a toast to the season by the warm glow of the fireplace. Available in cans or on draft at the Rhinegeist taproom through November and December, it’s been an annual release for the past three years, cementing its place as a favorite yearly reminder Christmas is just around the bend. 1910 Elm St., Over-the-Rhine, (513) 381-1367, rhinegeist.com

Cheap (and Good) Bloody Mary: The Gruff
Hand over a fiver at this Covington spot hard against the Roebling Suspension Bridge, and you’ll get back a pint glass filled with a house-made smoky mix that gets some richness from milk stout (!), some tang from Worchestershire, and some heat from chipotle hot sauce. You’ll want a second round, and you won’t need a second mortgage to finance it. 129 E. Second St., Covington, (859) 581-0040, atthegruff.com

Rooftop Bar: AC Upper Deck
New to The Banks this summer, AC Upper Deck delivers the ultimate goal of the rooftop bar: an incredible view. There are unobstructed sightlines (from strategically placed seating) of the Roebling Bridge and of downtown and its skyscraper-studded skyline. The beer selection is large. The location is convenient. The cocktail and wine lists cover the staples. But we’d be fooling ourselves if we said we needed any other reason to visit besides those views. 135 Joe Nuxhall Way, downtown, (513) 744-9900, acupperdeck.com

Escape Room Alternative: Puzzle Crawl
What do you get when you mix escape room puzzles with trivia, a scavenger hunt, and a pub crawl? Puzzle Crawl, of course. Once a month, teams (four to eight people) tackle themed puzzles across four stops over three hours for a chance to win prizes. Join as a team or be matched with other single players, and let the hilarity ensue. puzzlecrawl.com

Local Cider: Sons of Toil Brewing
The red barn at the corner of Klein Road and Ohio Route 32 in Mt. Orab looks more like a farm stand than a brewery. But the fruit you’ll find here comes in the form of hard cider. All four varieties—apple, berry, raspberry, and strawberry pear—are crisp and fruity, but not too sweet or too overpowering. Some things are just better in the country. 14090 Klein Rd., Mt. Orab, (513) 431-5078, sonsoftoilbrewing.com

Taste of the Past: Antique Hour at Cork ‘n Bottle
On Thursday nights, Cork ‘n Bottle in Crescent Springs becomes a bourbon time machine. Brad Bonds is your guide. The vintage bourbon curator offers tastes from what he calls “dusty bottles,” meaning brown spirits produced in the 1990s and earlier, and guides you through the differences between bourbon then and now. Bonds usually has 10–12 bottles open at a time, and “when they’re gone, they’re gone,” he says. He can also arrange private tastings for small groups if you’re interested in exploring more of his bourbon library. 584 Buttermilk Pike, Crescent Springs, (859) 261-8333, corknbottle.com

Non-Sporty Sports Bar: Second Place
This is the perfect spot for the more low-key sports fan. We’re talking surround-yourself-with-second-place-trophies low-key sports fan. There’s the usual large TVs and a fantastic beer selection for those looking to actually catch the game. But there are also board games, a pool table, and bourbon slushes for those who’d rather just imbibe, game-adjacent. Oh, and don’t forget the non-sports-related activities, such as back-patio movie showings and intimate artist meet-ups. There’s some decent flatbread, too. 3936 Spring Grove Ave., Northside, (513) 417-8468, secondplacebar.com

Charity Drink Program: The Littlefield
Since this bourbon bar opened in 2014, it has championed a different charity each month with its featured drink program. Each highlighted nonprofit gets a custom cocktail, like October’s Teacher’s Pet with rye whiskey, apple juice, and caramel syrup, benefitting the Parker Woods Montessori PTO. The program donates $1 from each beverage sale to the charity of choice, and it’s so sought after among local organizations that there’s a one-year waiting list. In the name of goodwill, we can drink to that. 3934 Spring Grove Ave., Northside, (513) 386-7570, littlefieldns.com

A Week of Winesdays: Embrace your love of the grape all week long with these special deals.

Monday
Not only is Grandview Tavern in Ft. Mitchell open for dinner on Monday, you can kick off your week with a half-price bottle of wine. 2220 Grandview Ave., Ft. Mitchell, (859) 341-8439, grandviewtavern.com

Wednesday
Hyde Park’s The Wine Merchant has one of those magical WineStation systems that keeps bottles fresh. Pours are half-off on Wednesdays from 4 to 7 p.m.
3972 Edwards Rd., Hyde Park, (513) 731-1515, winemerchantcincinnati.com

Saturday
This is peak weekend, so deals are hard to come by. Stop by DEP’s Fine Wine and Spirits and peep the clearance corner where select vintages are two for $5.99.
424 Alexandria Pike, Ft. Thomas, (859) 781-8105, depsfinewine.com

Proud supporters on our friends over at @pedalwagoncincy 👊Now offering peddlers **$5 wine cocktails** and $2 off local drafts 🍺 Pull up, jump out and come revel. We got you! #suppoetlocalbusinesses #partylife #winecocktails #comerevelwithus 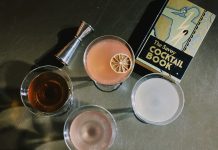 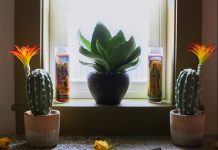 Gorilla Cinema Opens A New Day of the Dead–Themed Bar