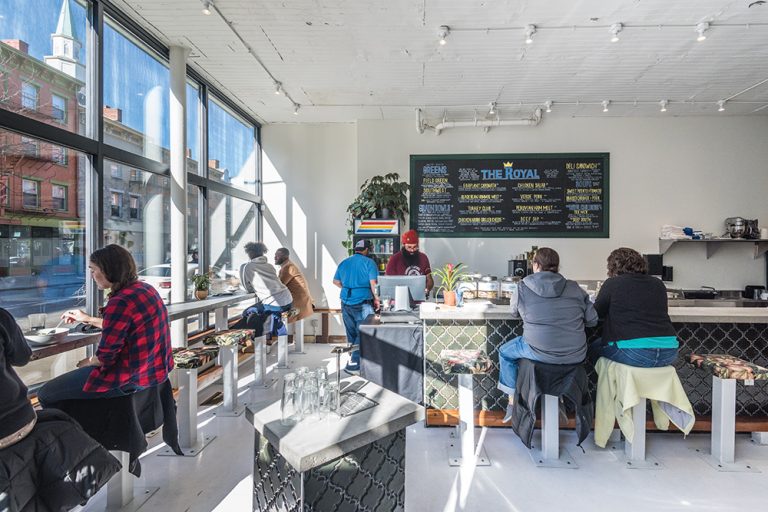 The ethos of The Royal can perhaps best be summed up by a September 7 Instagram caption from its second day in business: “All sauces, mayos, spreads, soups, chilis, dressings, and stocks made in house. If it can be bought local, we do. Things just taste better this way, and it’s better for you. So we would like to not have to type ‘local’ and ‘house made’ over and over. Thanks.” That is: good food, no bullshit. And we would expect nothing less from the guys who gave us Liberty’s Bar & Bottle. As for their foray into food, “The neighborhood needed some gaps filled,” says co-owner Tom Stephen. If we may read between the lines: Main Street had reached peak pizza…and then some, without much else.

The corner occupied by The Royal is now a bastion of salads, soups, customizable farro grain bowls, and gourmet sandwiches—with no timidity when it comes to pickled veggies. We are particularly in love with the eggplant caponata sandwich (with olives, capers, cilantro, cashews, jalapeños, and more, on Sixteen Bricks bread), the field greens salad, and anything we can douse with the cilantro-lime vinaigrette. And on cold days, their sweet potato soup and pork verde sandwich have kept us sane. It is all fresh, but it’s not all so pure: Friday and Saturday nights they serve grilled cheeses (the chicken adobo is a hit) and chili dogs, Cincy and Tex-Mex style, until 3 a.m.